Bullish sentiment for Bitcoin is gaining renewed momentum. Investors and financial experts are suggesting a variety of catalysts to explain Bitcoin’s rally, such as regulatory softening by some governments and new technological developments. Even PayPal’s Chief Financial Officer now predicts that Bitcoin might become a favorite payment method. In the meantime, Coinbase and Bitfinex are implementing SegWit to reduce transaction costs.

Bitcoin’s current rally has many drivers. One of them is regulatory softening towards cryptocurrency. In this regard, CNBC reports, Brian Kelly, the founder and CEO of BKCM LLC, points out that one of the catalysts for the cryptocurrency’s rally is the fact that the Wyoming House of Representatives unanimously passed two crypto-friendly bills: House Bill 70, and House Bill 19.

House Bill 70 is entitled “Open blockchain tokens-exceptions.” According to State Representative Tyler Lindholm, Bill 70 “exempts initial coin offering [ICO] tokens issued on an open blockchain from Wyoming’s money transmitter and securities laws, as long as the token has not been marketed as an investment and is exchangeable for goods or services.”

On the other hand, Bill 19 is entitled “Wyoming Money Transmitter Act-virtual currency exemption,” and it exempts cryptocurrencies from the state’s money transmitter laws.

Kelly also suggests that another catalyst for Bitcoin’s rally is the South Korean government’s shift from a very hostile stance towards cryptocurrencies to a more supportive attitude, encouraging “normal” crypto trading. 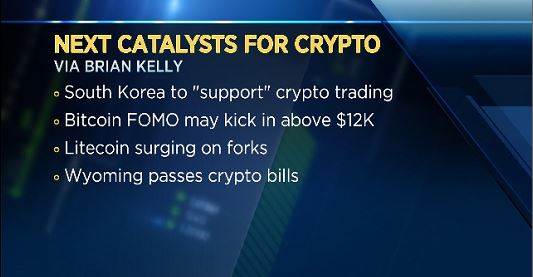 As a result, Kelly concludes:

The sentiment has changed here, which to me is going to start bringing in more investors to the space.

Moreover, John Rainey, CFO of PayPal, is also optimistic about Bitcoin’s future, predicting that Bitcoin will become a popular payment method. When The Wall Street Journal asked him whether “Crypto or bitcoin [will] ever be popular as payments?” Rainey replied:

At some point, there is a very high likelihood. The technology, there is real merit to it. I do think, though, it will be years down the road before we see the kind of ubiquity and acceptance that make it a form of currency that is used every day.

Most importantly, Bitcoin is gradually but surely solving its problem with scalability. Indeed, new schemes and technologies such as Segregated Witness (SegWit), Lightning Network, and Atomic Multi-Path Payments over Lightning, are being implemented to facilitate near-instantaneous low-value Bitcoin payments.

For example, leading Bitcoin exchanges, such as Coinbase and Bitfinex are already implementing Segwit to trade Bitcoin.

Our engineering team has finished testing of SegWit for Bitcoin on Coinbase.

We will be starting a phased launch to customers over the next few days and are targeting a 100% launch to all customers by mid next week.

In one of its earlier announcements regarding the SegWit implementation, Coinbase explained:

As a result, Bitcoin has been able to withstand threats and hostile actions from bankers, governments, and world financial authorities. And, once again, as the chart above suggests, the cryptocurrency is starting to attract investors with renewed enthusiasm.

How do you think the softening of restrictions will affect Bitcoin’s value? Let us know in the comments below.