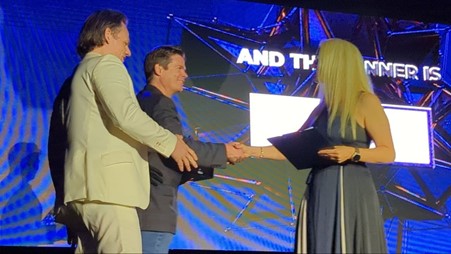 ABEY and the ABEYCHAIN have been awarded the Blockchain Solution of the Year at AIBC Europe 2021. Celebrated on November 16th in Malta, this event honors international emerging tech projects by inviting investors and innovators from the Fintech, Artificial Intelligence, Quantum Technology, Big Data, IoT, and the Blockchain industry.

ABEYCHAIN has quickly become one of the most exciting and fastest-growing projects in the crypto industry. This award represents its latest milestone and was granted based on the recommendation of a panel of experts with a background and deep knowledge of blockchain technology and popular vote.

ABEYCHAIN was upgraded in March 2021, with its native token ABEY, as a public blockchain that leverages a double consensus mechanism. ABEYCHAIN uses Proof-of-Work (PoW) and Delegated Proof-of-Stake (DPoS) in a hybrid model that allows the network to provide users with the advantages of both consensuses without their tradeoffs.

This model is ABEY’s solution to the blockchain trilemma, a viable way to offer low-cost transactions with efficiency without putting the network’s decentralization in jeopardy. In addition, ABEYCHAIN has become an ideal hub for developers looking to create dApps on an interoperable blockchain with cross-chain capabilities.

Philipp Sauerborn, Co-Founder and Director of the ABEY Foundation, claimed that the award represents a “significant” step for the team behind the project and the community that backs its ecosystem. Sauerborn added:

This prestigious recognition is the result of countless hours of hard work from our ABEY team and the developers running their apps on our blockchain. We are committed to growing the ABEY ecosystem in order to bring our users the best solution that we possibly can. We are so grateful AIBC and its expert panel of judges has noticed our passion and excellence.

ABEY Takes Another Step Into The Future

Despite its relatively recent launch, ABEYCHAIN records an impressive number of active users with 140,000. Attracted by its features and an ecosystem comprised of a decentralized exchange, interoperability, smart contracts, liquidity mining opportunities, staking, ABEYCHAIN has managed to add 10,000 users since August 2021.

This has placed ABEY amongst the Ethereum Killers, a position occupied by some of the strongest ecosystems in the crypto industry, such as Binance Smart Chain, Solana, and Cardano. The platform continues to grow to add more use cases and dApps to its already fast-expanding ecosystem.

Therefore, it seems poised to continue to attract the attention of users with interest in leveraging decentralized finances, building their own application, or looking to become ABEY holders. Eman Pulis, a founder of SiGMA and owner of AIBC, said:

“Congratulations to ABEY for being awarded the AIBC Europe 2021 Blockchain Solution of the Year. AIBC is an intersection for excellence in the international blockchain community and we are thrilled to award this prestigious accolade to the ABEY Foundation. Your award was majority based on our expert judging panel’s evaluation, as well as a smaller component of public voting. Every developer running their dApps on ABEYCHAIN, every user of ABEY’s XSwap.com DEX, every holder of ABEY cryptocurrency should feel proud of your achievement.”