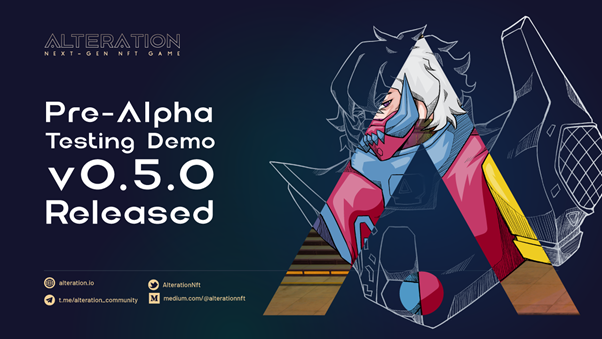 Alteration, the first game powered by next-generation Natural Language Processing (NLP) Artificial Intelligence, announced that the next version of its NFT gaming platform, the Alteration Pre-Alpha Test Demo v.0.5.0, has been released on January 28th.

Alteration is a cryptographic NFT game based on a futuristic cyberpunk world with elements of Norse mythology that has a Play-to-Earn mechanic.

With v0.5.0, Alteration users will be able to enjoy a new battle system. Moreover, the update adds support for ultra-wide screens, fixes random encounters during screen loading, and improves the gameplay.

Alteration is designed to integrate AI into its game, which will allow in-game locations and their descriptions to be generated using natural language generation, while the AI ​​will generate quests, making each match a unique experience.

In Alteration, the integration of NPL in the non-player characters (NPC) allows the creation of next-generation interactive characters. These characters can create unique stories with interaction  in seconds, and it is even possible to “talk to them about anything“.

On the release of Alteration v.0.5.0, the team noted that:

“This update is the first of many to come throughout 2022. We are planning to constantly release updates for players to play until the full release of the blockchain. In these updates, bugs will be squashed, the game will be balanced, and more features and content will be added throughout the world of Alterra.”

The team has indicated that it hopes to launch the first interactive introduction to its AI by the beginning of next February. This update will coincide with the introduction of a new boss, Gusir, which will be the biggest challenge in Alteration to date.

Created by Space Engineers visionary Tomáš Pšenička, Alteration combines the use of Artificial Intelligence and Free-to-Play (F2P), Play-to-Earn (P2E) gaming, leading the charge head-on into the future of Web 3.0 gaming.

This industry-first combination is enabling Alteration to create a fully interactive, AI-enhanced Web 3.0 game that turns players into co-creators of the platform, giving them control over the gaming experience.

Alteration’s P2E game mechanics allow players to combine various ways to win while playing the game. In addition, since all game items are NFTs,  the world of Alterra creates its own economy and Marketplace around the game.

Gamers can experience the immersive world of Alteration in their Pre-Alpha Testing Demo v0.5.0.