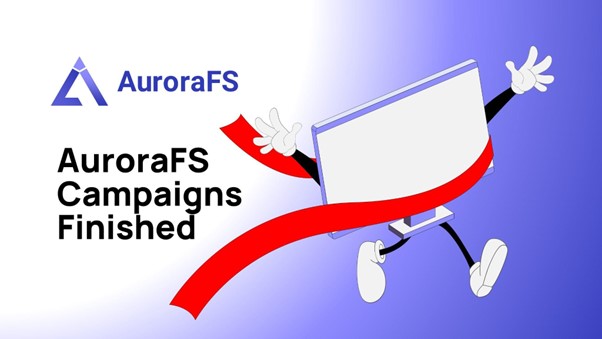 On Sunday 29 May, two final rounds of campaigns came to an official end for the AuroraFS P2P cloud storage and distribution network. One campaign focused entirely on the AuroraFS decentralized blockchain network and its function of providing bandwidth for DApps which run and rely upon the peer-provided global broadband capacity, while the other campaign focused on the first of several planned decentralized applications developed by AuroraFS contributors.

The non-staking broadband mining campaign focused on bandwidth that is supplied to the AuroraFS network, and rewarded miners for their broadband contributions with future airdrops expected to be shared over the next few weeks with campaign winners. The AuroraFS playback campaign was more specifically, a video playback campaign that was designed to reward the top 500 video viewers as it measured a metric called flow energy.

A few Details About The Playback and Mining Campaigns

Flow energy measures the specific amount of time a node spends engaged in watching video content on the Web3Tube platform. The top 500 nodes to watch video content during the contest period which ran from April 27th until the 29th of May, will be airdropped future AUFS tokens according to the flow energy attributed to their individual nodes.

An increasing number of creators are searching out platforms with individuals who watch more video content since it’s an important measurement. It would seem the video playback campaign in particular could help encourage the practice of viewing content to assist in organically building the viewership on the still-not-fully-released decentralized video storage and sharing platform – Web3Tube.

In the other contest, the non-staking broadband mining campaign was strictly centered around mining and providing the much needed peer-provided global bandwidth needed for decentralized data storage and streaming services on the AuroraFS network. Broadband miners had to first download the latest version of AuroraFS and then follow steps to begin dedicating bandwidth to the network in exchange for future airdropped AUFS tokens.

The measurement used to calculate the amount of bandwidth provided by each individual node to the AuroraFS network is called a cheque. The more cheques accumulated by each miner, the more future AUFS airdropped tokens would have to then be delegated. The number of cheques was set at 5,000 to be the equivalent to each single AUFS token. Initially both the playback and mining campaigns were due to end on the 27th, but due to a significant number of mining machine nodes being unable to execute cashouts in full, both contests were extended an additional two days to May 29th.

Now that the video playback and non-staking mining campaigns have officially ended, AuroraFS can set its sights on the launch of the full version of the decentralized blockchain network and its accompanying network coin. Both are anticipated for full launch in the third quarter, on a date that has not been revealed. As AuroraFS gets prepared for the quickly approaching Q3 launch, an evolved focus has been recently devoted to DApps, and the development of fresh applications that can and will ultimately run on the decentralized content network, which currently exclusively hosts Web3Tube.

Anyone with required system and hardware can download Web3Tube today and interact on the decentralized video platform. Web3Tube was also subject to enhancements recently. The network was upgraded with Authorized Access Control (ACC), a measure which strengthens security and simultaneously allows video creators to charge fractional amounts of cryptocurrency for subscribers to be able to access all content uploaded and stored on their unique creator channel. Web3Tube is only the first of many planned DApps for AuroraFS.

Since Web3Tube was always just the beginning for AuroraFS, the contributing team of experts – Gauss Aurora Lab, have been actively seeking out new DApps Developers with talent and ideas to expand the existing AuroraFS decentralized apps. Over the last week word began to surface and the community began buzzing with talks of new DApps being sought for development consideration.

The community was also asked to weigh-in and provide their opinions. Since the AuroraFS community has been largely the responsible parties, directly involved in using and testing the network and Web3Tube to this point, it only makes sense that they would also be asked to take part and give ideas for the next generation of decentralized apps that should exist and run on AuroraFS.

“We are excited to begin the process of developing new decentralized applications for deployment on the AuroraFS peer to peer blockchain network. The involvement from the AuroraFS community has been extremely positive, and we plan to continue to build on it even more as we lead up to the mainnet and AUFS coin launch in Q3.”       –  Tony Lenko, AuroraFS Business Development Manager

The video playback and broadband mining campaigns could be considered successful for the AuroraFS network. The objective was to learn and develop the network real-time, to test its ability to withstand high utilization and continue to still perform. The campaigns which initially began with 3 different activity based Web3Tube contests in addition to non-staking broadband mining, have all progressed into more contests and enhancements to the network.

Flow energy was a term that was birthed and first introduced over the course of these campaigns. In addition, an influx of users caused adjustments to have to be made to contests on more than one occasion. For all intents and purposes, these can be considered positive points for AuroraFS to build upon and develop even more momentum around. As the community gets ready for the full launch of the mainnet and coin launch in Q3, all news and updates can be followed on AuroraFS social media and Telegram channels.