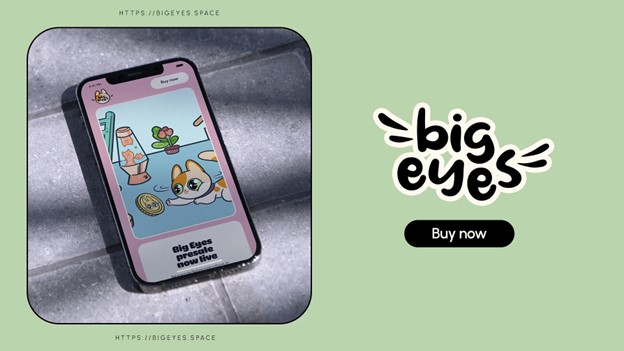 Big Eyes Coin Is Ripping The Charts And Has Raised Close To 10 Million Usd Already — Is It Able To Compete With Ethereum Or Solana?

A couple of years back, only Bitcoin or Ethereum were endorsed as the pioneers of the crypto industry. They, for sure, hold the largest market share, and nobody denies this fact, but the trends largely have shifted as more coins are coming in, with enough potential to rattle the charts.

Out of nowhere, we’ve seen how Dogecoin came in and set a record, and the same was followed for Shiba Inu. As a matter of fact, it’s now less about a certain figure attached to a particular project. It sure grabs the attention and validates the legitimacy of the token, but some can possibly make a huge difference with what they pledge to the community.

One of the evident examples of ruling over the internet these days is Big Eyes Coin (BIG) which certainly has made a name for itself in this short duration.

Inspired by a cat, Big Eyes Coin (BIG) continues the legacy of meme coins and joins the party with its decentralized framework. Big Eyes Coin (BIG) is unique as previously; the market was more familiar with how dog-centric projects owned the markets, but it presented more of a novel idea of holding a cute cat portrait upfront.

Our community is distressed, and there’s much out there to fuss over; this cute-cat token, for the time being, eases things down for its prospects. The association with such an inspiring token liberates you from the worries of tomorrow and makes you live in that very moment and feel the vibe of it. On a psychological level, Big Eyes Coin (BIG) certainly stands out.

Economically, Big Eyes Coin (BIG) is going up the skies even in this domain, and it hasn’t yet been launched but has managed to raise close to 10 million USD. It’s just a matter of weeks since it has taken a long leap from some thousand USD to now 10 million mark. Big Eyes Coin (BIG) encourages healthy competition among its stakeholders for the sake of maintaining the activity.

To keep the audience hooked to the platform, it plans on organizing frequent events and other such programs where the audience will likely be engaged. Not only will it happen to bring more traffic to the network but also keep the community connected and engaged. On top of it, it will support its community to trade NFTs. So, it’s a win-win for anyone on board.

Why Is It the Best Time to Join the BIG gang?

The time is running out, and the presale will likely be over by one month or before that. The early adopters who came in when it just had been released definitely have come a long way, and they would have earned handsome profits, giving in to this 10 million USD activity. You’ve got a chance even now because it’s yet to be launched. Every single second counts because the longer you wait, the narrower your profit will get. Join the party with Big Eyes Coin (BIG)!

Which is better: Ethereum (ETH) or Solana (SOL)?

When it comes to functionality, both coins operate the same way – the concept is to offer a hosting space to the decentralized applications and encourage new developers to deploy their projects onto the chain. Ethereum (ETH) has long been taken as a route that undoubtedly is efficient but certainly lacks pertaining to processing speed.

Hence scalability was an issue. This, too, has been resolved after the recent update – merge. Solana (SOL), on the other hand, is quick and gets the data across pretty fast. The only concern of capitalists is their dictation or deviation from the “decentralized” promise. It selects a team of validators to verify nodes which is why it’s not recommended as some part of it is still centralized.

For more information on Big Eyes Coin (BIG), you can visit the following links: