Bitcoin has been caught within a bout of sideways trading for the past several days and weeks, struggling to garner any notable momentum as its buyers fail to decisively propel it past the heavy resistance that has been established within the lower-$9,000 region.

There are a couple key resistance levels just above BTC’s current price that must be surmounted if bulls want to fuel further upwards momentum in the days ahead.

It remains unclear as to whether or not these levels will be shattered anytime soon, as one analyst explained that Bitcoin may consolidate throughout the rest of the year before beginning its next notable uptrend.

At the time of writing Bitcoin is trading up just under 2% at its current price of $8,890. This is around the level at which it has been consolidating at for the past several days.

The crypto’s latest bout of sideways trading comes after it faced yet another rejection at $9,200. Bears appear to have established this as an incredibly heavy resistance level that could force it lower in the days to come.

If buyers are able to break above this level, the next key resistance that must be firmly surmounted sits at $9,500. Another firm rejection at these local highs could catalyze some serious downside.

One analyst spoke about this current consolidation phase in a recent tweet. He offered a chart showing the importance of these two aforementioned resistance levels, as well as the multiple rejections BTC has seen here. 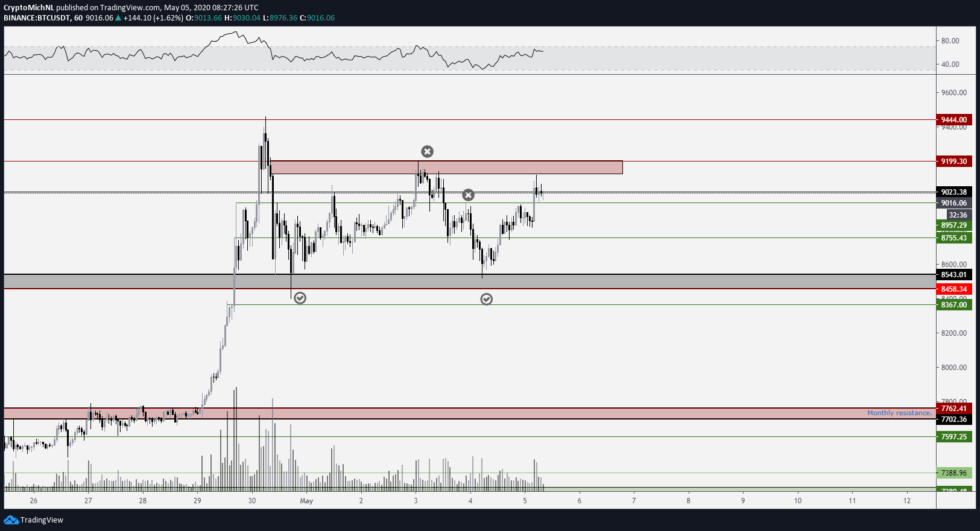 BTC May Consolidate for Months Before Pushing Higher

This ongoing bout of sideways trading may not end anytime soon.

Another popular pseudonymous analyst recently explained that Bitcoin is caught within a pennant on a macro timeframe that has been guiding its price action.

“I don’t think BTC will manage to break the outlined diagonal resistance until end of this year. Happy to be wrong this time.”

Because it is currently pushing up against the diagonal resistance of this pattern, it is unlikely that it will see any significant upwards momentum in the near-term.

The eventual break above this key resistance level, however, may come about in 2021 and spark the next notable bull-favoring price cycle.