Bitcoin has been facing immense turbulence as of late, which has been driven by a combination of technical uncertainty as well as news-driven price movements.

Throughout the past couple of weeks alone, the crypto market has witnessed the major KuCoin exchange hacking, the CFTC’s formal charges against the owners of BitMEX, as well as the latest news regarding President Trump’s health.

One would expect that the confluence of these factors would send BTC’s price nuking lower, but yet it has been able to remain stable within its macro trading range between $10,200 and $11,200.

One analyst is noting that this is a serious sign of strength for the benchmark cryptocurrency.

The selling pressure Bitcoin has been facing as of late is growing increasingly heavy. That being said, bulls have been able to absorb a shocking amount of this sell-side pressure.

At the time of writing, Bitcoin is trading down just under 2% at its current price of $10,480. This marks a decline from its overnight highs of $10,700 that were set as bulls attempted to catalyze a trend reversal.

This latest drop ended as soon as the crypto hit $10,400, signaling that this is a strong support level.

While speaking about the plethora of bearish news that has rocked both the crypto market and the traditional market alike, one analyst noted that Bitcoin’s muted reaction to it is decisively bullish.

“Still in the triangle after: – [KuCoin] hack of +150 million worth of crypto – BitMEX being prosecuted by US – [Donald Trump] testing positive… If this…happened in the span of 10 days 2 years ago bitcoin would of been long dead – kinda impressed,” he said. 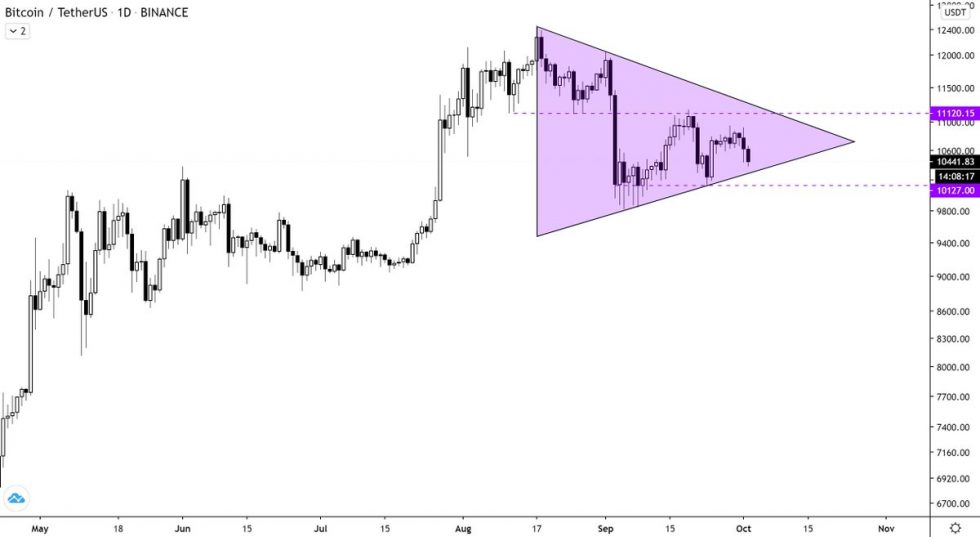 Unless the selling pressure simply becomes too much for Bitcoin to handle, a continued defense of the lower-$10,000 region may even help fuel an uptrend.