Bitcoin Shows Signs of Strength, But These Factors May Bolster Bears

Bitcoin and the aggregated cryptocurrency market has been flashing some signs of strength today, with ETH rallying to fresh 2020 highs in an explosive movement while BTC remains caught below $12,000.

Although the $12,000 resistance is quite strong, some investors speculate that a break above this level could send BTC flying significantly higher.

That being said, there are a few factors that suggest downside is imminent in the near-term, including high funding and euphoria amongst bulls.

At the time of writing, Bitcoin is trading up at its current price of $11,900, which is around the price at which it has been trading at throughout the past several days and weeks.

Analysts are noting that where it trends next will likely depend in part on its reaction to $12,000, which has yet to be tested by the crypto.

One analyst is pointing to several bearish factors that may inhibit its near-term growth.

While speaking about the cryptocurrency’s near-term outlook, one analyst explained that he is watching for a decline down towards its 50-day moving average, which he calls a “magnetic” force.

“BTC – The MA50 on the Bitcoin daily chart is magnetic,” he said while pointing to the below chart. 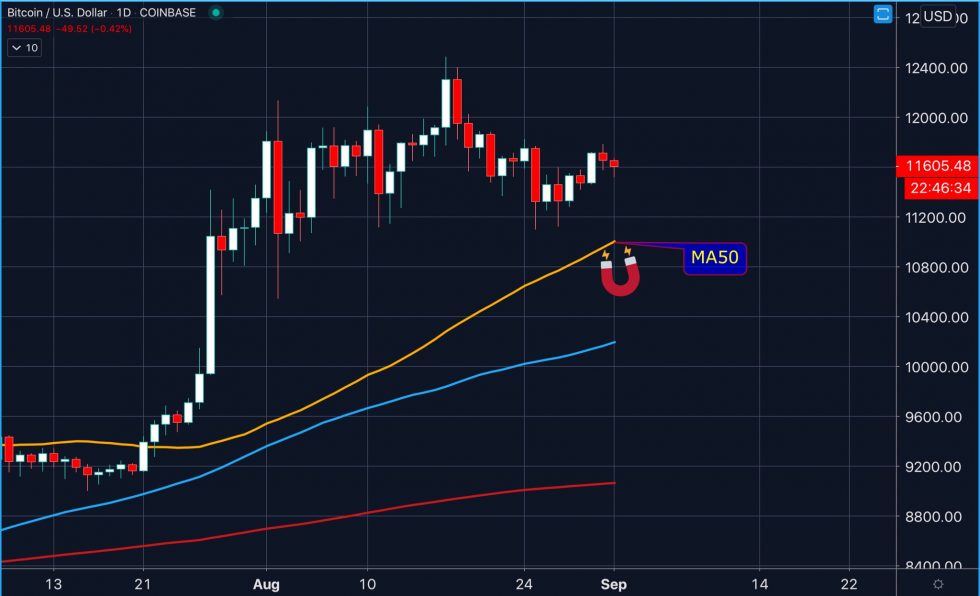 If Bitcoin does see some near-term downside, it will be imperative that bulls defend the $11,000 region, as a break below here could strike a damaging blow to its macro market structure.