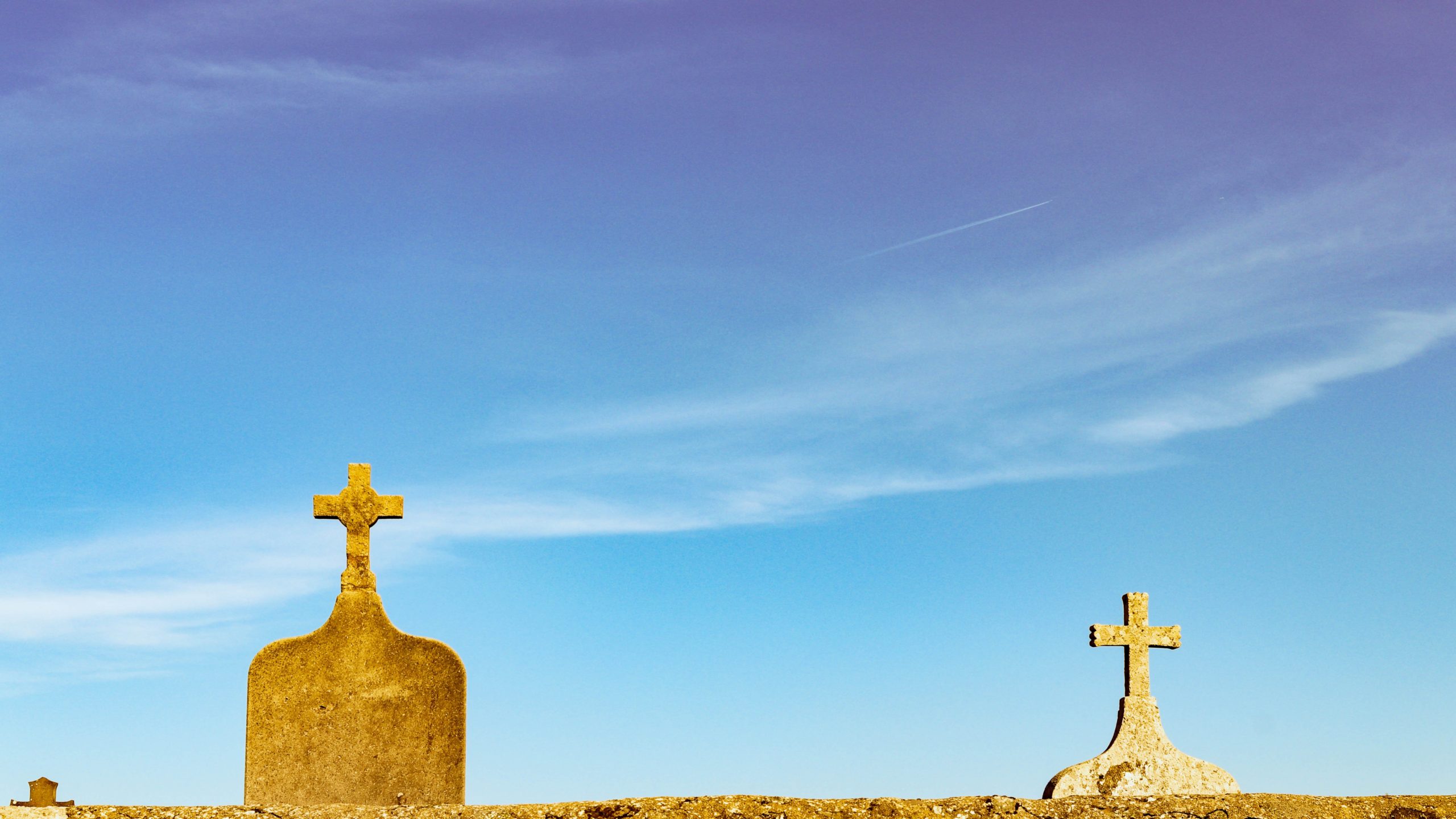 For Bitcoin analysts, $10,500 is a crucial resistance level.

The world’s leading cryptocurrency leaped that mark in early February for the first time since October 26, 2019. But it failed to hold the level for too long as profit-taking, followed by a surprising price crash in March 2020, engulfed the market sentiment. Nonetheless, bitcoin recovered by more than 150 percent, now inching closer to hit the YTD level all over again.

Technical signals are supporting a $10,500-breach. This week, Bitcoin could form two extremely bullish patterns: a Golden Cross on its daily chart, and a similar crossover on its daily MACD, a trend-following momentum indicator. Both indicators have historically influenced bitcoin traders to open new upside positions.

A 50-200 DMA crossover typically behaves as a lagging bullish indicator. The price starts rising long before its formation but signals an extended upside bias after it is confirmed. For instance, bitcoin had surged by circa 73 percent between bottoming out near $3,200 in December 2018 until the Golden Cross formation on April 21, 2019. 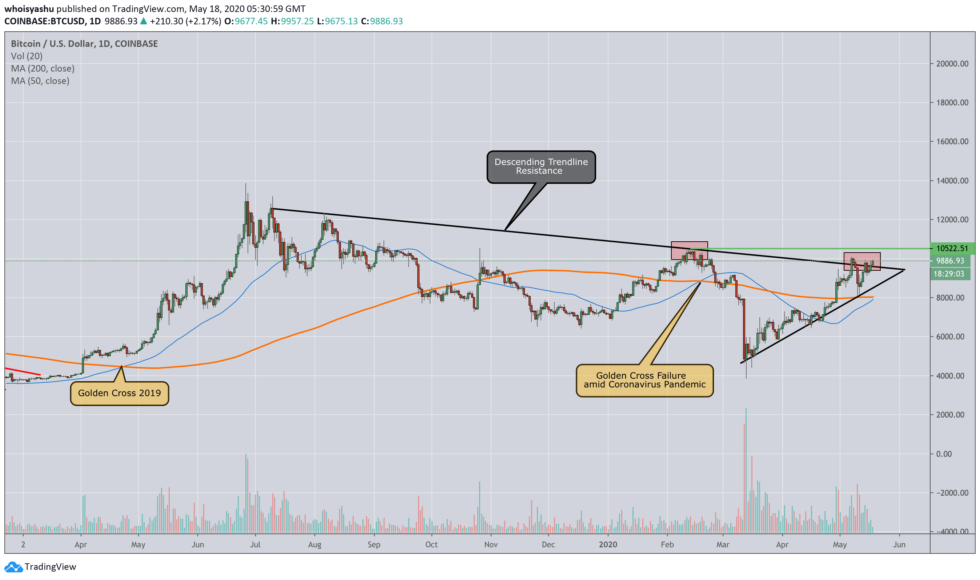 The BTC/USD exchange rate extended its rally by more than 161 percent after the 50-200 DMA crossover, as shown in the chart above. The wild upside move also took cues from a series of positive fundamentals, including the then-escalating US-China trade war, and Facebook’s foray into the cryptocurrency sector with the launch of its digital token Libra.

Fundamentals played a crucial role in Bitcoin’s daily Golden Cross formation in February 2019, as well. The bullish indicator fizzled shortly after its occurrence, as investors panic-sold their bitcoin positions amidst the growing impact of the coronavirus pandemic on global markets.

This week could mark the formation of the third Golden Cross since April 2019. Its occurrence coincides with halving, a pre-programmed event that slashed bitcoin’s daily supply rate by half on May 11 – from 1,800 BTC to 900 BTC. Analysts claim that bitcoin’s newfound scarcity will make it more valuable. 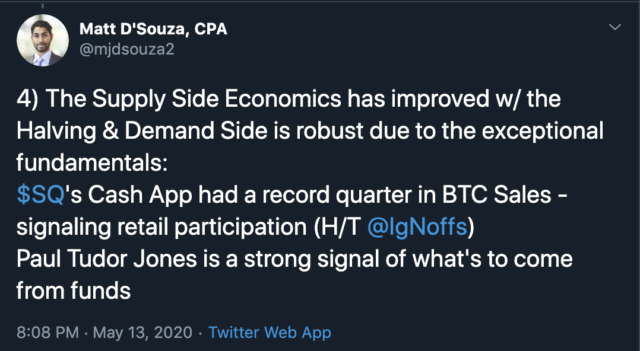 The Golden Cross formation also occurs alongside the Federal Reserve’s open-ended stimulus programs to aid the U.S. economy hit by the coronavirus pandemic. The U.S. central bank and Congress together have injected more than $6 trillion worth of cash liquidity into the system, part of which has entered the bitcoin ecosystem.

The other Golden Cross formation is looking to take place in Bitcoin’s MACD daily chart. 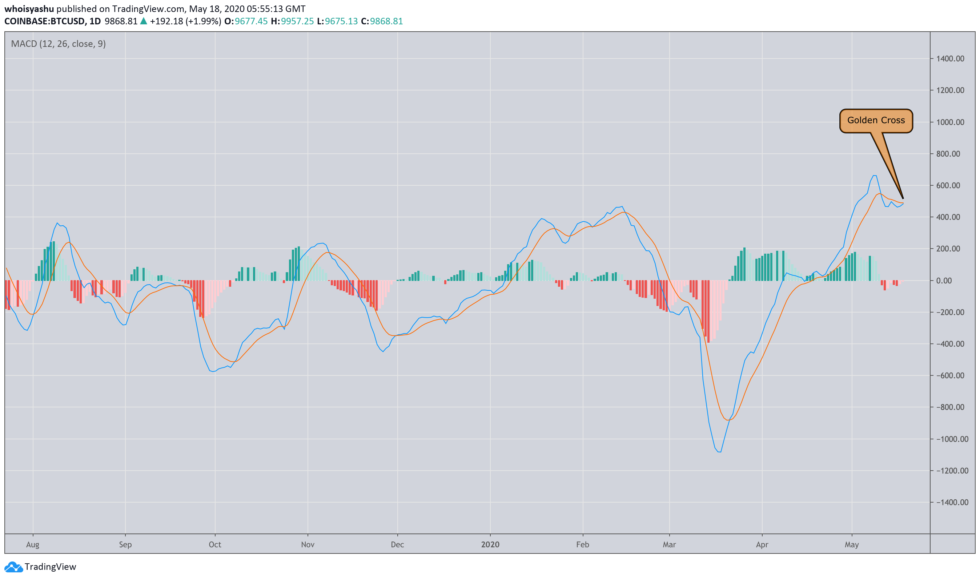 The MACD wave (represented via blue) could cross over its signal line (the oranged plotline) this week, which typically acts as a buying signal. Meanwhile, the crossover is prompting the reddish histogram to flip above the baseline marked by ZERO. It validates a bullish momentum.

MACD works better with the Relative Strength Indicator, another momentum-gauging indicator. Readings on the RSI shows BTCUSD sitting near 63. A downside correction would appear imminent once it hits above 70. That gives bitcoin a seven-point room to grow – at least. 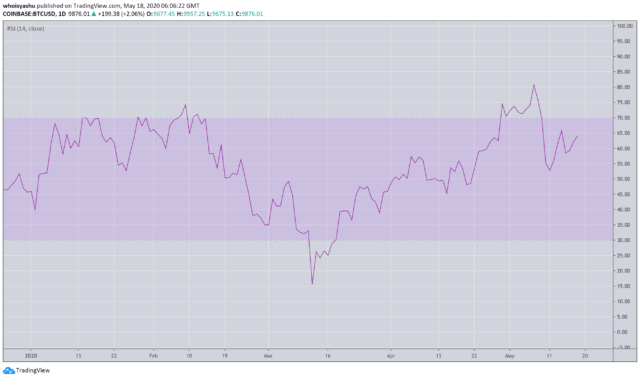 Initially, the price could retest $10,000. It could then follow either a small pullback or an extended breakout session. That would push the RSI above 70 – an overbought, bearish area. But, at the same time, bitcoin’s next pullback target would shift to $10,500.