Bitcoin’s Short-Term Outlook is Dangerous for Bulls; Here’s Why

Bitcoin and the rest of the crypto market have inched higher today, with the benchmark crypto’s climb back above $18,000 slightly boosting bulls.

Where it trends in the mid-term may depend largely, if not entirely, on BTC’s eventual reaction to $19,000. This has been a pivotal level in the past, with breaks above it leading to all-time high tests, and breaks below it sparking selloffs.

One trader expects a sizeable correction before BTC can smash above the heavy resistance it faces around $20,000.

At the time of writing, Bitcoin is trading up just over 2% at its current price of $18,400. This is around the price at which it has been trading throughout the past few days.

The recent drop below this level was grim at the time, but bulls defended its support at $17,600 and have since helped it reclaim its foothold within the $18,000 region.

So long as bulls can continue defending against any intense downside, there’s a strong possibility that the cryptocurrency will continue pushing higher.

One trader recently offered a somewhat grave and pessimistic outlook on Bitcoin’s technical strength, explaining that a move lower is highly probable before it can garner enough buying pressure to set new highs.

“I don’t like the way BTC is looking in the short term if you have a bullish bias. Two rejections at resistance with a sizable bear div and declining momentum. Too many people still expect price to rip through 20K at any moment. Won’t happen before a sizable correction IMO.” 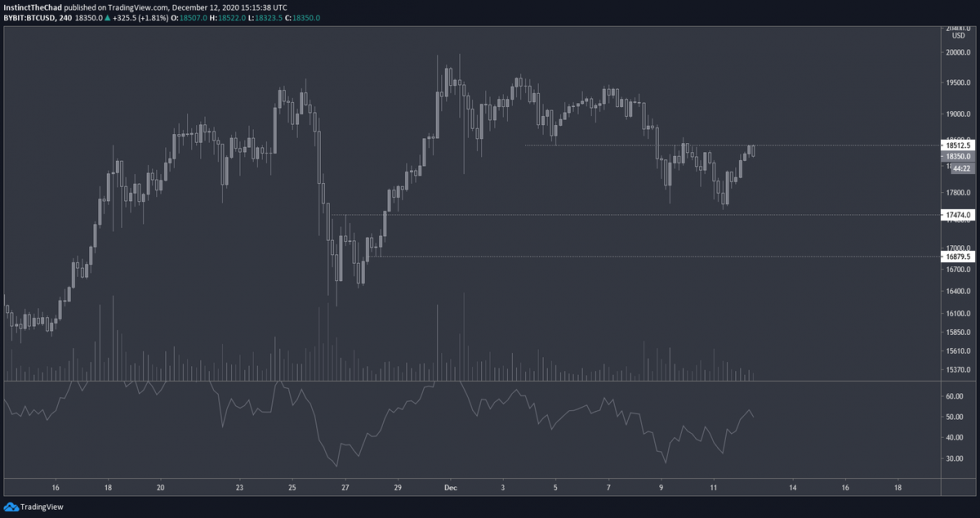 It remains unclear just how low it will have to go to shake out all the bulls who are crowding the upside trade, but there’s a strong possibility that a move like this will happen sooner rather than later.