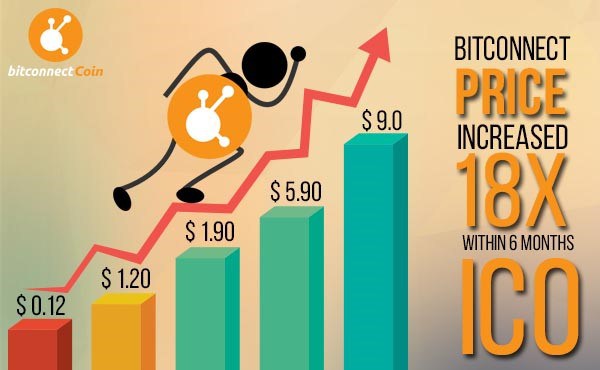 Cryptocurrency newbie BitConnect Coin recently announced an 18x increase in value within six months, following its ICO. Since the altcoin’s crowdsale in November 2016, BCC has risen from $0.5 to $9 per unit. BCC has followed a trajectory similar to that of Bitcoin over Q1 of 2017 which is expected to continue throughout the year.

Similar to Bitcoin and other leading cryptocurrencies such as Ethereum Classic, BCC has a limited supply of 28 million units, making it a deflationary currency. Should the demand continue to increases above current levels, the cryptocurrency’s price could soon test new heights as the year progresses.

The market currently accounts for around 6 million BitConnect Coins and has a strong investor community for a coin of its age. The market for BCC appears healthy in several Asian countries. The BitConnect development team holds an optimistic outlook towards the cryptocurrency, and they expect its popularity to rise in other equally large markets shortly.

BCC presently commands a market capitalization of $82 million, a valuation similar to that of other innovative alternative currencies such as LISK, Ardor, and Iconomi. The drastic increase in BCC’s price and market cap has attracted the attention of more traders in the last few months. The team is also receiving inquiries about the best BCC trading practices from new investors, which indicates the increasing interest among not just seasoned investors but newbies as well.

Based on BCC’s performance during the first two quarters, the months of May and June presents themselves as an optimal time period for Bitcoin investments, mainly because of: an explosive growth of the cryptocurrency market and the short-term downward trend in BCC.

Despite a fall in BCC’s value from April 1 till early May, the cryptocurrency has seen meteoric gains since its inception. A recent price bubble in the cryptocurrency market saw most altcoins drop substantially, including BCC. However, in no time, the price of BCC has already started to bounce back, preparing itself to retest the previous high of $15.