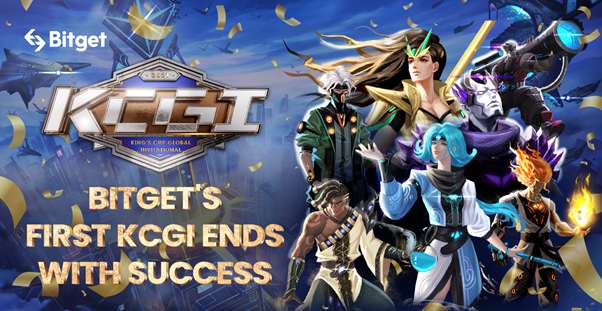 The first KCGI held by the derivatives exchange Bitget has just come to an end. According to its official announcement, a total of 7,467 trading enthusiasts from around the world joined the game to compete for the prize. Among them, 5,351 individuals played in the Individual Competition and 67 teams participated in the Team Battle.

As a result, in terms of Individual Competition, Chrwin from the English Division was crowned as the champion of “Super Heroes” session with a total profit of 467614.2USDT, thanks to his outstanding trading capability and operation skills. Meanwhile, Oneiros outperformed others with an ultra-high PNL% of 2703.97%, becoming the winner of “Super Leaders” session.

“I am very glad to participate in KCGI. Competing with so many excellent peers is so much fun. I really appreciate this great opportunity offered by Bitget. I have attended many competitions before and I should say this one is exceptional. I am very much looking forward to the next year’s KCGI, “ says Chrwin, one of the winners of this year’s Individual Competition.

Held by Bitget, the first sleeve partner of Juventus and the official partner of PGL, KCGI has not only attracted attention from global crypto lovers, but also users from the sports and gaming world, leading to heated discussions on social media. Bitget has also gained huge traffic and exposure.

KCGI, also known as King’s Cup Global Invitational, is an annual event held by Bitget, and is now one of the largest trading competitions in the field of digital asset derivatives. The competition is divided into four divisions in terms of supported languages: Korean, Japanese, English and Russian, covering more than fifty countries and regions around the world.

“As a global exchange, Bitget is glad to provide a platform for the world’s best traders to showcase their abilities. We believe that their talent and enthusiasm will greatly empower the development of digital trading. In the future, we will make KCGI a regular competition, reach out to more users and expand the influence of crypto derivatives trading,” says James Lee, Bitget’s Global Strategy Officer.