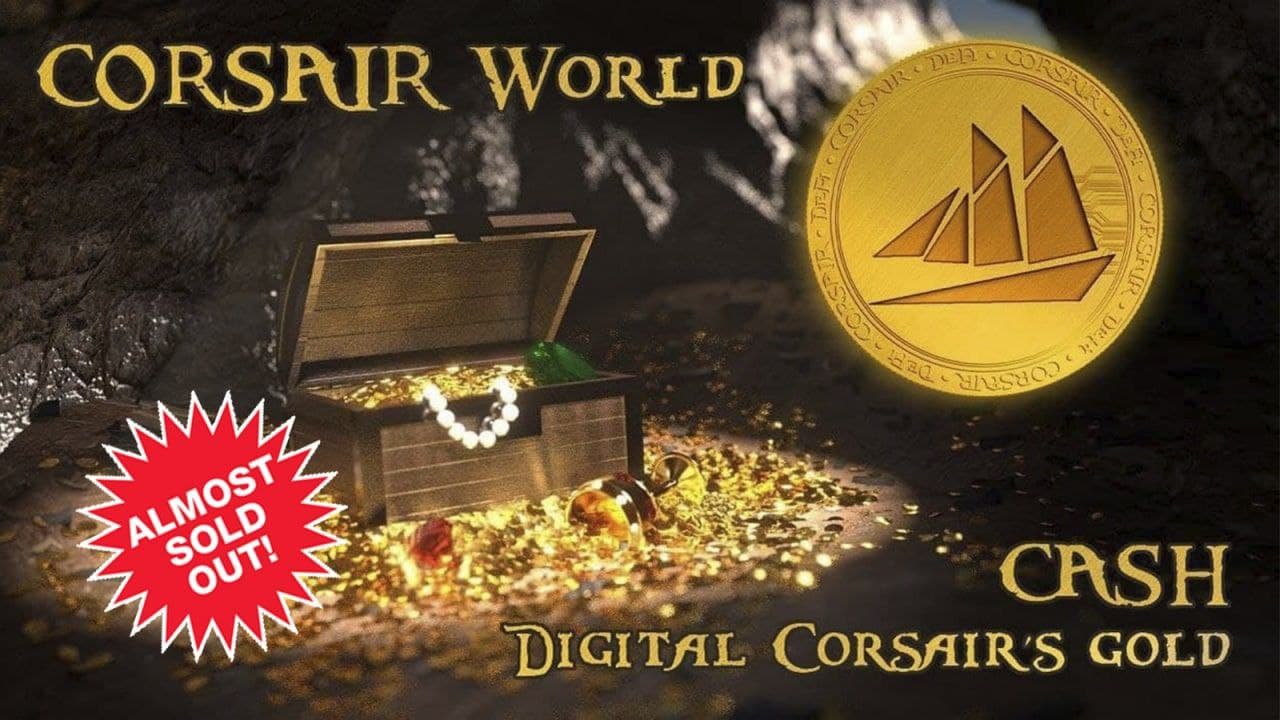 The sensational crypto project Corsair World DeFi is ready to announce the SoldOut pre-trading session of the CASH token. The corsair opens access to those who wish to receive their CASH tokens before the start of open trading. Corsair has extended sales by 7 days to join the team.

The hype surrounding Corsair World DeFi has surpassed all expectations. The project has received a huge number of applications for the purchase of CASH tokens. Even with the $7777 cap, the pre-trading CASH token ran out last week following an interview with Henry Every and the stunning September results announced.

Thousands of people have joined the project and thousands still want to join it. Unfortunately, CASH was not enough for everyone. This is why many of you were unable to purchase a CASH token on the official website last week.

Due to the huge number of applications, the project developers decided to expand the cabins and launch the last persons interested on the ship. This time they announced specific limits – try to be in time before the end of one of two things:

Follow the link to the official website and stock up on CASH tokens. Corsair has added an additional MILLION tokens to the sale.

Why is Corsair the new RockStar in the crypto community?

Corsair World DeFi immediately started with a global idea. With just a few words, this idea can unite millions of people all over the world: “We are tired of the dirty methods of the Whales and we are ready to wash them ashore. We have the tools to deal with them. If you are not Whale, then you are Corsair!”

Corsair for the crypto world is John Lennon for rock and roll, this is Kanye West for hip-hop, this is Tony Stark for cinema. It’s a provocation that has been lacking in the rusted world of numbers and boring analysts.

This project appeared at the end of August 2021 and after a few weeks became one of the most talked about fresh projects of the month. They were able to attract thousands of fans of their idea and made it clear that all members of the community will earn, as is customary in the pirate community. Already at the token sale stage, Corsair opened staking 77% per annum, they are raffle off $7777 among daily purchases, and everyone who bought a CASH token worth $777+ will have access to a closed channel with signals, where they, together with the founders of Corsair, will take away the Whale’s profits. Now their Telegram community has about 60,000 followers, and Twitter has about 40,000 subscribers. And this despite the fact that all the main steps, such as listing on large exchanges, are still ahead of them.

A huge surge of interest in the Corsair World DeFi project came late last month when one of the founders of Henry Every gave an in-depth interview regarding their creation. He stated that he is not going to lie and seem like someone better – Corsair DeFi and CASH token are not intended to change the world for the better. They created this purely for mercantile purposes, to get a lot of money from the Whales, as well as to give money to all those who joined Corsair.

How will Corsair make money?

From the very beginning, you need to say who the Corsairs are. This is a group of crypto traders who, until 2017, managed huge assets on the EuroNext stock exchange themselves. Since then, they have switched to crypto and almost immediately started fighting the big players. Their experience made it possible to track the primitive movements of the Whales, and at the moment when the market manipulators were about to take their profits, the Corsairs were one step ahead of them and took out most of these profits.

For several years they were exclusively engaged in trading. But with the advancement of technology and the advent of DeFi, their plans have grown worldwide. Corsair used its own funds to create and release their own DeFi technology and CASH token. They themselves provide all the marketing activities and rewards for new members. Moreover, after the launch of Corsair World DeFi on the first exchange, they promised to give more than half of the money taken from the Whales to the liquidity pool.

According to Henry Every, the token sale stage remains open in order to protect the project from the influence of the same major players who can harm the project’s economy. Now anyone can purchase a CASH token in the amount of 77 to 7777 USDT – this is also a restriction strategy to keep Whales out of the Corsair World DeFi project. Before entering the first exchange, the CASH token grows in value. Therefore, this is another reason for earning money at the start of the project. Since the official launch of Corsair, the CASH token has risen in price by 800% and it continues to grow. You can buy a CASH token only on the official Corsair World website.

After Corsair entered the first trading exchanges, its price will continue to grow, because hundreds of thousands of new buyers will see the CASH token in the order books. And as we know, the best cryptocurrency advertising is 10,000% growth in the first days of trading.

The Corsair World project roadmap is preparing to launch its own pirate DEX CorsairSwap. Then the pirates will dictate the rules on their territory and hundreds of other projects will trade on their lands. This will fully cover the costs of maintaining the project, and will also become a hyper-catapult for the CASH token. The DEX launch is due next year.

As is customary with pirates, they use everything that is practical and profitable. The Corsair Defi is no exception. Their technical part is built on the most convenient and profitable Binance Smart Chain platform with the BEP20 protocol. As the practice of recent years shows, this technology will be relevant and safe for several more years, and the commissions for transfers within this system will not be equal to the commissions of “crypto olds”, because there are practically none.

The Corsairs pursue their pirate idea everywhere. Even their tokenomics are backed up by the support of Lucky Sevens:

You can buy a CASH token on the official Corsair World website: https://corsair.world/