The growth of the NFT market is a well-known story by now. The craze around NFTs is even more intense than any of its blockchain counterparts as it indicates a convergence of the digital and the physical world. Globally recognized brands are leveraging NFTs to initiate digitally-enabled, experiential campaigns.

The range of initiatives that a consumer can explore is limitless. While people can buy virtual plots through NFTs, they can also build a portfolio with investment exposure to the blockchain gaming industry. Wide-ranging investment opportunities are precisely the reason why the investment bank Jefferies raised its NFT market capitalization forecast to more than US$35 billion in 2022 and more than US$80 billion in 2025.

In this article, we will take a closer look at Cosmic Champs, an emerging player on the Algorand blockchain making its mark in the play-to-earn (P2E) gaming arena by allowing you to battle rare 3D NFTs in real-time. In the Cosmic Champs universe, you can take to the arena to battle friend or foe, compete in tournaments and trade with fellow crews, all while exploring the cosmos. The cosmos is run by its native token $COSG, which you can use for a number of things, including staking, voting on game changes or even claiming rare NFTs.

We will discuss all these aspects of the platform in greater detail in the segments to come. 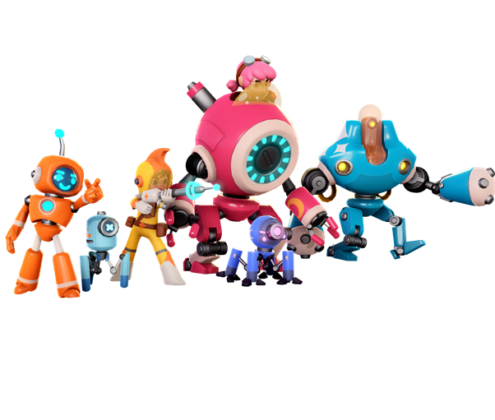 NFT Champs are the characters you enter battle with,  and come in the form of ex-soldiers, smugglers and hotwired robots, among other cosmic misfits.

NFT Ships are a base, a mining operation, and a vehicle all in one, allowing you to traverse the great expanse of the cosmos with your Champs on board.

NFT Planet owners get the privilege of hosting battles on their Planet’s arenas. While battles rage around them, they get to sit back and take their share of the bounty.NFT Treasure is out there to reward tournament winners and users who achieve other in-game accomplishments. All sorts of weird and wonderful items lie scattered around the cosmos.

The $COSG token is scheduled to launch this quarter, with the beta version of the game and the season one NFTs arriving in Q2 2022. Although what you have heard so far may sound exciting in its own right, let us not forget that all this comes with the added benefit of earning while you play.

Cosmic Gold ($COSG) is the governance token for the Cosmic Champs universe and is earned by players of Cosmic Champs. There is a finite amount of $COSG in the cosmos, released on a pre-determined vesting schedule. Earn $COSG by winning battles and completing other tasks within the Cosmic universe. $COSG may be used to: earn staking rewards, enter NFT prize games, build new ships, and participate in the governance of the game.

Cosmic Champs intends to use the power of blockchain technology to enable the creation of open-source, distributed, and transparent gaming servers. The platform is democratic and highly inclusive, meaning the gaming mechanics can only be changed if the majority of the network vote in favour of it.

The general principle of such a token-based P2E model in NFT gaming dictates that the demand for the token is pinned to the success of the game itself. To date, many other P2E games have suffered from poor user retention and that comes down to the simple fact that they are not a lot of fun to play. The earning potential for users depends on the time they invest in the game, and games like Cosmic Champs are aiming to make that time spent worthwhile.

The Cosmic Champs roadmap has been put together to ensure that their growth is sustainable over the long run. 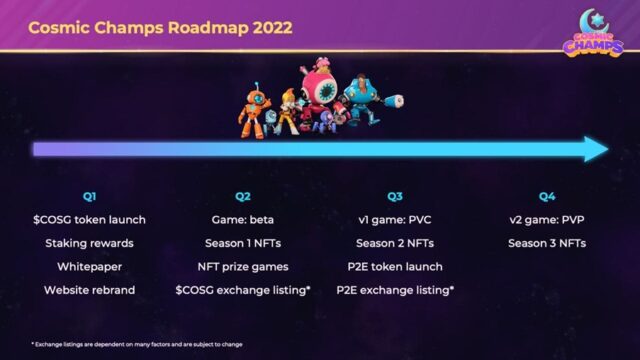 A big year lies ahead for Cosmic Champs

What you can do in Cosmic Champs

You can strategically compile a crew of eight champs to put together a deck that offers you the perfect winning combination.The more concentrated your efforts become on the platform, the faster you will build your crew and the better prepared you will be for battle, especially if tournament play is what you are after. With provisions for upgrades to the cosmetic and statistical traits inherent to your NFTs, you can find ways to overcome your peers in the realm of competitive play.

From here, the cosmos is your limit and the journey can take you anywhere from battle arenas to owning sought-after Ships and Planet NFTs. The more you grow as a player on the platform, the more you inch towards that elusive cult status. You have the chance to become a cosmic legend, the ultimate testament to your mastery of the game.

There’s a popular notion among critics that P2E games are complicated, expensive, boring and have too many barriers to entry, meaning they understandably suffer from poor user retention. Cosmic Champs is founded by multinational gaming studio, Mad Shapes, and the game itself has been developed with the need to combat all these issues in mind. It is this approach and its recognition of what needs to change that makes us think it has all the ingredients to be a winner. It is easily accessible, mobile-first, inexpensive, fast-paced, fun to play, and last but not the least, Cosmic Champs players are rightly rewarded for the time they spend playing the game.

As far as pace is concerned, Cosmic Champs is no different than other fast-paced, action-packed mobile games people play while they are commuting to and from work, or the moment they have free time. The difference here is that on top of this you have added bonuses for Cosmic Champs users, such as P2E and NFT rewards, which makes playing games regularly that much more rewarding.

What the future holds

Saying that the future looks bright in the NFT gaming space is an understatement. Recent growth in the NFTs market has indeed been phenomenal: its value grew from $100 million in 2020 to more than $21 billion in 2021. It is this unprecedented growth that has resulted in bigger brands hopping on the NFT growth bandwagon.

Investors are increasingly looking at NFTs as commodity-like assets, such as silver, gold, or even art pieces. P2E platforms like Cosmic Champs make it layered, adding the additional benefit of earning on the go, while gamers enjoy their passion. It turns an otherwise financially non-rewarding hobby into a rewarding one. That’s where its core strength lies for growth in the future.