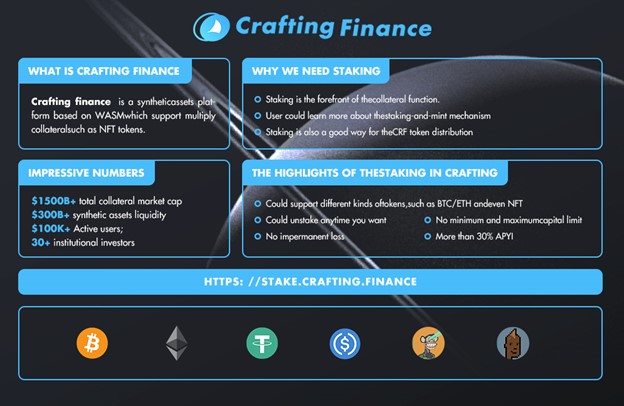 Moreover, we are excited to announce that we add and support NFT fragmentation function. Crafting’s NFT fragmentation will be dedicated to solving NFT liquidity and trading issues, providing a huge impetus for the development of the industry.

As for Crafting Finance, we offer Staking token to get $CRF rewards with no Impermanent loss, we will support some other tokens as well to do staking. However, our program will be deployed on ETH since it’s the second-most popular cryptocurrency provider in the world behind Bitcoin, and is one of the best staking coins available. And we have supported WBTC and ETH for staking as they are the biggest market-cap tokens. We will also support stablecoins such as USDT and USDC and some important tokens. We will also support staking of NFTs Function such as Punk and BAYC. Staking is already available from 13rd Dec, 2021 and rewards will be in the form of CRF tokens.

We will reserve 40% initial tokens for liquidity incentives. Users who stake their CRF as collateral and choose to join the SDP will earn the most rewards. We will launch the main synthetic-assets-protocol in a month, so we want to make a pilot version at the moment, which will not cause any impermanent loss. Users will also stake without collateral with the aim of attracting more synthetic assets. After launching our main protocol, users can transfer or move their stake assets to the main platform as collateral tokens and mint their favorite synthetic assets.

Stay tuned and keep following us for future updates!