by Taylor Scott
in Crypto News
0

What do Steph Curry, Rob Gronkowski, and a UCLA basketball player all have in common? Sure, they’re all on recognizable sports teams. However, they also all hit the newswire for some of their action in crypto this week.

Let’s recap everything from the past week at the intersection of sports and crypto.

Steph Curry Is The Latest Sports Ambassador For FTX

At the end of August, we covered Curry’s journey in securing an NFT from the Bored Ape Yacht Club series. The deal with FTX will include charitable giving to Curry’s foundation. Additionally, it will lock in Curry as an ambassador alongside the likes of NFL athletes Tom Brady and Trevor Lawrence.

Crypto.com has leaned on a lot of traditional sport sponsorship deals. This week, the platform locked in another substantial sponsorship partner. Soccer behemoth Paris Saint-Germain (PSG) came to terms with Crypto.com in a deal that solidifies the exchange as the official cryptocurrency partner.

A substantial portion of the sponsorship fee will be paid in crypto token CRO, as our team reported on earlier this past week. PSG joins a growing list of partners for Crypto.com, which include the likes of the UFC, Formula 1, and Serie A.

PSG has the highest volume fan token in the NFT market, according to CryptoSlam. The club’s signing of soccer star Lionel Messi made headlines as a portion of Messi’s salary is to be paid in the fan token.

This new deal could very likely introduce the club to more crypto-first initiatives.

The deal will include a number of campaigns with the tight end. Gronkowski was one of the first NFL athletes to release his own NFTs on Ethereum, featuring iconic Super Bowl moments.

As crypto exchanges continue to work for an increase in market share, both in the U.S. and beyond, expect increasing amounts of deals with top athletes to hit the newswire. 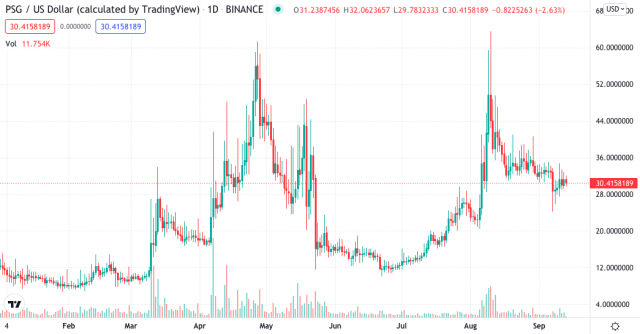 Sorare And La Liga Pair Up

Last month, our team at Bitcoinist reported on Top Shot creators Dapper Labs partnership plans with soccer league LaLiga to build out an NFT marketplace – expected to be similar to what we’ve seen from Top Shot thus far – sometime next year.

This week reports have come to market that LaLiga has paired up with Dapper competitor Sorare in on non-fungible token sports partnership deal. Sorare will launch NFTs of players in the league that fans can play with, trade, and buy.

What this means for the potential deal with Dapper remains to be seen, should it even still be on the table. The transitory nature of NFTs across different centralized marketplaces continues to be a hot topic in NFT communities as the space evolves and grows. LaLiga could prove to be an interesting case study around exactly this.

The UCLA Athlete Who’s Introducing Their Own Token

UCLA basketball reserve Jaylen Clark made headlines this past week, as he announced his intent to be the first collegiate athlete to have his own cryptocurrency token. Clark made the announcement on his YouTube page.

The basketball athlete has over 20,000 YouTube subscribers and over 50,000 Instagram followers that will be exposed to Clark’s $JROCK token. Clark has already monetized his YouTube account as he joins a growing list of collegiate athletes that look to take advantage of emerging name, image, and likeness (NIL) legislation that is coming to market.

Shaq Says: “I Don’t Understand It”

Sure, each week here at Bitcoinist we cover a lot of new partnerships and sponsorship deals that happen across crypto and sports. It’s not often that sports stars show some cautious optimism. NBA legend Shaquille O’Neal was asked on CNBC Make It why he hadn’t yet invested in crypto.

“I don’t understand it,” O’Neal said. “So I will probably stay away from it until I get a full understanding of what it is.”

Respect to Shaq for keeping it honest during a time where sports partnerships with exchanges and platforms are on fire.