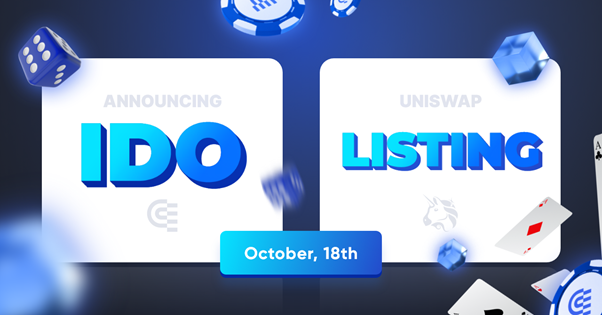 by Bitcoinist
in Press releases
42

The rise of blockchain gaming is nigh. Blockchain’s trustless, secure, non-custodial, and provably fair mechanisms make it a perfect instrument to create new, better experiences for players and punters in the eGaming space. CryptoPunt’s dual-launch IDO on Polkabridge and Uniswap will herald the beginning of a new leading blockchain eGaming platform, one prepared to kickstart the industry’s obvious potential and to grow as blockchain gaming becomes the only way to play.

CryptoPunt is a purpose-built casino and eGaming platform, with plans to be a home for all types of blockchain games, including Play to Earn, as they build partnerships. CryptoPunt’s focus has been on the creation of a smooth, sleek interface that gives even new crypto users a simple, engaging experience. Famous crypto players have already expressed support and admiration for what the team has created.

A common critique on current eGaming platforms is the fact that the centralised authority running the games has total control over both the game and the player’s funds. To play, a player must cede control of their assets in exchange for the house’s tokens, with the implicit promise the house will redeem them. Sadly, the house does not always play fair, and there are plenty of stories of lucky winners being able to gather their spoils due to some injunction laid down by the controlling authority on a spurious case.

CryptoPunt’s decentralized, non-custodial management of player funds means punters can play straight from their wallets – and receive their winnings as soon as the game is complete. No KYC is required, and sign up takes less than a minute. The provably fair, auditable smart contracts that run the games means the player always knows the odds, odds which can be made substantially more in their favour due to reduced operational costs of running a blockchain gaming casino. Investors are pouring into blockchain gaming as a result of this huge opportunity.

CryptoPunt aims to give punters a fast, fun and fair way to enjoy all their favorite games. Holders of the $PUN token, whose PolkaBridge IDO is on the 18th, can be amongst the first to play the initial games, and earn money through referrals by taking a further rake from the bets of the people that they introduce to the ecosystem. CryptoPunt will be doing a dual-launch IDO, with the token appearing on Uniswap on the 18th alongside the main IDO.

CryptoPunt’s upcoming dual-launch IDO on Polkabridge will be a fantastic opportunity for fans of casino games, blockchain gamers, and those who are looking for a serious investment prospect. Blockchain gaming is the future, and CryptoPunt’s launch is the start of