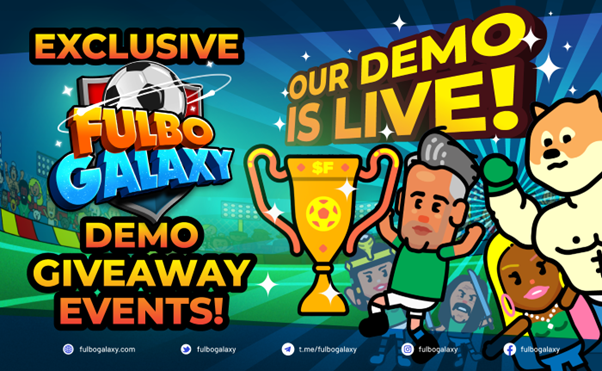 Fulbo Galaxy has officially released its highly anticipated alpha. The demo will offer a host of special in-game rewards as part of the team’s efforts to onboard early adopters and learn from the community’s feedback in preparation for the launch of the official game.

Fulbo Galaxy is aimed at the millions of football fanatics around the globe who are looking for a casual gaming experience and maybe looking to make a few bucks while they’re at it. This P2E stands out for its dynamic, exciting, challenging and most of all fun gameplay, making it the first game to be truly fun-to-play-and-earn. With a distinct punk theme and famous faces introduced under the guise of satire, Fulbo Galaxy utilizes the lightning-fast Solana blockchain and its native $FULBO token.

The demo version is rife with giveaway events and challenges for alpha testers. These events offer a mix of skill-based and commitment-based rewards, like Coin Hunt Monday and Celebrity Search Wednesday, with 10 lucky winners receiving prizes of up to $50 BUSD. Coupled with the demo giveaways is the Fulbo Galaxy Gleam Campaign, that offers gamers a chance of winning $1000 USDT by following the Fulbo Galaxy team on their socials, sharing a screenshot of winning a match, and tagging 3 friends on Twitter.

“The team has been working around the clock to make this alpha release a reality, and we are overjoyed to see the first players enjoying our game. We’ll use backend learnings and community feedback to finalize the launch of the official PvE game in Q3, after which all attention will be focused on introducing PvP gameplay.” – Kevin van Dorp, CMO of Fulbo Galaxy, said.

The Fulbo Galaxy team has a wealth of experience in gaming, having a hand in creating some top video games for some of the most well-known studios around the world. Fulbo Galaxy is still in its seed round. IDO and listings announcements will follow soon.

About Fulbo Galaxy
Fulbo Galaxy is a dynamic, exciting, challenging and most of all fun football game that leverages blockchain technology to create a unique entertaining gaming experience. Players compete against the AI (PvE), or in PvP mode and tournaments, and battle it out for awesome prizes.