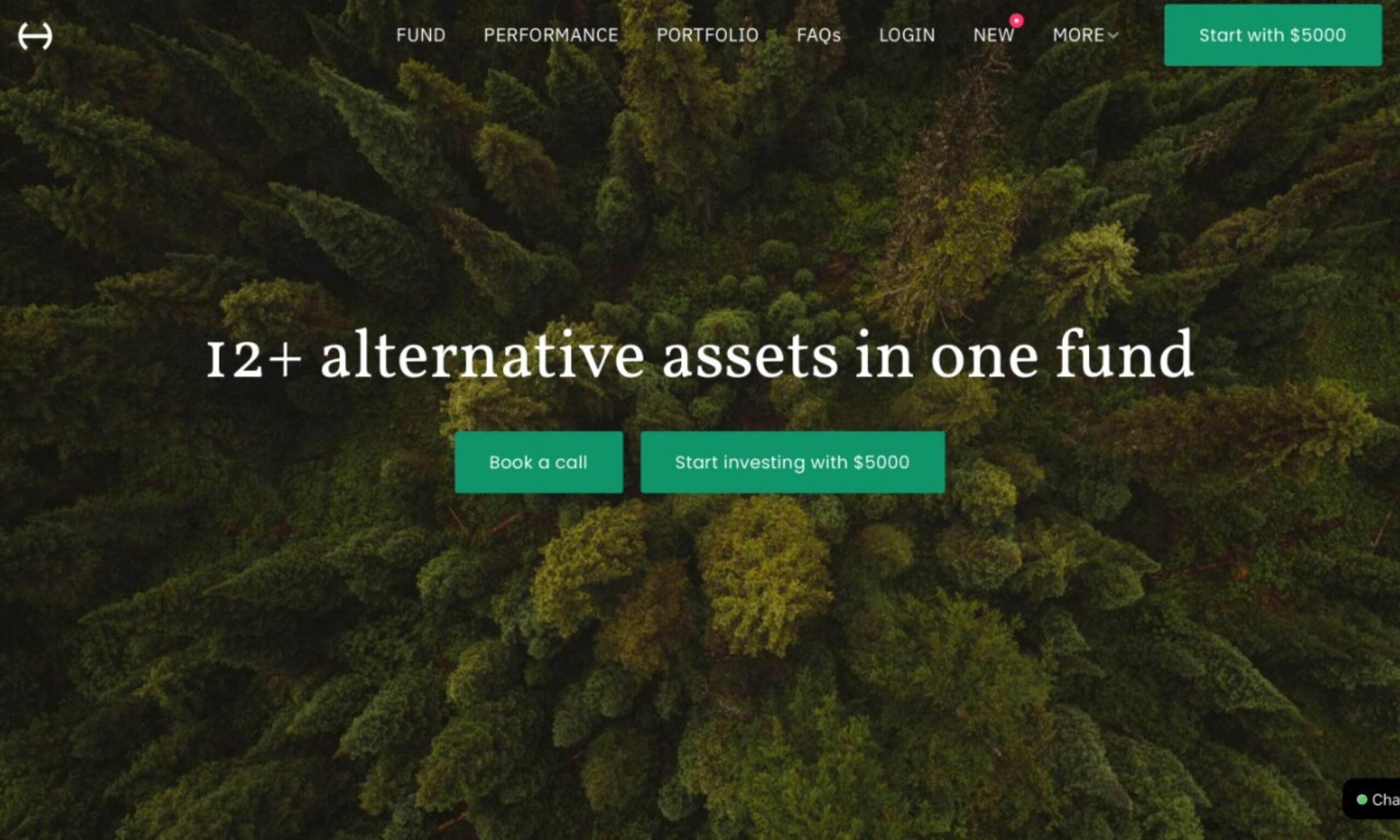 In this article, we look at seven quantitative frameworks to value bitcoin. 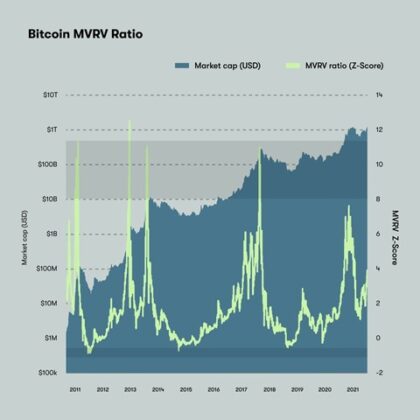 First conceptualized by Murad Mahmudov and David Puell in 2018.

Historically, bitcoin has topped out when the MVRV ratio has surpassed 10, as shown below. Recently, on a volatility-adjusted basis, MVRV ratio hit 8, at which point the price of bitcoin dropped 53%, perhaps suggesting a local as opposed to a global top. After May’s 53% correction, MVRV on a volatility-adjusted basis went from roughly 8 to below 2. Now at 4, the MVRV ratio is in a range typically associated with neutral territory. 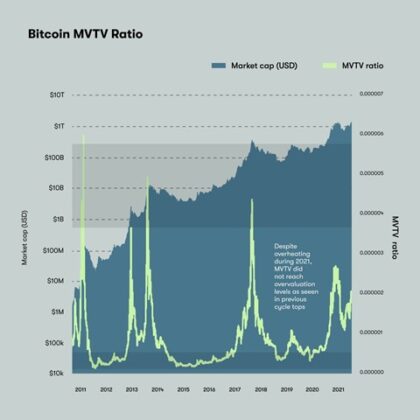 First conceptualized by Glassnode in 2019.

Like MVRV, the MVTV ratio suggested last April that, at $63,000, bitcoin was in a strong bull trend but that the market was not near a speculative blowoff, as shown below. The price of bitcoin has since recovered from its 50% drawdown, with MVTV also nearing its previous local high. 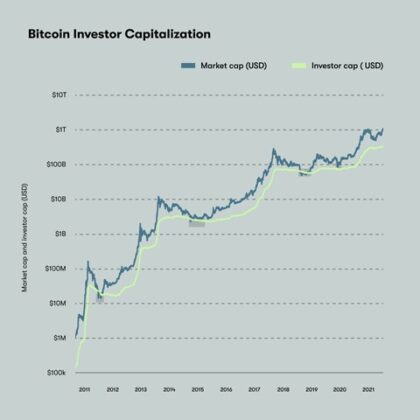 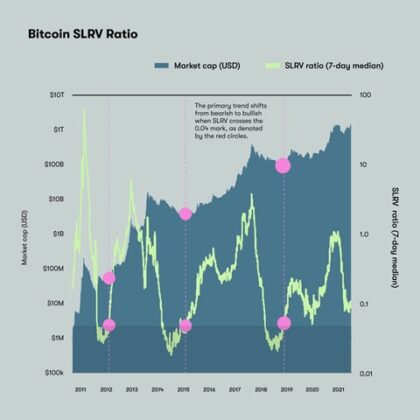 The SLRV ratio is the one-day HODL wave divided by the six-month-to-one-year HODL wave, both weighted by realized capitalization. This metric compares the number of bitcoins moved per day to the number moved six months to one year previously: in other words, short-term velocity relative to medium- and long-term velocity. This ratio illustrates how complex calculations can detect price inefficiencies. Historically, a ratio below 0.04 has been associated with bear markets when short-term velocity is low, suggesting apathy, relative to medium- and long-term velocity.

When the ratio moves above 0.04, a new bull move tends to be underway, as shown below. 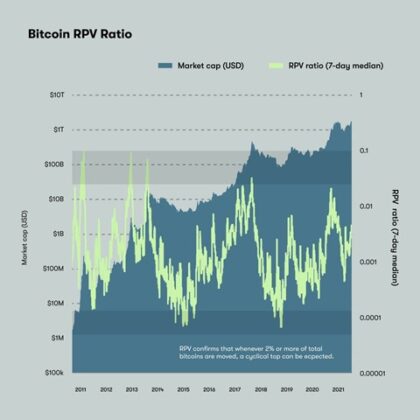 The RPV ratio is realized on-chain profits in USD divided by realized capitalization, measuring the difference between daily profit-taking behavior and buyers’ average cost basis. A ratio of 1 – which never has occurred – would indicate that every bitcoin is moving on that particular day. Historically, when profit-takers have moved 2% or more of their holdings in one day, the market has hit a cyclical top. Conversely, when they have moved only 0.001% of their coins in one day, the market has been in the process of bottoming.

After reaching levels of exuberance slightly below 2 earlier this year, followed by the 53% drop in the bitcoin price, the RPV ratio has reset to much healthier levels, as shown below. 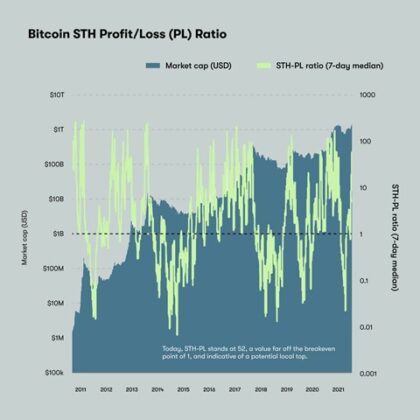 Another measure of price inefficiencies is the Short Term Holder (STH) Profit/Loss (P/L) ratio, which is the short-term supply of bitcoin at a profit divided by the short-term supply at a loss. A ratio of 1 typically is associated with local bottoms in bull markets and local tops in bear markets. When the ratio is below 1, in the aggregate market participants who have moved coins in the last 155 days have losses. Conversely, when the ratio is above 1, short-term participants have an aggregate gain. When selling off around a ratio of 1, bitcoin typically has entered a bear market.

After bitcoin’s 53% correction from $63,000 USD to roughly $30,000 this past spring, its STH P/L ratio stabilized around 1, as shown below, suggesting that it was bottoming out. Today, STH P/L stands at 52, a value indicative of a potential local top. 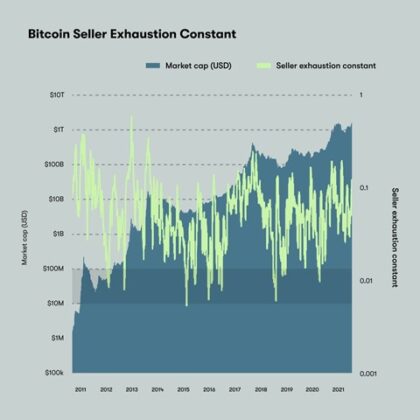 Lastly, combined with profit metrics, volatility can be an important guide to bitcoin’s future price action. The seller exhaustion constant shown below is the percentage of bitcoin total circulating supply in profit multiplied by its volatility over the last 30 days. This metric measures whether the two factors align. Specifically, the combination of low volatility and high losses is associated with capitulation, complacency, and a bottoming out of the bitcoin price.