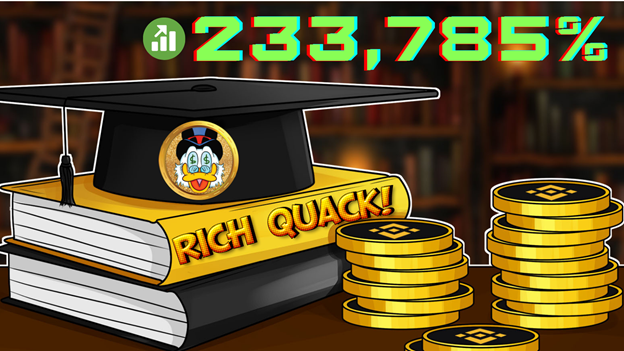 RichQUACK.com now sits in rank 336 of all Cryptocurrency with a market cap of $204 million. The surge has become a self-fulfilling prophecy with first-time investors willing the token toward success. The surge may well have given us one of the greatest trade ever.‍

The RichQUACK Community could have indirectly assisted in $QUACK massive rally by rapidly expanding their community day by day. RichQUACK is seen as one of the strongest communities that is rapidly growing and has the best engagement or social activity on telegram, twitter, and discord.

This becoming rich story does not just happen to 1 individual, but many individuals in the RichQUACK community. These Individuals are now taking to social media with their newly found wealth through $QUACK. Many investors see this trend as an unsustainable hype, but proven wrong many times until now. $QUACK is listed on Gate.io, Hotbit, Digifinex, ZT Exchange, XT Exchange and is rumored to be considered for listing on Bitmart Nov 24 after an update of their roadmap on their website.

The Beginning of The Duck Era?

The recent surge of dog meme coins has had an impact on the crypto industry. The previous surge in Dogecoin and Shiba Inu signaled a local top before the crypto market tanked. It was largely fueled by retail investors seeking to make quick gains. Meme coins became an attractive choice because it is fun, light-hearted, and appeals to the young crowd.

Unlike other dog meme tokens, The Duck, Richquack’s value proposition comes from a slightly different perspective. In its whitepaper, it centers its core propositions on working hard as a community. 1 for all, all for 1. and ofcourse the project is 100% community-based. ‍

Created in June 2021, RichQUACK is founded by a pseudonymous team aka “The QuackFellas”  that previously worked together on Multiple Business Ventures and they worked with a blockchain development team that has more than 60 developers. The effort to unmask the identity of the founder is not important. What is important is the goals that QUACK is trying to achieve, to help as many people as they can to reach success by providing a safe launchpad and community where people can hold, earn and make investments in a safe environment. Projects launched on the launchpad are chosen carefully.

Not Just a Meme Coin

There is utility, value, and vision that sets RichQUACK apart from other Token. It may not be a coincidence that $QUACK has overtaken $DOGE in terms of subscribers on CoinMarketCap, the best website for cryptocurrency charts and analytics.

However, there will be stories of fairy-tale runs in this rally and $QUACK is one of them. 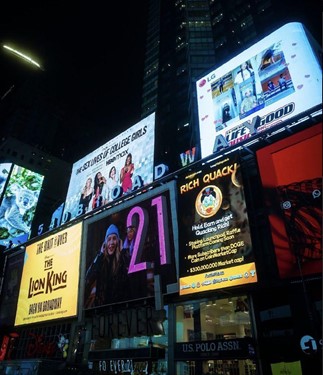 RichQUACK Billboard in TimeSquare, New York. They are planning to attack cities around the world using #QUACKATTACK Campaign.

The label of a meme coin may not be a fitting label judging from the aspiration of the community-owned project. However, proper risk assessment on an asset that has pumped close to 1,000,000% in the last 6 months ought to be a serious point to consider before investing into $QUACK.  Their vision of helping people to become successful is actually already happening in the present moment. Let’s see what will happen in another 6 months! Writer is Bullish on this one.