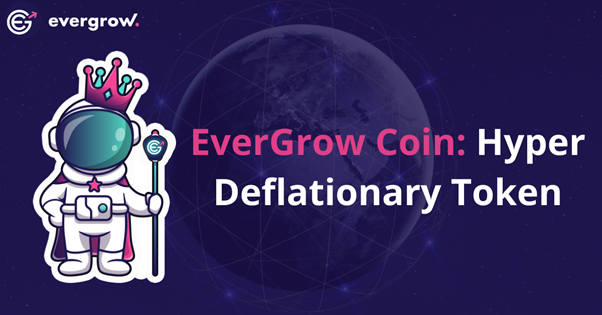 During Sunday’s conference call, the EverGrow Coin team released information about how their listings on upcoming centralized exchanges would work in terms of tokenomics. In EverGrow’s case, part of the appeal that has led them, inside the first 6 weeks since launch, to break all previous crypto records, is their unique rewards system. Many cryptos now offer rewards for holders, but EverGrow was the first mainstream project to offer stable, Binance pegged US dollar rewards, and in a short period of time EverGrow Coin holders have already received over $20 million worth of rewards.

The distribution of rewards on centralized exchanges like Binance and Bitmart is a real hurdle because these exchanges simply do not have the infrastructure in place to support this kind of tokenomics. EverGrow has been working on this problem with a number of exchanges over the last few weeks, and it seems their solution has perplexed investors, but may well be the ultimate economic masterclass.

EverGrow confirmed that those investing on centralized exchanges would be able to buy and sell EverGrow tax-free, but in turn, would not participate in rewards. If these ‘traders’ wanted to then turn into ‘investors’, they could transfer some or all of their tokens into an eligible wallet. The initial reaction to this news was a combination of confusion and some knee-jerk selling, which led to a sharp fall in the EverGrow Coin price.

But now investors have had a little time to consider the full implications of this move, many are saying this could be one of EverGrow’s best ever moves.

There are a number of layers that need to be unraveled to truly understand the advantages of this approach. Firstly, centralized exchanges have 10s of millions of users who traditionally only trade on the exchange, and this means in 99% of cases, they are not used to the idea of paying taxes to buy or sell a coin. In fact, even though coins with taxes and rewards are now the fastest-growing part of the cryptoverse, the majority of the world’s estimated 50 million crypto traders do so on centralized exchanges via projects offering no taxes and no rewards.

So EverGrow’s approach was to capture an enormous market that thus far similar projects have been unable to capture. To allow those more traditional users access to EverGrow, the “no tax, no rewards” approach is likely the most logical. As cryptos cannot essentially be shorted, i.e. you cannot bet on the price to fall, more traders and investors would logically lead to an increase in market cap, as demand on the token is expected to skyrocket once these listings go live. It seems that what is by many considered a compromised solution, is likely the very best possible solution for all investors when considering the bigger picture.

Essentially those buying via exchange will see a higher price relative to the fact no tax is being paid, and if they simply want to hold on to the exchange, the sale price will also be relatively higher. Simply put, this will attract those investors, who are still in the vast majority of crypto investors worldwide, who do not participate in tax/rewards projects. This in itself opens up EverGrow to a vast number of investors and will create unprecedented new demand for the token.

If those buyers move to a wallet to receive rewards, the resale value of their coins will drop relative to taxes once inside that wallet. Whilst in that wallet they will participate in rewards. If they then sell or swap from that wallet, they will be taxed as normal, contributing to everyone’s rewards. If they transfer back to the exchange, they essentially get double taxed by the contract, leading to double rewards for all, but can sell at the relatively higher value on the exchange. Although this arrangement sounds incredibly complex and is likely leaving many readers still scratching their heads, the net result is absolute equality across the board and relative full taxation for all those receiving rewards. Sam Kelly, Chairman of EverGrow commented:

“We fully understand that people can become very uncomfortable when they don’t fully grasp a concept. I’m not exaggerating when I say this solution took nearly 3 weeks, and hours of work and testing. In a world where new projects are plagued by doubters and FUD, an impatient investor’s inability to grasp a concept can lead to a panic sell, and this can quickly snowball. We have no concerns in the longer term. We believe this solution is far better than the solution investors were expecting, because it opens up EverGrow to the entire 50 million strong crypto investing world, an opportunity that similar projects have simply not understood. Once these exchanges go live the benefits will become immediately apparent, even if the complex process behind it isn’t necessarily understood by all.”

The final announcement from the EverGrow team was that their new Content Subscription Platform, Crator, will generate revenue that will be used to Buy and Burn EverGrow Coin. What this means in simple terms is that when Crator generates revenue, rather than lining the pockets of the team behind EverGrow Coin, that revenue will be used to buy EverGrow Coins. This in itself will create upwards price action and more rewards for those in rewards eligible wallets, further increasing the attractiveness of that option. This in turn encourages centralized exchange investors to pay their taxes, generate more rewards and move to that option.

Finally, the tokens bought with the Crator revenue are Burned, which means they are removed permanently from circulation. This means even less tokens receiving rewards, so yet more rewards for holders. As we unravel each layer of this arrangement it becomes more and more clear why the EverGrow team chose this approach.

It’s no wonder the implications of this move weren’t immediately understood by many EverGrow investors, but it is becoming increasingly evident why many are now citing EverGrow as becoming a top 20 global crypto. There are almost no examples in the cryptoverse of this level of critical thinking, and it is clear we are seeing a project in EverGrow that is truly raising the bar.