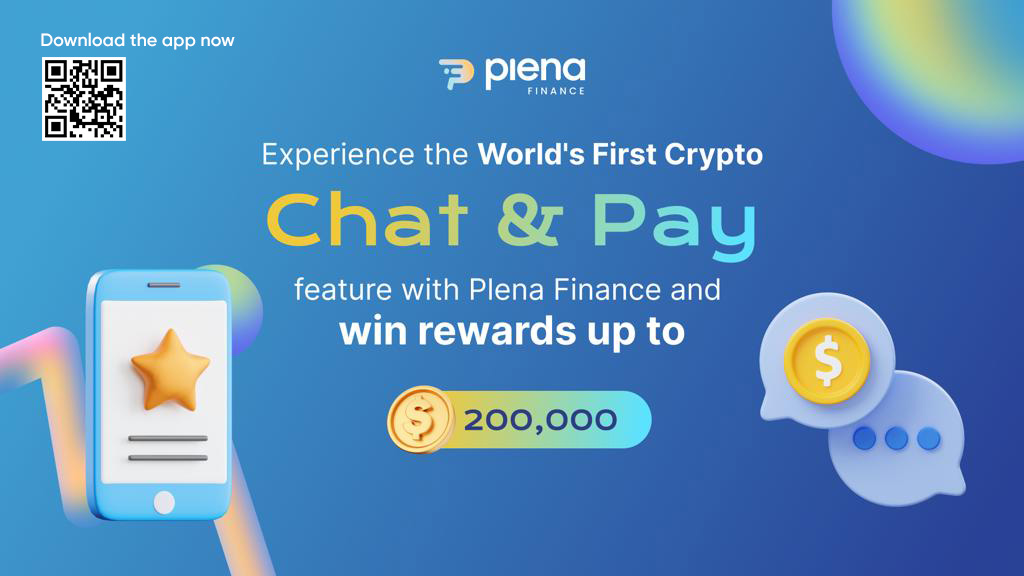 Plena wallet celebrates the launch of its awaited Crypto Chat and pay feature with a $200,000 rewards campaign

While Decentralized wallet users have long been complaining about the wallets’ limitations and functionalities, Plena Finance is flipping such complaints on their heads by consistently adding new features to its robust web3 wallet.

The Multichain Non-Custodial Plena wallet was already one of the most efficient web3 wallets in the space. Yet here comes another unique and highly-secure Chat and Pay attribute that no other web3 wallet features.

Why Chat and Pay is a significant milestone?

The addition of the Chat and Pay feature to Plena’s wallet makes it the only one and standalone Decentralized competitor to traditional payment applications in terms of the features included.

With its new Chat feature, the web3 wallet now empowers users to securely send messages to peers on-chain with high levels of encryption as opposed to traditional platforms. Additionally, the chat feature also enables users to make payments directly from the chat window to their friends, family, and clients in seconds!

To take advantage of the Chat and Pay feature, users first need to set up a username on Plena Finance(PNS)– which hardly takes 5 seconds. Once PNS is set, users can seamlessly start chatting and even send and receive requests.

To celebrate the launch of its unprecedented chat and pay feature, Plena has also announced a $200,000 giveaway in $Plena tokens. To take advantage of it, users simply need to invite their friends and family members using the personalized link generated via the app. Once their friends and family are on it, they must chat and transfer funds to each other to win $Plena tokens in real time.

The campaign is now live for a limited period.

Benefits of the Chat and Pay feature

Plena Finance was launched in 2021 as a highly advanced and interoperable web3 wallet to tackle the inefficiencies that curtailed growth in the crypto space. But unlike most web3 wallets that remain lost in the sea of minimalistic features, Plena brought a tsunami of unprecedented features with it.

This helped Plena to attract various investments and deliver on its mission to bring crypto to the masses. As a result, the Plena wallet today encompasses everything that any web3 User would want. From Defi lending to NFT holding from chat support to social trading, it has everything under the same umbrella– making Defi seamless.