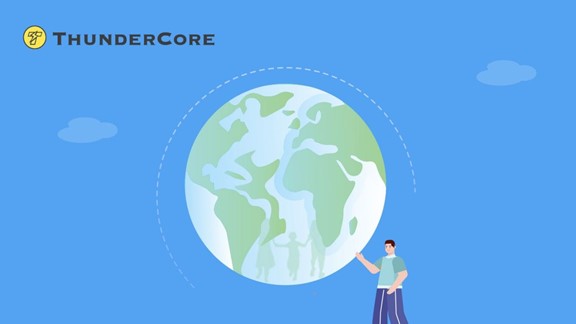 Carbon dioxide emissions from on-chain transactions are cut by more than 10,000x on ThunderCore’s network.

At a time when decentralized applications are being adopted all over the world and scrutinized for their carbon footprint and energy usage, ThunderCore is building eco-friendly foundations for projects that utilize blockchain technology.

It also supports the chain’s full ecosystem with cheap renewable energy, reducing carbon dioxide emissions from on-chain transactions by more than 10,000x. That means block creation on ThunderCore does not demand large amounts of energy compared to Bitcoin or Ethereum blockchains.

Despite criticism of the energy required for the continued operation of blockchain projects, research by ARK Investment Management suggests that the Bitcoin network — a frequent target of critique due to its proof-of-work mining processes — has a lower energy footprint than the gold mining industry and the conventional banking system. Plus, many projects now utilize more efficient proof-of-stake consensus protocols, like ThunderCore’s PaLa, which is a signal that the ecosystem is moving to greener solutions.

To take a step further and broaden the appeal of ThunderCore for developers in the blockchain space, the team behind ThunderCore has made it Ethereum Virtual Machine-compatible, which allows for the rapid migration and deployment of Ethereum projects. This not only instantly reduces the energy usage of blockchain projects but also ensures that their long-term carbon footprint remains low.

Moreover, ThunderCore offers low gas fees — under US$0.00001 per transaction — sub-second confirmations, and 4,000+ transactions per second. These traits, alongside ThunderCore’s capability to accommodate dApps, make the network an appealing alternative to Ethereum. It is also a prime choice for developers who are building new projects with long-term ecological sustainability in mind.

“Ever since ThunderCore was established in early 2018, our team has consistently developed a network that improves upon the scalability issue on Ethereum, while acknowledging and minimizing our carbon footprint. We have continued to upgrade our network to establish interoperability and build a robust network that is eco-conscious with every new step we take. Plus, as part of Taipei’s smart city development, its Department of Information Technology has deployed a ThunderCore node to empower transparency and security in public services. We take this as a valuable endorsement in the quality of ThunderCore,” said Chris Wang, CEO and co-founder of ThunderCore.

The user base of ThunderCore includes at least 4.8 million addresses in more than 18 countries. Already, the network has processed 259 million transactions. Projects that were built on the ThunderCore chain include TTGuess, a hyper-interactive gambling and lottery dApp; Acorn Finance, a decentralized exchange inspired by Curve Finance and Belt.fi that aims to deliver minimal slippage and low-fee trades with optimized earning strategies; and Ram Protocol, a non-custodial liquidity protocol for borrowing assets and earning interest on deposits.

ThunderCore’s pledge to utilize renewable energy sources makes it a trailblazer among climate-conscious, energy-efficient blockchain ecosystems. At the moment, cryptocurrencies, non-fungible tokens, and other decentralized offerings are being adopted at scale all around the world, including by nation-states. The considerable reduction in electricity usage and carbon emissions on ThunderCore is clear proof that the network offers a sustainable future for every type of project that will be built by the creative and innovative blockchain community.

ThunderCore is a secure, high-performance, EVM-compatible public blockchain with its own native currency, Thunder Token. The company was founded in 2017 in Sunnyvale, California by Chris Wang and top researchers and engineers in the field. With a breakthrough consensus protocol called PaLa that overcomes the scalability “trilemma,” the ThunderCore network offers more than 4,000 TPS, sub-second confirmation times and low gas fees that cost less than a fraction of a dollar, giving dApps security and scalability.

ThunderCore also prioritizes interoperability as native assets on other blockchains (including Ethereum, Binance Smart Chain, and Huobi Eco Chain) can be exchanged among each other through a cross-chain mechanism called ThunderCore Bridge. By solving usability challenges and setting a new standard of reliability and security, ThunderCore leads the effort to bring wide adoption to blockchain technology.