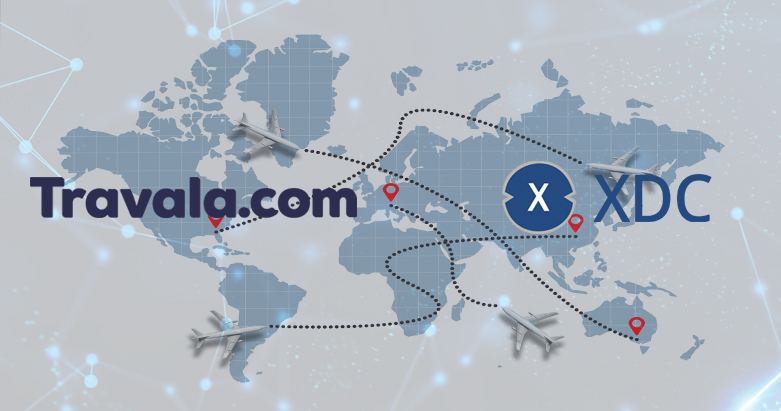 Travala.com, being the most epic online travel agency to accept cryptocurrency as one of its payment modes, now integrates payments through XDC token. This news has just been released officially citing the partnership between Travala and XinFin(XDC) network. The XinFin is based on its XDPoS network which is indeed powered by XDC protocol. XinFin network’s extreme security, hybrid decentralized blockchain and ascending performance now is all set to thrust up Travala.

Making a stand-out place in the present world’s digitized online travel platforms is not a piece of cake anymore. Intense and numerous online travel platforms have emerged out of nowhere and have vanished off without a trace. Amidst all this, Travala which was initially started in 2017, has now sought itself a prominent position in its overall market just by enabling and accepting various cryptocurrencies as its payment methods.

Eversince the rise of the crypto market, Travala was keen on incorporating the emerging new technological currency. From then on Travala has adopted various cryptocurrencies starting from Bitcoin , Ethereum, USDT, till the Dogecoin. This has been the most promising move for the sparkle on Travala. It did not just stop by incorporating crypto payments alone, instead it brought out its very own coin, the AVA (BEP-2 token standard) .  AVA not only serves as just another altcoin in the market , but has even more specific pragmatic implications. It establishes a healthy internal economy between various online platforms, thereby strengthening Travala. Though accepting forthcoming cryptos is nothing extraordinary for Travala, the  reason to be all hyped up about Travala’s partnership with XinFin network could be seen as follows.

The skeptical analysis is that Tarvala just doesn’t incorporate XDC tokens for payments. But instead it has joined together to make use of XinFin network. This will allow its strategies to play into corporate accounts and the platform’s internal requirements. The XinFin XDPoS Hybrid Network which runs on  XDC Protocol facilitates in a reconcilable and backward compatible blockchain. This blockchain proves to be highly efficient, enables instant transactions and trades,secure to the top most 1st tier. It features on being more flexible in terms of liquidation for financial firms. Amidst all this, the XinFin XDC serves as the 3rd generation of sustainable and reliable blockchain shattering all the cons of the earlier generations like the Bitcoin and Ethereum. It offers 2000+ TPS at an astonishing transaction time of just 2 seconds, on a negligible fee of just 0.00001 USD. XinFin XDC being the 3rd generation, is completely a green crypto with an energy consumption of just 0.0000074 Twh.

Altogether, the XinFin XDC is nothing but an overall package of nitrox all set to boost impeccably whatever that incorporates it in any form. All this live action of XinFin XDC has never been to life in a real world application. Travala will be the 1st platform upon which XinFin XDC will expose itself and unleash its ultimate potentials into real world use. The whole sector’s experts are waiting anxiously to witness such a marvelous bit of technology to play to its wish.

This partnership is sought to be a mutual benefit for both Travala and XinFin XDC. With XinFin XDC, Travala is all set to dominate the online travel and tourism market. Whereas, with Travala, XinFin XDC could test its powers in real world exposure.

SpaceMine (MINE) Is Now Available for Trading on LBank Exchange

Best Casino Games to Play to Prepare for the World Cup

Top Tools to Remain Anonymous in the Crypto Market

CoinEx | How to Buy CET: The Most Comprehensive Tutorial!