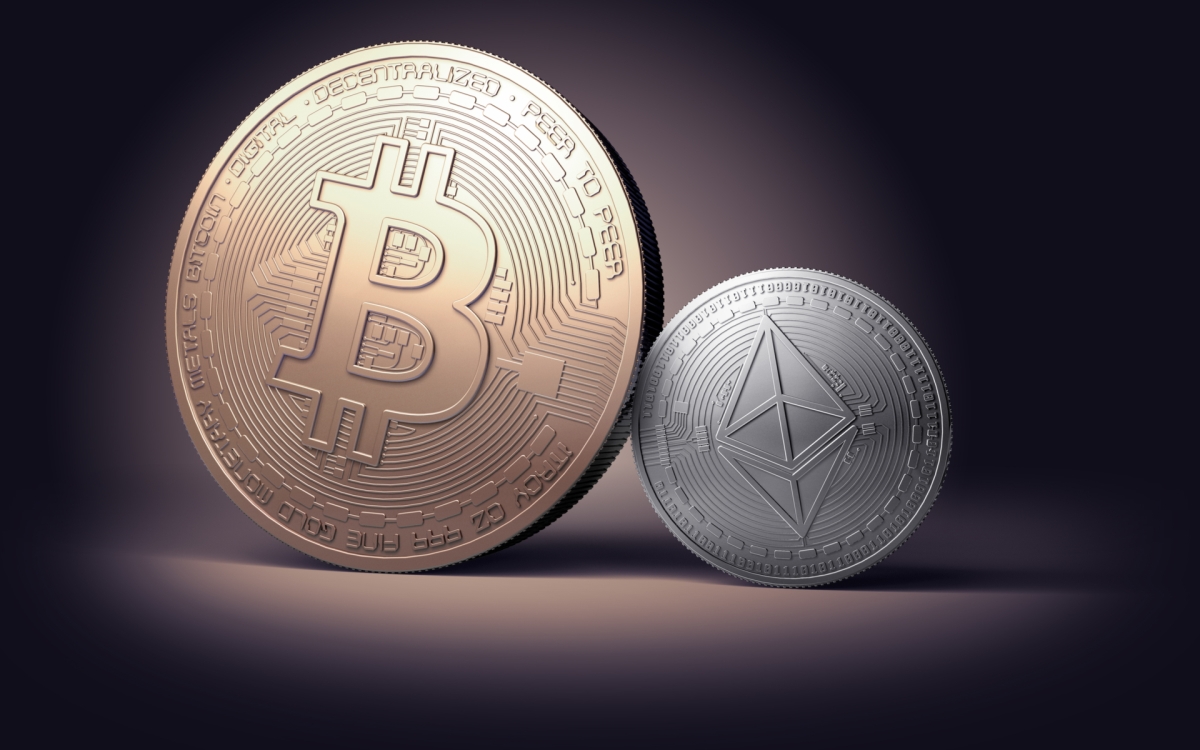 Olaf Carlson-Wee, CEO of hedge fund Polychain Capital, says Bitcoin may lose its edge over Ethereum as soon as the end of next year.

He even speculates that the market cap of Ethereum will surpass that of Bitcoin before the end of this year. He explained:

What we’ve seen in Ethereum is a much richer, organic developer ecosystem develop very, very quickly, which is what has driven Ethereum’s price growth, which has actually been much more aggressive than Bitcoin.

The value of Bitcoin has skyrocketed more than 500% since this time last year. It currently stands at around $2,500 USD, more than ten times the value of ETH. Nevertheless, Ethereum has grown even faster, and is now worth more than 20 times its value just four months ago.

Additionally, Ethereum has slowly creeped into Bitcoin’s market share, which has tumbled to nearly half its 90% stake just four months ago. In that same time frame, it has quadrupled its market share to 30%. Given current trends, it would not be surprising to see Ethereum take the lead within even a few months. 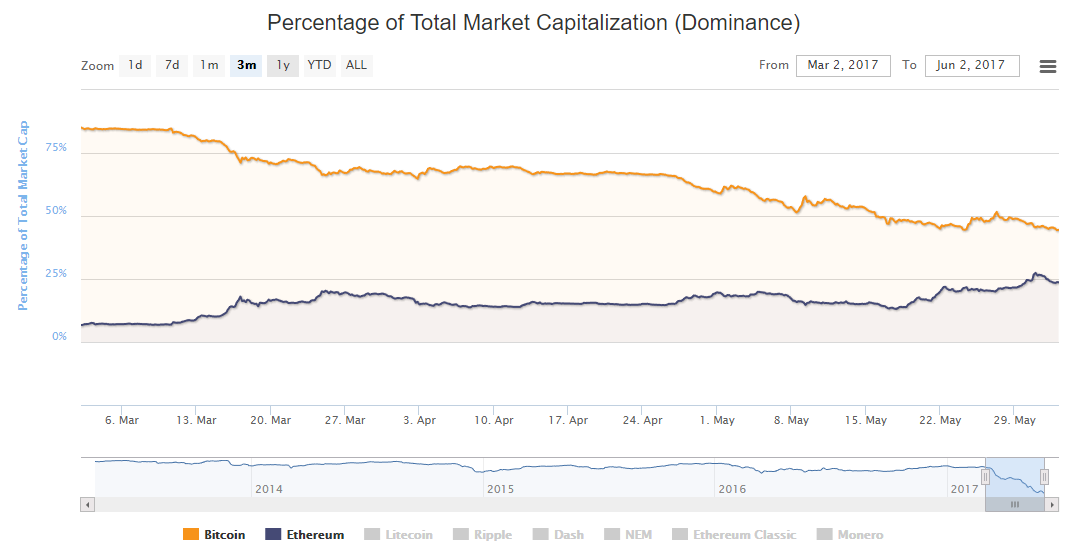 Ethereum Catching Up to Bitcoin

Proponents of Ethereum claim it offers numerous advantages, the most important of which is that it acts as a smart contract system. Ethereum allows decentralized apps to be built on its blockchain, creating a synergistic effect that increases its value as more projects are added to it.

“Each project…becomes a multiplier on the existing value of our system, resulting in exponential, rather than linear gains, for every new project that integrates with the others,” Reddit user Rune4444 explains. “Similarly every time any one of the above mentioned projects gains a new user or somehow grows in size, it ripples through the list and positively effects every other project in one way or another.”

Several industry giants including JPMorgan Chase, Microsoft, and Intel have also backed Ethereum, similarly believing that the Ethereum blockchain will allow companies to do far more than just transfer money between people. 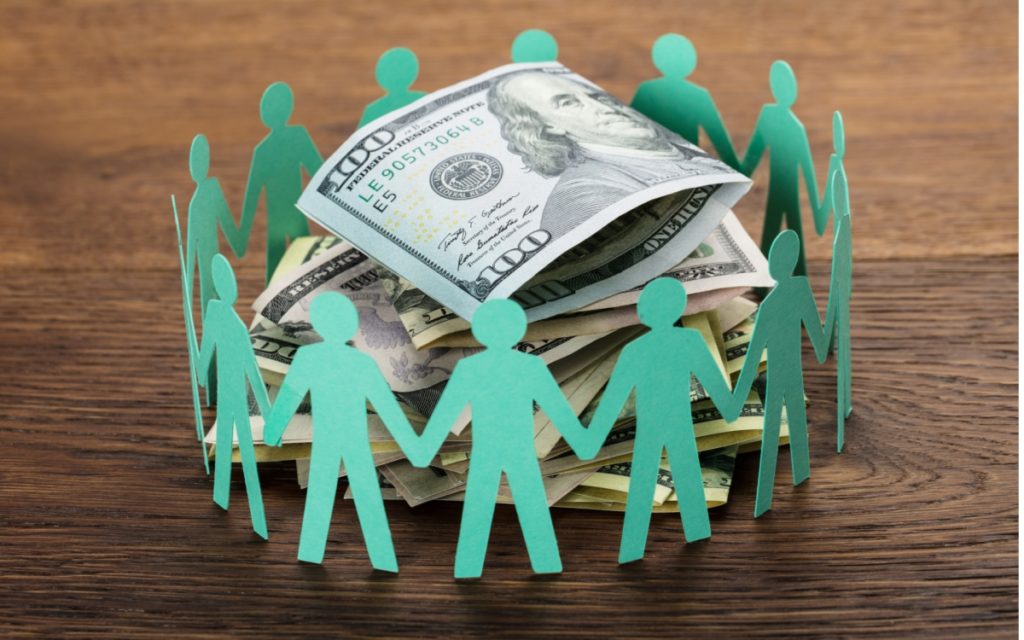 The recent Basic Attention Token (BAT), which can be used to obtain a variety of advertising and attention-based services on the Brave platform, is backed by the Ethereum blockchain. Its recent ICO generated about $35m and was sold out within 30 seconds.

Nevertheless, there are clear distinctions between the two cryptocurrencies such as Bitcoin’s capped supply of 21 million units compared to the current supply of over 90 million ETH tokens and growing. In other words, only 21 million BTC will ever exist while the number of ETH tokens can theoretically be expanded indefinitely, depending on how its developers choose to proceed. There’s also the hard fork precedent and risk of chain splits, which we’ve seen with Ethereum Classic following the DAO debacle, which included a notorious hack in June 2016, when over $59 million in ether were stolen.

Moreover, Ethereum is also not immune to some of Bitcoin’s problems, namely scaling. For example, the Shapeshift exchange recently posted notices regarding slow transaction times due to the BAT ICO. In fact, transaction fees are starting to gain on Bitcoin as network capacity limits are tested.

Bitcoin’s dire need to increase capacity currently tops the list of traders’ concerns. With cryptocurrency’s latest explosion in investors, exchanges have been bursting at the seams trying to manage the demand on their systems.

Several exchanges have faced technical difficulties in the past weeks. Numerous Reddit threads have also complained of high fees and sluggish transaction times.

It is possible these technical problems are slowing the growth rate of Bitcoin in comparison to Ethereum. Many are worried that Bitcoin’s price is climbing faster than its fundamental value, which is as a decentralized medium of exchange, not a speculative commodity.

Nevertheless, Bitcoin’s recent adoption in Asian countries as well as piqued interest from companies and traditional finance continue to fuel its rise.

Do you think Ethereum will surpass Bitcoin in market value? Or will it encounter its own set of problems as its growth continues? Tell us in the comments!