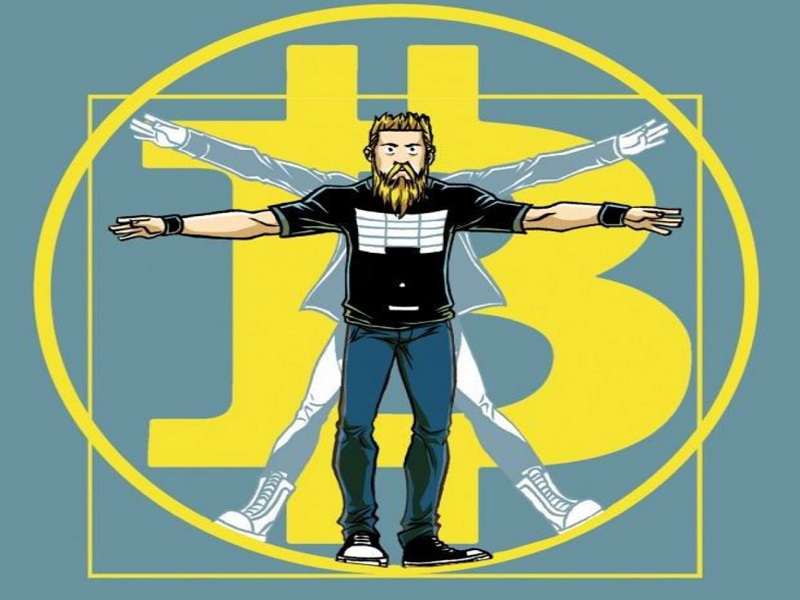 In late December 2015, at its Mexico City event, the Latin American Bitcoin Conference made history when it auctioned off a copy of the popular bitcoin comic, Bitcoin: The Hunt for Satoshi Nakamoto, for 20.4 bitcoins. At the time of the auction, that amounted to around $10,000 USD. Two men, Rodolfo Andragnes and Sebastian Wain, won the comic book together. 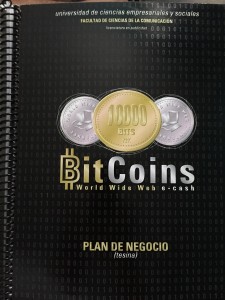 The logo for Rodolfo’s 1997 BitCoins project.

Rodolfo claims that his involvement in the Bitcoin world began in 1997, more than a decade before Bitcoin even existed. As the Internet rose to prominence, Rodolfo drafted a business plan for an online loyalty program. The name of this program? BitCoins. In 2000, Rodolfo registered the domain BitCoins.com. He says that he even created a logo for the project, which featured the bitcoin symbol we are all familiar with today.

Although his loyalty program was put on hold, he sat on the domain name over the years. Rodolfo says that he checked about once a year to see if anyone had done anything with the name “BitCoins,” but thinks that he “must have stopped doing this in 2008, because I never realized someone was doing something with the [name] until 2011.” That year, Mt. Gox CEO Mark Karpeles approached Rodolfo and made an offer to buy BitCoins.com. This was Rodolfo’s introduction to Bitcoin, and he quickly jumped onboard. Karpeles held the domain until the Gox collapse in 2014, when he auctioned it to raise funds for his creditors.

“It’s a fun story actually. I always liked the name, so I kept the name during the years expecting to have something build on top of it. And finally, Satoshi created something for me.”

After selling BitCoins.com to Karpeles, keeping part of the payment in bitcoin, Rodolfo decided that he needed “to give back to the world what they gave me,” and so he set to work building a Bitcoin commmunity in Latin America. In 2013, he founded Bitcoin Argentina, an NGO focused on spreading Bitcoin awareness. Additionally, Rodolfo helped found the Bitcoin Center in Beunos Aires. As the owner of Cesyt — a college that teaches tourism, culinary arts, and administration — Rodolfo led the school to become the first educational institution in the world to publish its degrees in the blockchain. And to top it all off, Rodolfo leads the small team that organizes the Latin American Bitcoin Conference, an annual gathering located in a different country each year.

So far, the Latin American Bitcoin Conference has hosted 4 events. According to Rodolfo, “We did one in Buenos Aires, two in Brazil, and one in Mexico this year [2015].”

“I am very into bitcoin, I am a big fan and promoter.”

Sebastian Wain has been a tech enthusiast from a young age, programming since he was 8 years old. In university, Sebastian earned a degree in computer science. In addition to programming, Sebastian says that he likes “research, business, writing articles, and especially complex projects.”

After being introduced to Bitcoin by a “prospective customer,” Sebastian spent a few years talking about the technology with Sergio Lerner, who Sebastian says “is very involved in bitcoin security.” Together, Sebastian, Sergio and Pablo Yabo co-founded CoinFabrik, a company dedicated to developing “cryptocurrency applications for other companies, and open-source code for the development community.” Later on, Sebastian founded Nektra with Yabo, which develops “cybersecurity solutions and virtualization products and custom solutions.”

The Bitcoin Comic Book: An Auction for the Greater Good 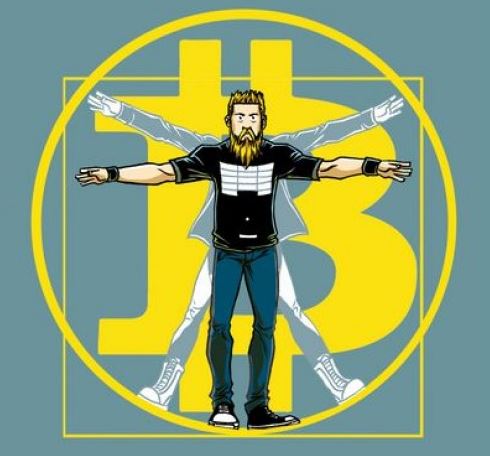 The Hunt for Satoshi Nakamoto is an icon in the Bitcoin community, making a big splash when the English-language version of the book went on sale in late 2014. The comic book is set in a fictional cypherpunk city, and tells a story about a search for Satoshi Nakamoto, Bitcoin’s enigmatic creator.

Rodolfo has a long history with the comic book, going all the way back to its funding stage, when he donated to the crowdfunding campaign set up to raise money for the book’s creation. After the book’s release in 2014, the Latin American Bitcoin Conference auctioned a copy for approximately 3.5 bitcoins at its Brazil event. Rodolfo says that he approached the winner and made a proposal, “if you give back the book, we will make it signed by a lot of entrepreneurs in Bitcoin.” The winner agreed, and Rodolfo set out to make good on his word. He recruited FinTech Compliance Executive Juan Llanos for this arduous job. Llanos traveled to 10 different countries, and succeeded in getting this copy of the comic book signed by 105 entrepreneurs in the Bitcoin ecosystem. Some of these names include Roger Ver, Jeff Garzik and Andreas Antonopoulos.

The following year, at the 2015 Latin American Bitcoin Conference in Mexico City, Rodolfo decided to participate in the auction of the signed comic book. When the auction reached around 9.5 bitcoins, Rodolfo says he approached Sebastian and suggested that they pool their resources and contribute 10 bitcoins each, and then share the book if they won. “If we were both willing to put 10 bitcoins,” Rodolfo says, “why wouldn’t we put 10 bitcoins each to raise more capital for BitGive, but having a shared custody of the book?”

The purpose of the auction was to raise money for BitGive, a bitcoin-based non-profit that uses technology for philanthropy. BitGive was established in 2013, and has helped many people and organizations help those in need. The Water Project, for example, raised a total of $11,188.90 USD through BitGive. The Water Project works to improve the lives of Africans “by providing reliable water projects to communities in sub-Saharan Africa who suffer needlessly from a lack of access to clean water and proper sanitation.” BitGive’s newest project is the “Bitcoin Charity 2.0 Initiative,” which aims to “build the first Donation Transparency Platform for donors and NGOs using blockchain technology!”

For Rodolfo and Sebastian, this auction represented the core meaning of Bitcoin. Rodolfo’s work in Bitcoin is aimed at spreading awareness and helping people. According to him, The Hunt for Satoshi Nakamoto represents a “very nice and a good way of sharing Bitcoin. . .it’s an additional, fun way of talking about Bitcoin.” Furthermore, by using the auction to raise money for BitGive, Rodolfo feels that he is increasing his ability to help people, saying that, “I think the BitGive project is also a multiplier itself, we’re helping them for helping many others.” To Sebastian, Bitcoin is “a milestone in computer science,” and he is “inspired by bitcoin’s technical innovation and the potential for widespread socioeconomic change.” Whether it was his intention or not, participating in the auction and raising money for BitGive will certainly help advance the socioeconomic change that gives him inspiration.

“[The comic book] is everything that is unique in bitcoin, it does have for me some symbolic meaning. Mostly for me, being able to help it has most to do with what we’re doing.” 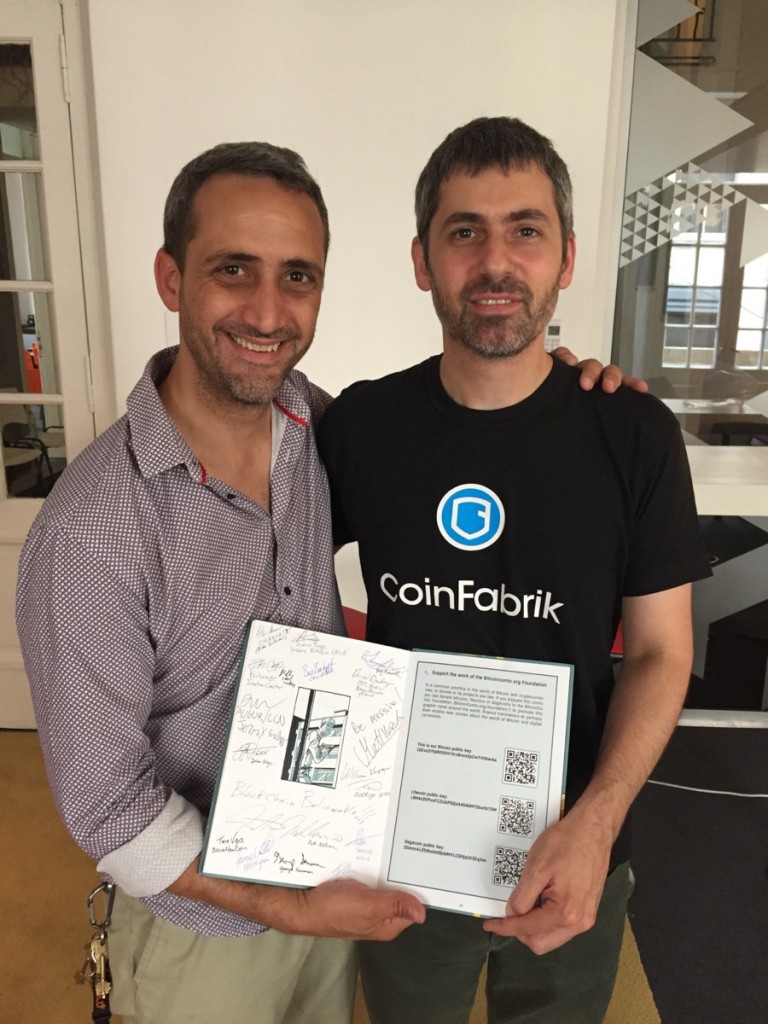 In their shared custody of the comic book, Rodolfo and Sebastian have decided to use it to further spread enthusiasm about Bitcoin, hopefully helping even more people in the process. After some deliberation about what to do with the book, the two owners settled on displaying it in the Buenos Aires Bitcoin Center. Rodolfo says that they’re trying to figure out a way to keep the space sealed, to prevent it from being stolen by visitors. Nonetheless, Rodolfo thinks that it would be “nice to share it with more people.”

More Philanthropy and Innovation on the Horizon

Now that they have figured out what to do with their $10,000 comic book, Rodolfo and Sebastian have their eyes set on the future.

Rodolfo’s biggest project for 2016 is organizing the next Latin American Bitcoin Conference. Particularly, he and his crew are trying to decide on this year’s location. They have a few ideas swirling around, such as Buenos Aires, Chile and Cuba, but they haven’t nailed anything down. Rodolfo will also be working on two personal projects of his: Amiko and the Bitcoin time capsule. Amiko is the revival of his 1997 BitCoins project, with a new title for obvious reasons. Rodolfo plans to use the blockchain as the background technology for his reborn project. The Bitcoin time capsule is a literal time capsule that will contain $25,000 USD in gold and an equal amount in bitcoin. To Rodolfo, the time capsule project is “another way of promoting bitcoin, talking to people about bitcoin through something that they understand.”

Sebastian has three projects in the works, all centered around Bitcoin. Sig3 is an “automated cosigner for multisig wallets.” Sebastian says that there is “currently no standard protocol for communicating copayers, “ and that he expects this area of Bitcoin to present “many development challenges.” Sebastian and his partners are also working with Wayniloans to develop a bitcoin loan application, which Sebastian thinks “could easily become one of bitcoin’s killer applications.” The third project is called KryptoKit, and it is “an exciting cryptographic library project.”

In terms of Bitcoin in general, both auction winners think the future is bright. Rodolfo is confident that Bitcoin will enjoy global success “as a technology because it is the most efficient way to do things.” He thinks that “Latin America has more traction for the financial aspect [of Bitcoin],” but ultimately believes that Latin American entrepreneurship “will have to do with the whole concept of Bitcoin and the Bitcoin technology.” When asked where he sees Bitcoin 10 years in the future, Sebastian said, “I see the main issues like scalability and performance solved, and also a good platform for micropayments running.” He does foresee some challenges for Bitcoin, though: “I think the business aspects will be more challenging than the technical aspects in the future. Bitcoin’s success depends on reaching a critical mass and how regulations undermine its adoption around the globe.”

Have you read The Hunt for Satoshi Nakamoto? Let us know in the comments below!