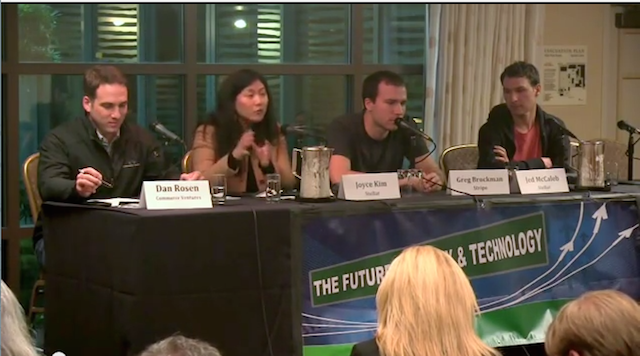 San Francisco, California — On December 2, Stellar Executive Director Joyce Kim sat on a Stellar panel and gave an overview of the Stellar project to the audience at The Future of Money and Technology Summit, a yearly fintech conference that meets to discuss the evolution of money. The panel was called “Stellar: Building a Common Financial Platform”, and also included Stripe CTO Greg Brockman and Ripple Founder Jed McCaleb. The entire panel session was streamed live courtesy of Bitcoin Magazine, and Joyce Kim’s overview on Stellar is transcribed below.

“Stellar is a financial protocol that essentially increases the interoperability between diverse financial systems and diverse currencies. So it allows any kind of currency or any kind of value Dollar, Euro, Bitcoin, [or] Pesos to move freely within the network. It also allows for any kind of transaction size — from large business payments down to micro-transactions. It is intended to be a backend for real time and faster payments. And, it also is a backend for lower [fees on] foreign exchange type of transactions [and] cross border transactions.

[Stellar] is supported by a non-for profit, the Stellar Development Foundation which Jed and I are a part of. And, it is structured that way so it can behave more like the Internet and more like email, SMTP, and also different kinds of core infrastructure that are not owned by one entity. For those of you that are familiar with how these protocols are set, there is typically standard setting bodies like the [Internet Engineering Task Force], IETF that comes together, has multiple stakeholders from industry and the public to decide how these protocols should work.

One of the things that makes Stellar different from the other digital currencies out there, is that it is considered to be pre-mined; all the stellars exist. A certain number of Stellar exist to begin with, and then they were all essentially gifted to the foundation which is responsible for distributing them to the world as widely and evenly as possible. The Foundation is allowed to hold back 5% of the stellars and 95% have to be given away via a combination of educational and nonprofit programs. There is also 1% inflation, and that has it’s own interesting methodology for how that is distributed. It’s essentially a direct form of democracy where the existing holders of stellar get to decide where the new currency goes. And all of that is packaged together to remove the reliance, or move the focus away from the currency aspect of stellar and focus on the protocol aspect of it.

The currency is not necessary as a business model, and it’s also not intended to be an investment vehicle so there are some nuances there that we can dive into as we move along in the panel. And one of the goals of the foundation is to provide broad access and education to as many people as possible so to date we have funded over 4 million wallets, and we can get into the statistics of that as well. And, quick recap, we launched about 3 months ago, our demographics are really interesting. It’s mostly developing world users after the US and Europe and a lot of developing world countries. There are more people on the Stellar protocol than on any other digital currency protocol — and this is because of the accessibility of the giveaways. The user base is 35% female. And I actually think for the first time in a fintech panel, this room is doing better than even that; so I’m really excited about that. Good job Brian if he’s in here. And then in terms of engagement, we have about 140,000 weekly active on the network.”

Tell us what you think of Stellar in our comments section below.

5 BTC + 300 Free Spins for new players & 15 BTC + 35.000 Free Spins every month, only at mBitcasino. Play Now!
BitStarz Player Lands $2,459,124 Record Win! Could you be next big winner?
Get 110 USDT Futures Bonus for FREE!
What is the best crypto casino in July 2022? Read our comprehensive comparison! We made deposits, played and reviewed 80+ crypto casinos to choose the best one.
ShareTweetShareShare