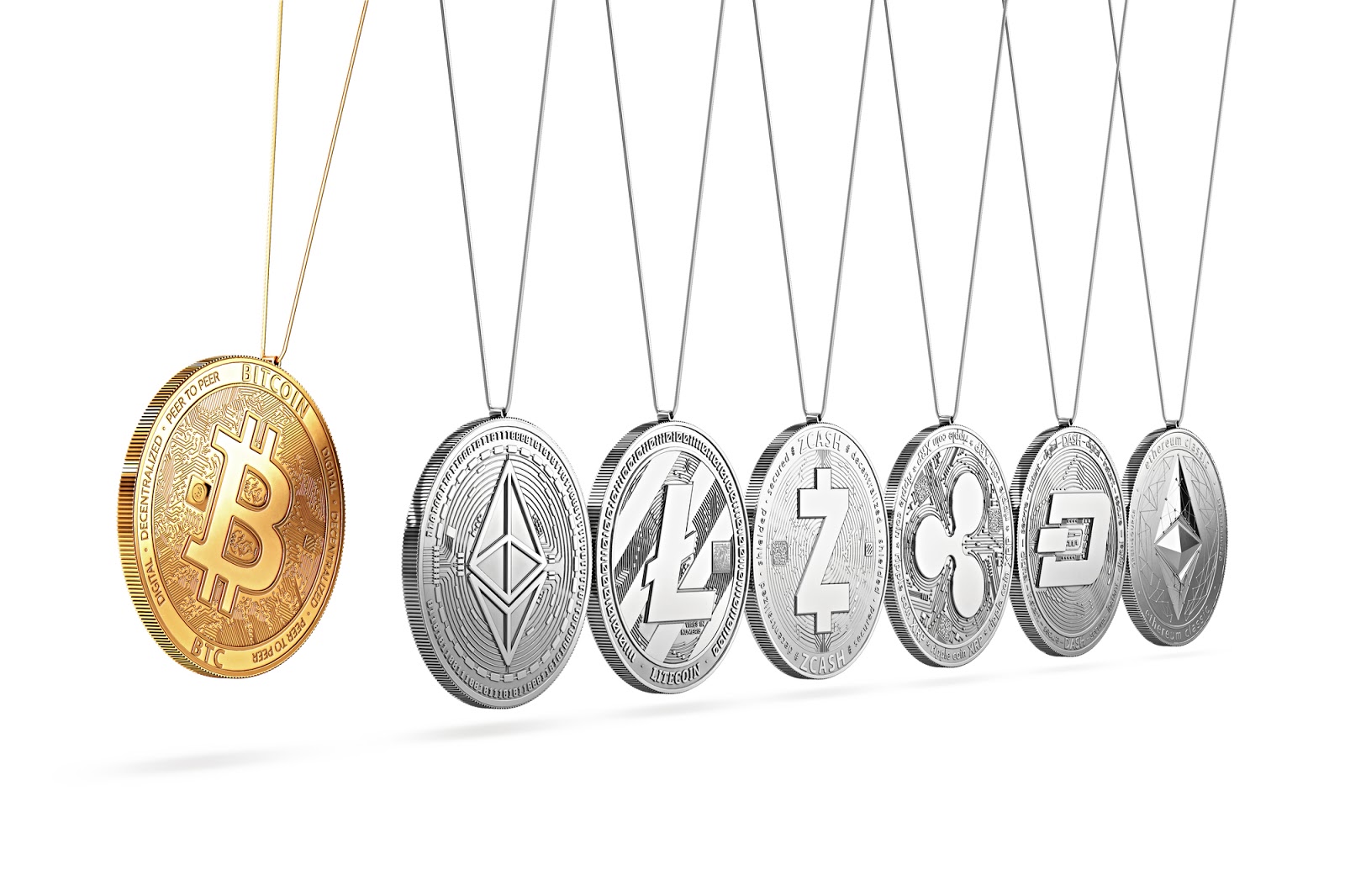 Following the tumultuous last couple of days that saw Bitcoin plunge to lows of $28,950, the market as a whole has proceeded to make a swift recovery, with a vast majority of the top-10 cryptos once again sitting in the green. And while that may be a regular day in the office for most crypto investors, an increasing number of analysts have been issuing warnings for individuals to brace for impact as the coming few weeks and months could see an increased amount of volatility.

Despite all of the sell-offs and volatility that was witnessed over the last week, data available online clearly shows that the number of addresses with 1,000 or more bitcoin (referred to as “whales” in the crypto world) has continued to increase. This “buy-the-dip” strategy is not uncommon and has traditionally been used by investors across markets. However, this time around, with the introduction of institutional players into the digital asset sector, such consolidation-centric activities have increased substantially, resulting in continuous fluctuations in the price of most cryptos.

It’s Bitcoin’s reign but is there a new sheriff in town?

There is no denying that Bitcoin is the clear OG of the crypto world, as is probably best highlighted by the fact that the flagship digital asset has been able to pique the interest of many prominent traditional financial institutions – such as Microstrategy, BlackRock, Grayscale – over the last year or so.

Not only that, in recent months, a number of banks and venture capital funds like JP Morgan, Raiffeisen, Pantera Capital have projected BTC to scale past beyond the $100k mark with ease, indirectly indicating their growing confidence in this yet-nascent asset class.

That being said, it seems as though with each passing day Ethereum, the second-largest cryptocurrency by total market capitalization, is fast showcasing signs of decoupling from Bitcoin. In this regard, a report released by leading crypto exchange Bybit indicates that between 14-20 Jan, the price of Ether outperformed Bitcoin by posting a 35% growth, which has historically never been witnessed.

On a more technical note, when Ether hit its all-time high of $1,440 on Jan. 19, its market dominance rose up to a relative high of 15.65%, levels that were last witnessed back in 2018, when the ICO bubble was in full bloom.

It is no secret that the DeFi boom of 2020 occurred in large part due to the technological capabilities afforded by the Ethereum ecosystem to developers all over the world. This is probably best highlighted by the fact that 29 of the top 30 Decentralized Finance platforms have been built atop the Ether network.

Furthermore, the total locked volume (TVL) across various DeFi platforms currently stands at a whopping $23+ billion, which is quite impressive, especially when considering that a majority of crypto investors are still only beginning to learn about DeFi. 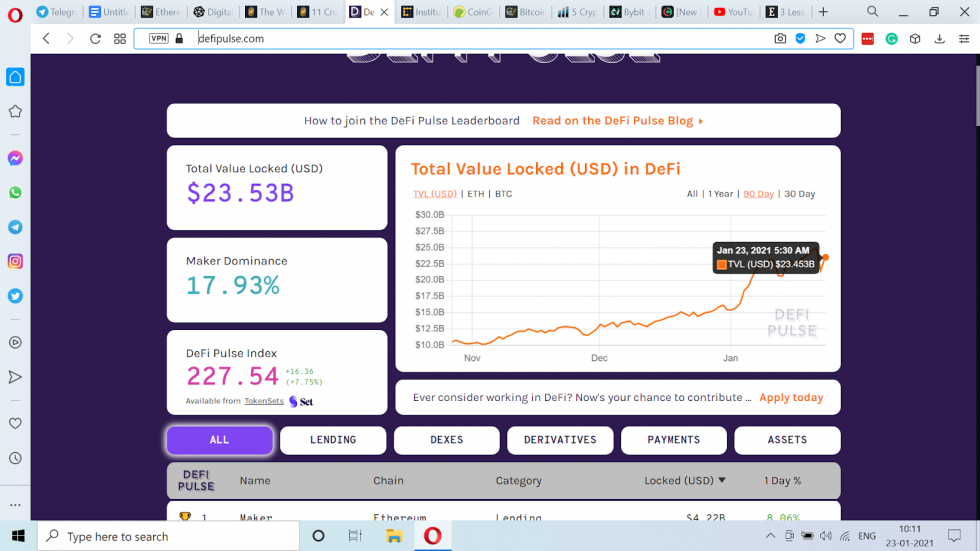 Not only that, the daily trading volume on the Ethereum network is estimated to be nearly 30% higher than that of Bitcoin, with the number most likely to rise especially with the launch of the Beacon Network that currently has around $3 billion locked in staking pools.

Alt-season is coming to an exchange near you

In addition to Ethererum exhibiting sizeable returns during this ongoing bull season, a number of investors seem to have been grossly overlooking the fact that a number of other altcoins too have incurred some serious gains in recent months.

According to Bybit, between Dec 1 – Jan 17, a number of prominent alts like Decred (DCR), Dogecoin (DOGE), Cardano (ADA) have exhibited gains of 126%, 175%, and 146% respectively when compared with BTC’s value surge of 91% during the aforementioned time window.

Lastly, a number of other assets like Litecoin (LTC), ChainLink (LINK), Stellar (XLM), Bitcoin Cash (BCH) too have showcased sizable growth in recent months, with each of these tokens gaining more than 65% in value. What’s interesting here is that unlike the altcoin boom of 2017, where most currencies simply gained traction because of the hype surrounding them, this time around the growth of most tokens is being driven by innovation and real-life use cases.

Altcoins that seem primed to succeed in 2021

While Ether is a no-brain addition to the list of alts primed for success in 2021, individuals looking to diversify their portfolios can potentially explore a host of other use-case driven projects to maximize their gains in 2021.

For example, Chainlink is a project that is looking to decentralize the internet by allowing smart contracts to be deployed in relation to a host of real-world applications. Its utility has helped drive the price of its LINK significantly, so much so that the currency is now in the list of top-10 cryptos by total market capitalization. Not only that, it should be pointed out that over the course of the past year, the currency has exhibited gains of over 700%.

Similarly, PolkaDot is a project that is looking to tackle the issue of blockchain interoperability, regardless of a platform’s features or its status as a private or public chain. Its innovative design and amazing technological proposition have helped push DOT to the fourth spot on the top-10 list of cryptos within a span of just six months.

Some of the other altcoins that seek to tackle real issues plaguing the crypto sector and therefore may be worth considering as long term investment vehicles include Cardano (ADA), Tezos (XTZ), Tron (TRX), Synthetic Network Token (SNX), VeChain (VET) and EOS (EOS).