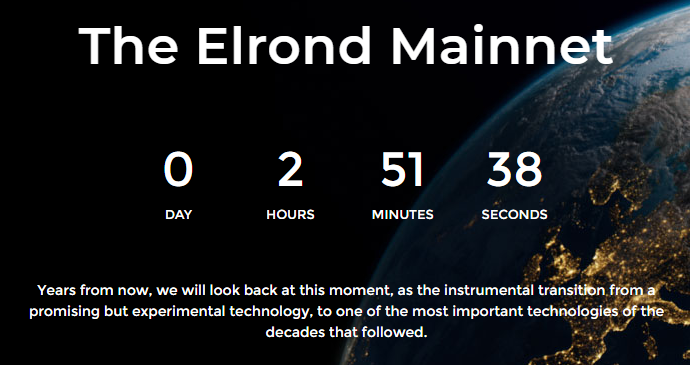 Elrond, the scalable blockchain that received an early endorsement from Binance, has today launched on mainnet. The project has also announced the launch of Maiar, a user-centric decentralized finance application, along with a new tokenomic model designed to create increased demand and drive value for the ERD token. Elrond concluded a successful IEO via Binance’s Launchpad IEO platform in July 2019.

Elrond emerged with the promise of a high-throughput, high-security, and low-cost blockchain platform that aims to provide an alternative to existing financial infrastructure. The principles behind the project are that the current economic model is skewed towards the wealthy, locking out the unbanked, and creating risks such as those that blew up the 2008 global financial crisis.

Since the token sale last July, Elrond has been focusing heavily on developing and testing its testnet. The incentivized testnet, running a “Battle of the Nodes” attracted 1500 nodes, demonstrating a peak throughput of 263,000 transactions per second.

At the same time, the company has been establishing various partnerships designed to make the ERD token more liquid and accessible. For example, earlier this month, the project announced that Swipe and Crypto.com would be integrating the ERD token, making it available to over 3 million new users.

Both of these developments have been successful to the point that Elrond is now ready to unleash Maiar, the first mobile application connecting with the live mainnet. Maiar offers many features that tie into Elrond’s broader goals. The app only requires a phone number to sign up, without the need for a user to maintain their own private keys, thus making it accessible to anyone in the world.

Security can be configured in a progressive way linked to the value of funds held in the app, and users can even link other users such as friends or family into their account as a co-signatory for transactions or withdrawals.

Once a user signs up, they can transfer any kind of value between peers anywhere in the world. Maiar will be available for immediate download, although the team foresees that there will be several iterations to come over the first month.

At the same time as the launch, Elrond has announced several critical changes to the tokenomic model for its native token, ERD. With immediate effect, the total issuance will be reduced to 20 million from its current cap of 20 billion.

In a comparable way that the Bitcoin economy is designed to limit supply over time, Elrond will operate a progressive decrease in the issuance of new tokens. For the first year, ERD issuance will be decreased by 10.8%, with further gradual reductions over the next ten years, until there are no new tokens released in year eleven.

This increasingly restricted supply is designed to push up demand and thereby the value of the ERD token. The project is calculating that within the fifth year of the new model, it will see a stock-to-flow ratio of 275.

Many of Elrond’s fellow Binance Launchpad alumni projects that made their debut around the same time are now also starting to bear fruit. Matic, a second layer platform for Ethereum, launched in May. Meanwhile, Kava, a cross-blockchain lending application, opened with BNB as its first asset in June.