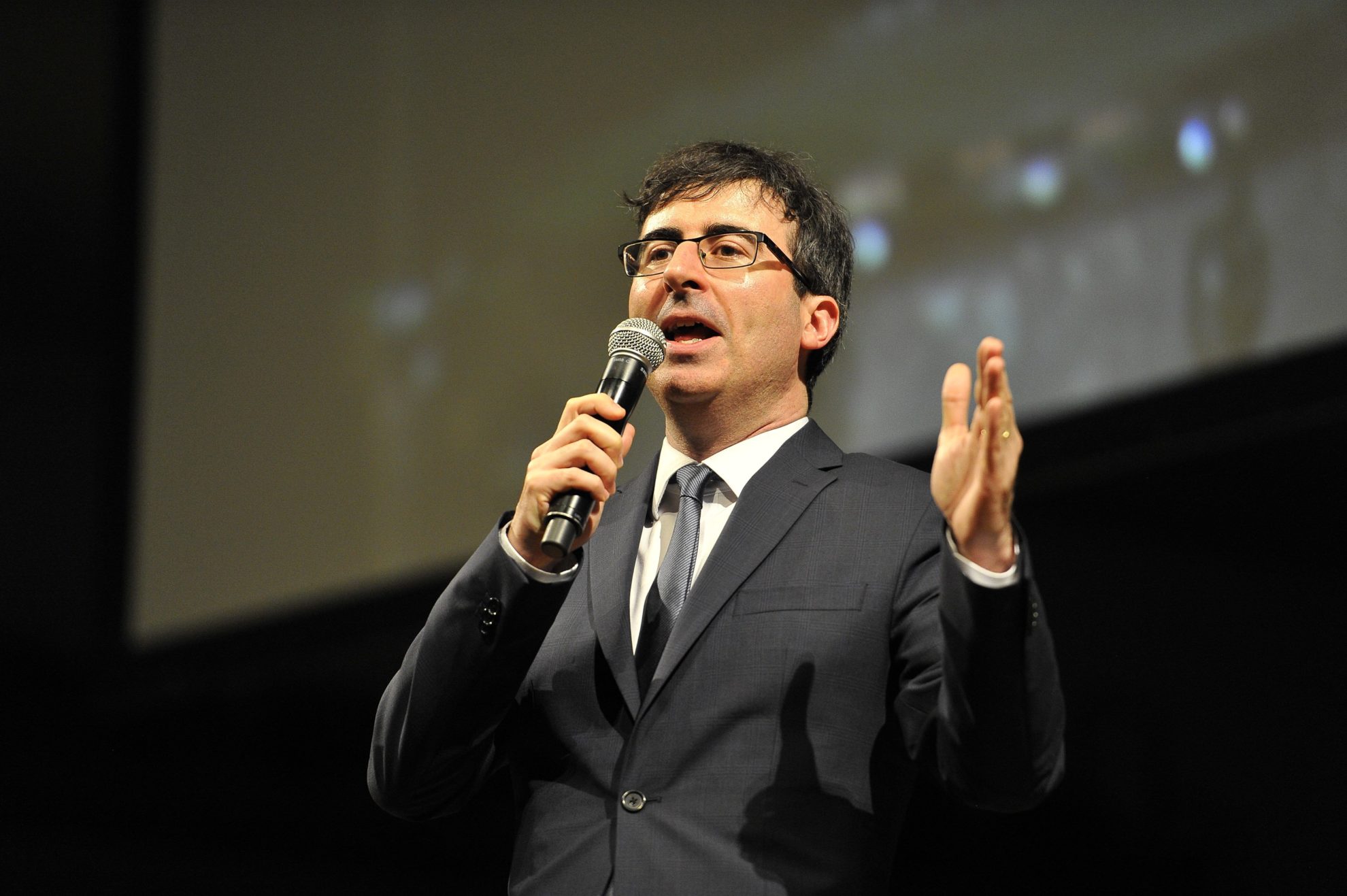 The recent cryptocurrency craze has new investors throwing plenty of money into questionable digital assets, and markets with volatility they aren’t prepared for. John Oliver’s latest segment on cryptocurrency not only informs viewers of the current state of the market, but also hammers home why they should always think twice before taking the plunge.

Cryptocurrency Isn’t for Everyone

On the latest segment of HBO’s “Last Week Tonight with John Oliver,” Bitcoin and the cryptocurrency markets were given both a fair assessment and overview geared toward both the investors on the sidelines and those who were recently onboarded.

After explaining the basic premises behind both Bitcoin and blockchain technology, Oliver takes the time to caution viewers against blindly throwing money at the markets with the expectation of high returns. He also continually stressed the fact that investors should understand what they’re putting their money in, as well as to be prepared to lose it all.

Don’t worry if you still don’t understand it – most people don’t.

Citing the recent share price activity of companies that recently rebranded to include “blockchain” in their name, Oliver also points out that simply the word itself has become a magnet for investment. Earlier this year after the announcement of its own cryptocurrency, shares of Eastman Kodak jumped 60% simply because investors were enticed with their ‘forward-facing’ pivot.

While viewers of Oliver’s show might be familiar with only a handful of assets, they’ve now been introduced to a slew of questionable altcoins such as TrumpCoin, JesusCoin, InsaneCoin, and Electroneum. Considering that all it takes to create a new cryptocurrency is to leverage existing code, the potential for the hyper-generation of new assets is endless. 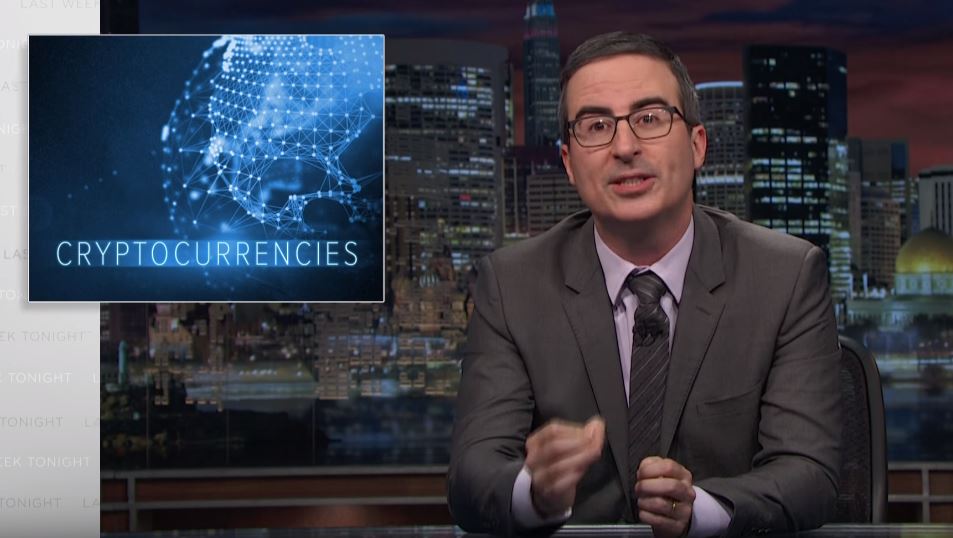 Moving toward the massive raises happening in the ICO space, Oliver turns to EOS, an up and coming blockchain platform to scrutinize its massive raise based on future promises.

It took Facebook seven years to raise a billion dollars from investors, it took Uber five years – EOS surpassed that in around nine months – and that is despite the fact that the Wall Street Journal described Block One as ‘a software startup that doesn’t plan to sell any software’.

Oliver continued his segment on EOS by bringing up Block.one’s co-founder Brock Pierce, and his relationship to the company. Referring to Pierce as a “sleepy, creepy, cowboy from the future” due to his questionable attire worn at press events and conferences, Oliver encouraged viewers to search “Brock Pierce Scandal” on Google. This typically will lead to search results referencing Pierce’s former employment at Digital Entertainment Network, which ended up being connected to two civil lawsuits involving the sexual abuse of minors.

This led to an immediate search breakout for terms like “EOS,” “Brock Pierce EOS,” and “EOS scandal,” and a price drop which quickly brought EOS down 7%. Poking fun at Pierce’s ‘unicorn wedding’ at popular festival Burning Man, Oliver creates a link to the absurdity surrounding EOS’ current valuation and the marketers behind it being trusted with the raised funding.

This isn’t to say that EOS has plenty of potential as another blockchain platform, but rather to take an introspective look at the individuals raising money at speeds exponentially greater than traditional corporate raises with functional products. 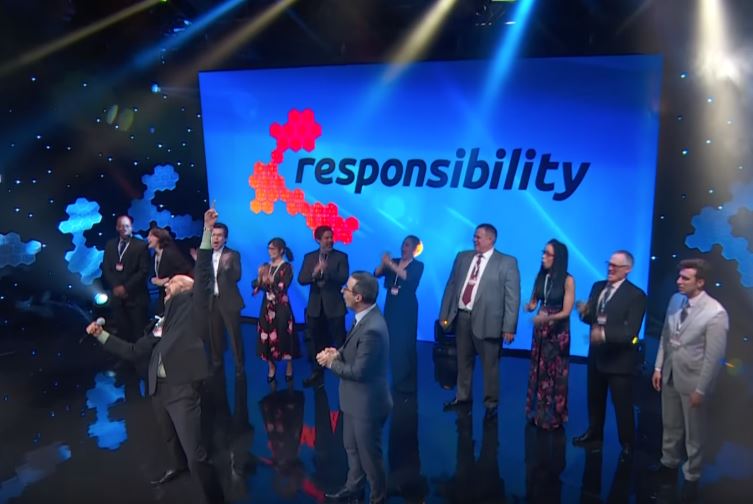 To end the segment, Oliver reminds viewers that investing in cryptocurrency is akin to gambling and that the markets are still highly unregulated. Governments won’t be able to cover any losses as result of wild market fluctuations, as exchanges aren’t typically insured or registered. While plenty of individuals have pushed new investors toward the cryptocurrency markets as a means to quickly get rich, Oliver reminds viewers to first make sure to research what they’re getting themselves into.

Recreating the infamous promotional conference video by now-defunct Bitconnect, Oliver’s segment ends with asking actor Keegan-Michael Key playing the role of Bitconnect promoter Carlos Matos whether or not he should throw everything he owns into cryptocurrency.

While the media hysteria surrounding the cryptocurrency market can make it seem quite enticing at times, segments like Oliver’s remind potential new investors of the dangers of investing in this new asset class.

Do you think John Oliver’s segment on cryptocurrency and blockchain technology was delivered well? Do you think there are other questionable projects in the space that he should’ve covered? Let us know in the comments below!