These Key Factors All Point to an Imminent Bitcoin Rally: Analyst Claims

Bitcoin and the rest of the crypto market have been caught in the throes of an intense bout of consolidation throughout the past few days.

The selling pressure within the lower-$24,000 region has stopped its uptrend dead in its tracks, with each subsequent visit to this level sparking rejections as well.

One trader believes that this trend may soon come to a rapid end. He notes that the support just below where it is currently trading, coupled with a recent test of its demand zone and reset funding rates, seems to point towards imminent upside.

Although Bitcoin’s price action has been stagnant over the past few days, it was able to avoid an intense selloff seen by the aggregated altcoin market yesterday.

This decline caused multiple major altcoins to see massive losses and is widely thought to have been sparked by XRP’s 50%+ decline.

Bitcoin remained stable within the $23,000 region and gained some serious market dominance due to this trend.

These Key Factors Suggest BTC is Poised to Explode Higher

One trader pointed to a few key occurrences as justification for being long on Bitcoin at the present moment.

He notes that the demand sweep that took place yesterday, its funding and premium being fully reset, and a generally fearful and bearish sentiment amongst investors all point to imminent upside. 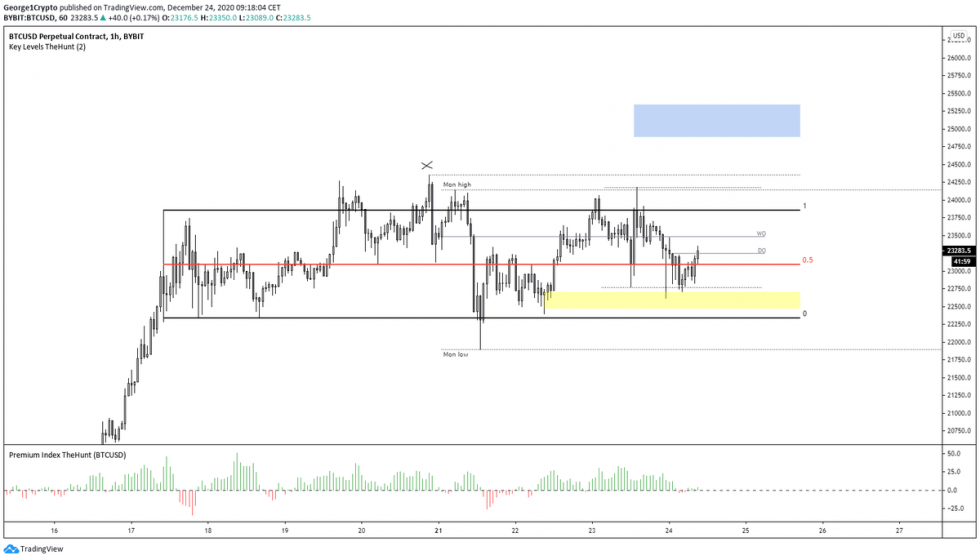 The coming few days should shed some light on where the entire market will trend next, as Bitcoin’s macro trend is still guiding that of altcoins – despite their underperformance.