Will Justice Be Served? Bitcoin Trading Platform BitConnect Sued by Six Investors Who Lost Over $700k

Will Justice Be Served? Bitcoin Trading Platform BitConnect Sued by Six Investors Who Lost Over $700k

Six BitConnect investors, who collectively lost over $700k on the platform, are taking the company and its affiliates to court in the US.

Earlier this month, BitConnect released this piece of so-called ‘System News’ on its website, outlining the fact that closing the Bitconnect lending and exchange platform. In line with the halt, the company reported that it would be moving forward with some key changes made to its platform, primarily rooted in the idea that BitConnect would serve as a wallet service and, at the same time, would news and educational services through its platform.

At this time, we are closing the lending platform only. The BCC Exchange will work as usual and the wallet service will remain operational to hold your BCC on the website.@bitconnect @hitbtc @CoinExchangeio @livecoin_net @CoinMarketCap

From its early days of operation, many suggested that the system that the company was operating was akin to a Ponzi scheme. The company’s offer of interest on holdings of BitConnect Coin, its proprietary token, while not guaranteed, still seemed too good to be true and the affiliate nature of the platform seemed to reinforce this suggestion.

The latest news to hit press as relates to this saga is that a pool of alleged ‘victims’ – investors who claim to have lost between $15,000 and $200,000 individually through the company ending its operations – have sued BitConnect, filing a suit with a U.S. District Court in West Palm Beach, Florida.

The suit, which is available here for anyone that wants to check out the allegations, outlines that BitConnect was offering up to 40% interest monthly on BitConnect Coin holdings and was promoting this through a variety of channels, luring unsuspecting investor capital.

It goes on to highlight the fact that while the company promised to support the value of its token once it halted its lending operations, this promise was unsubstantiated because the token lost more than 90% of its value almost immediately subsequent to the news, wiping out the vast majority of the token’s holdings. 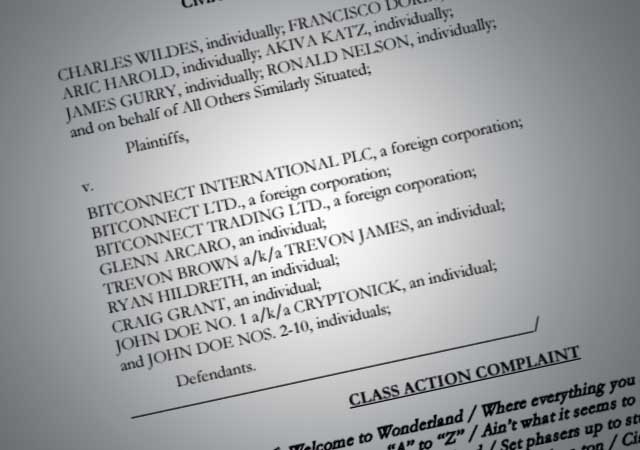 Here’s a snippet taken from the Class Action Complaint section of the above linked to document:

As the business’ closure in January 2018 revealed a Ponzi scheme, numerous securities laws violations, and thousands upon thousands of investors who lost [more than] 90 percent of their holdings.

Interestingly, the suit also names some of the promotional channels and affiliates associated with the company as defendants in the suit, suggesting that the investors aren’t just seeking compensation from the core company but also from those who sought to lure them in through their various methods of promotional activity.

There’s a good chance that this suit will pave the way for many like it given that while it is representative of more than $700,000 worth of losses across six investors, BitConnect Coin had a market capitalization of more than $2.5 billion at the time of its collapse.

Were you invested in BitConnect? Will you be seeking legal recompense? Let us know in the comments below.