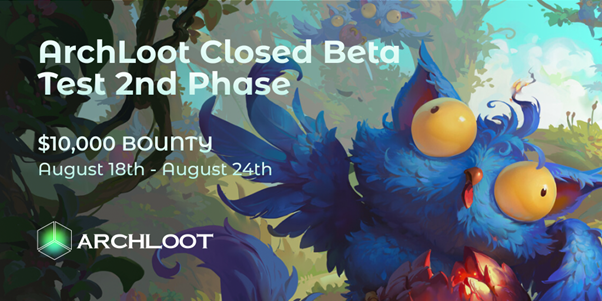 August 17th, 2022, Singapore – GameFi project ArchLoot has announced its plan for a second phase of the Closed Beta Test (hereinafter referred to as CBT) that allows invited users to try out an early version of its upcoming official game. Users are able to sign up for the beta program [APPLICATION] and get an immersive web3 gaming journey from August 18th, 12 PM UTC to August 24th, 12 PM UTC.

After several months of effort, the ArchLoot game has now amended bugs found in the first CBT and returns as the acclaimed intriguing RPG that provides true playability in the GameFi space. For the second phase, the game is not only providing enhanced gameplay smoothness and graphics, but is also ready to roll out brand new features like squads, hidden maps, 3v3 battles, and more.

For more engaging experiences and better test results, the program entails a series of incentive events to reward the gamers’ contributions in various forms. The prize pool is piled up to $10,000.

ArchLoot provides abundant rewards for defining and disclosing bugs in smart contracts and gameplay mechanisms. Every valid report gets at least $20 and discovering a major flaw can win up to $5,000 in total. All submissions will be carefully evaluated and vetted by both the game development team and the blockchain development team.

In addition to nailing technical flaws to smooth out and secure the game, the team also values the very personal perspective of the testers. As known to the community, all ArchLoot NFT body parts that can be used to assemble avatars fall into 4 rarity levels and vary in attributes and skill levels. The higher the rarity is, the more lethal and profitable the NFT will be. For gamers to comprehend the differences, the game will be airdropping rare body parts to those who provide meaningful feedback regarding the game.

Reap the Rewards for Winning and for Creations

Competitions can never be left out in a game. The savvy players who are able to occupy the  PVP leaderboard during CBT will be rewarded with the ArchLoot Governance Token ($ALT). Before the listing, the only way to earn $ALT will be to participate in events held by the official team.

Positioned as a UGC NFT game, ArchLoot not only gives the best level of freedom to gamers to design, adjust and enhance their NFT body parts, which even allows related metadata to be logged on-chain but also creates a gamer-first strategy to reward their creations. During the CBT, all participants can share and post related content online to win a prize. After the team reveal the shortlist of works, a community voting will be held to make the final decision of ranking.

Launched in 2022, ArchLoot is an NFT-based UGC game with loot-style composability and playability. Built on BNB Chain, it provides the first interactive gameplay in the industry, which fully enables on-chain implementation of upgradeable characters/props NFTs and unleashes its potential for playability and user-generated content robustness. The game intends to build an ecosystem, including a great game and a creative community, that truly achieves a balance between playability, accessibility, and profitability.

Gathering talents from the world’s leading gaming publisher, blockchain projects, and financial elites, the team now has 40 experienced members and is currently operating across continents. The project has been expanding its network of investors and collaborations, including Binance NFT, FBG Capital, Alphabet, and YGG SEA to keep fully funded operations and deliver milestone objectives.