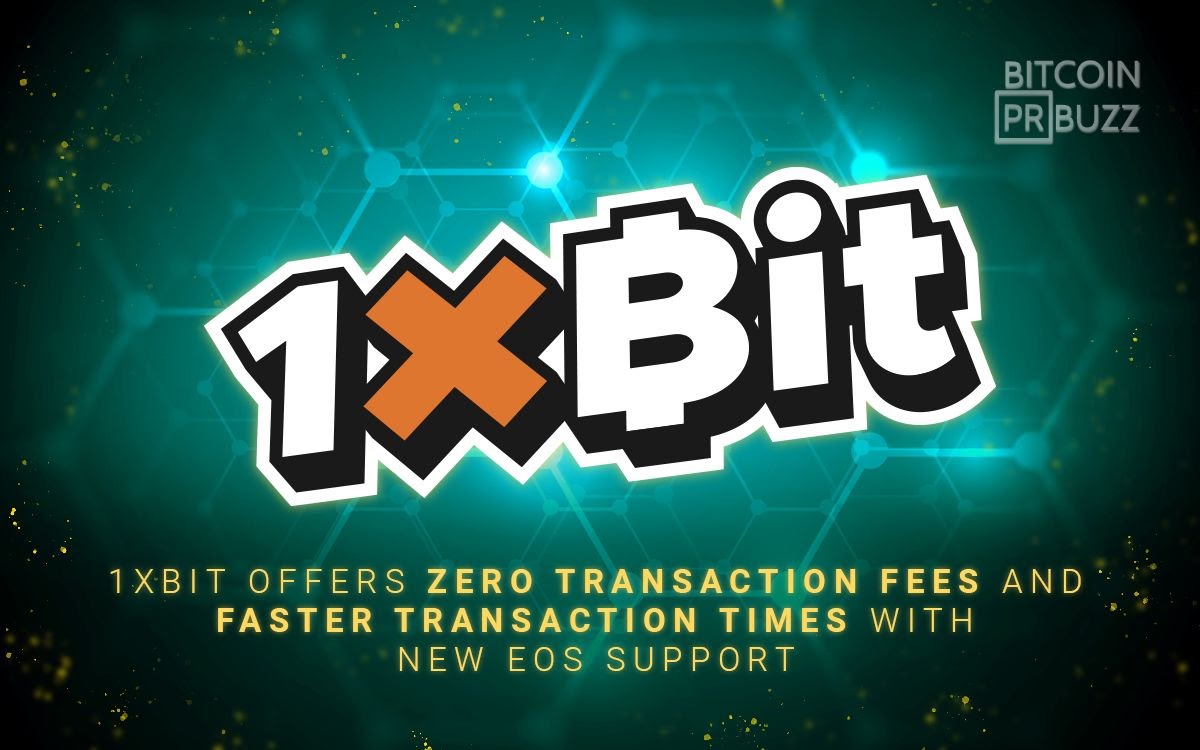 7th October 2020, Limassol, Cyprus – Leading cryptocurrency sportsbook and casino 1xBit has announced its support for EOS transactions, enabling its users to take advantage of the cheaper, faster transactions offered by the cryptocurrency. All 1xBit users will now be able to deposit and withdraw the (delegated-proof-of-stake) cryptocurrency on the betting platform.

With no transaction fees, and a blockchain capable of processing over 4000 transactions per second, 1xBit believes EOS will become a welcome addition to the already broad range of digital currencies supported by its growing brand.

Launched by Block.one CTO Daniel Larimer in 2017, EOS is a smart contract blockchain platform, and the second biggest platform used for designing fully decentralized applications (Dapps) today. EOS utilizes a Delegated-proof-of-Stake consensus mechanism, with the prime objective of delivering the fastest, cheapest, and most scalable smart contracts in the world.

So how does this affect crypto gamblers and general users of the cryptocurrency? Well, when compared to the similarly designed Ethereum, EOS can execute far more transactions and does not need gas for them to be completed. So it is both a cheaper and faster alternative to the ERC-20 token.

Widely known as the biggest competitor to Ethereum, EOS may not have as many everyday users, yet, but already boasts superior smart-contract execution numbers and gas-free transactions. So how do the cryptocurrencies stack up against each other where it really matters?

Scalability and cost are the two factors that the everyday user looks at when adopting a new digital currency. When it comes to scalability EOS certainly has the upper hand. ETH supports around 30 transactions per second, while EOS can execute 4,000. Ethereum co-founder Vitalik Buterin claims ETH 2.0 will process 100,000 transactions, but the launch is currently delayed until November 2020.

ETH’s issue in scalability has had a domino effect in regards to payments, with the 30 per second transaction limit often causing network congestion, resulting in sky-rocketing gas fees. December 2017 saw ETH gas fees shoot up to an average of $4 per transaction.

EOS does not use gas for transactions, however, EOS holders must proportionately share in the network bandwidth, processing power, and storage required to run the network, which requires some RAM from each user. EOS users do not pay any transaction or networking fees

1xBit sportsbook and casino are known for not only being a pioneer for the crypto betting industry but for the wider adoption of cryptocurrency in general, so it is no surprise that it has chosen to support EOS. 1xBit offers a comprehensive range of casino titles, a professional sportsbook, and always has new updates for games and promotions.

The industry-leading betting brand has translated its site into 60 different languages, adapted it for iOS and Android, offers cutting edge mobile developed titles, and boasts a sign-up bonus of up to 7 BTC.

1xBit allows users to make deposits and withdrawals in over 20 different cryptocurrencies, and now with the new EOS support, users will be able to take advantage of the free, rapid transactions to get their winnings faster than ever, and not lose a cent. Deposit EOS and start playing today.

Check out the official 1xBit blog for the latest articles – https://1xbit.com/blog/

Disclaimer: 1xBit is the source of this content. This Press Release is for informational purposes only. Virtual currency is not legal tender, is not backed by the government, and accounts and value balances are not subject to consumer protections. Cryptocurrencies and tokens are extremely volatile. There is no guarantee of a stable value, or of any value at all.