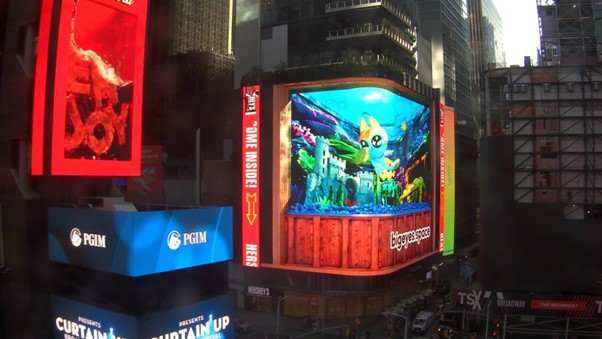 Marketing cryptocurrencies used to be a strictly online affair. Given that cryptocurrencies are digital by nature and the communities that have formed around them socialise primarily via social media networks, this was only logical.

However, 2022 has been a year where exciting new ground has been broken by cryptocurrency developers. It’s becoming increasingly common to notice advertisements for crypto coins and exchange platforms cropping up in very mainstream places – on the daily commute, broadcast between television programmes, or even on billboards at busy junctions.

Read on to find out how crypto coins are breaking into the mainstream with in-person advertising.

The first coin to note that has made an impact with a real-life stunt is Castello Coin (CAST). The brainchild of Niclas Castello, a German artist, this coin sought to leverage the presence of a physical artwork to cement its place in the cryptocurrency sphere.

This artwork, designed and commissioned by Castello himself, took the form of a cube of solid gold, displayed in New York City’s Central Park in February 2022.

The cube, resplendent in NYC’s bleak winter, turned many heads at its location in the city’s largest green space. Standing roughly knee-high, this block of precious metal was forged with roughly 400 pounds of 24-carat gold, meaning its approximate value exceeded $11M. No surprise, then, that the installation had its own private security detail to ensure no intrepid New Yorkers chipped some of the gold off for themselves.

While reactions to this stunt were mixed, with many locals finding it tasteless or downright annoying, it’s beyond question that it brought attention to Niclas Castello, and more importantly to his crypto project, Castello Coin (CAST).

The Algorand Foundation describes Algorand (ALGO) as a ‘Carbon-Negative Blockchain.’ These were the words that the Foundation paid to be lit up on a huge billboard in New York City’s Times Square.

Algorand (ALGO) is a decentralised blockchain that enables and empowers a variety of different functions and applications. The design focus of the blockchain is to surpass the transaction speed of major blockchains such as Ethereum (ETH).

Crucially, the Algorand (ALGO) team and its connected Foundation want the platform to help lessen the impact that cryptocurrency has on the world’s environment, by providing a more efficient and thereby greener blockchain process.

For added impact, the Algorand Foundation arranged for the rest of the electronic advertising billboards and digital screens in Times Square to be dimmed for the duration of their ‘takeover.’

This clever marketing stunt both brought increased exposure to the Algorand (ALGO) project and reinforced the philosophy underpinning the platform in one efficient move.

Taking things a step further, the Big Eyes development team have created a 3D animation that will make certain the whole of New York – and therefore the world – is aware of this new project, as well as its undeniably adorable mascot, Big Eyes the cat.

If you’d like to find out more about Big Eyes Coin (BIG) and how this junior coin has managed to pull off a stunt of this calibre, you can click the image below to watch a short video breaking down the project.