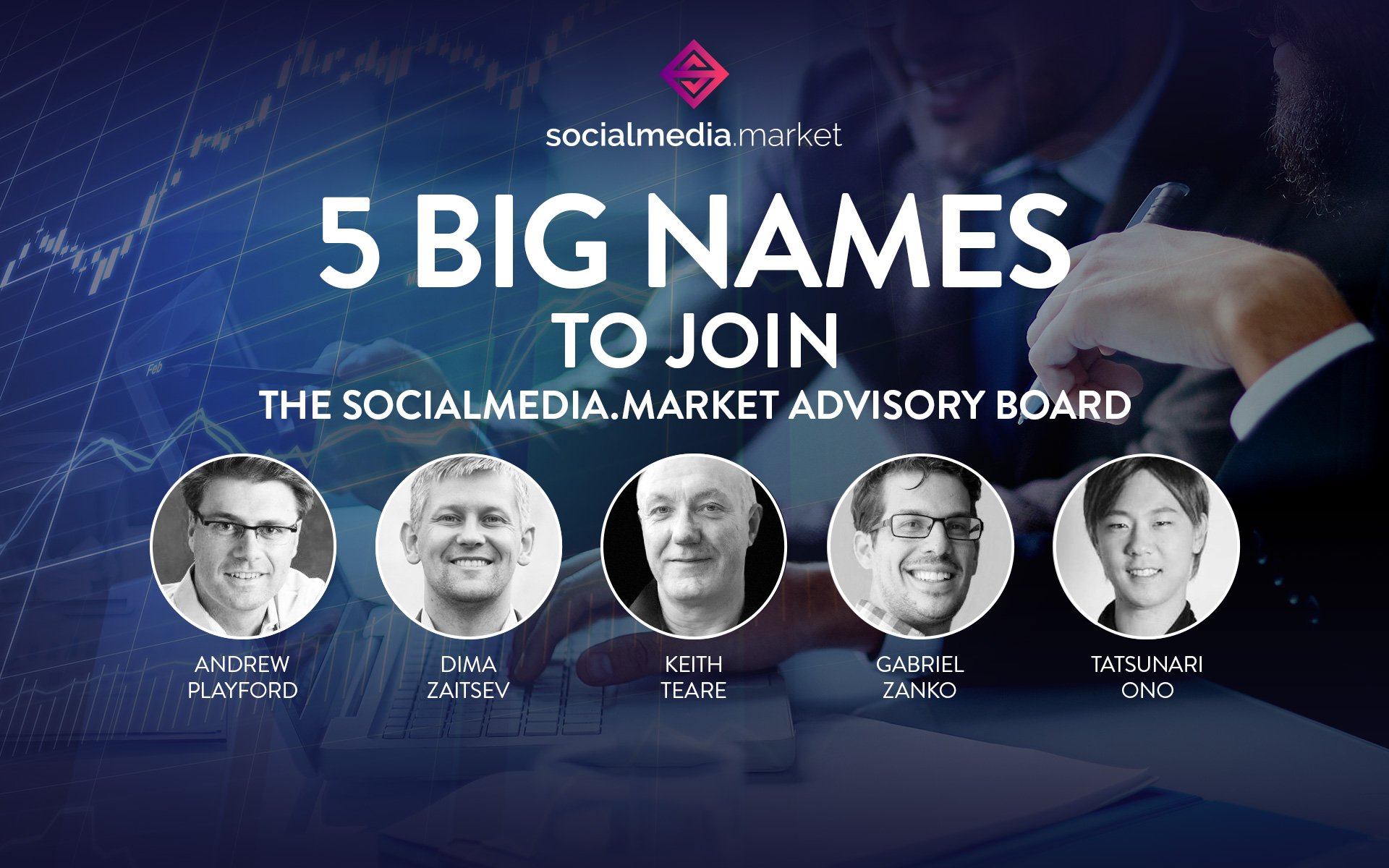 5 Big Names to Join the SocialMedia.Market Advisory Board

SocialMedia.Market, a decentralized influencer marketing platform, is happy to introduce new advisors who have recently joined the project. Keith Teare, Andrew Playford, Tatsunari Ono, Gabriel Zanko, and Dima Zaitsev, Ph.D. will be supporting SocialMedia.Market in its development, as well as in its upcoming ICO.

Keith Teare is an Executive Chair of UK venture company Accelerated Digital Ventures. He recently advised on the successful ICOs of ICOBox (4000 BTC) and Crypterium ($51M+). Previously he was a founder of TechCrunch and the first consumer Internet Service Provider in Europe – EasyNet. EasyNet and RealNames both achieved Unicorn status during the late 1990s.

Tatsunari Ono is the CEO of Value Brain Co., Ltd. (Japan) and the CEO of Beducate.ltd (Hong Kong). He is also the author of “Worries Make Money” Kadokawa Foresta. In December 2017, Tatsunari Ono made a speech to 2,500 guests at a cryptocurrency seminar where well-known speakers such as Jay Abraham, James Skinner, Anthony Mink were also on the same stage.

Gabriel Zanko is a fintech entrepreneur and advisor. He is the founder of MobileyourLife and is involved in the AI-Fintech space providing solutions in the B2B space. Gabriel is also an ICO advisory in Fundraising Capital and International Business Development.

Dima Zaitsev, Ph.D. is the head of International PR & Business Analytics Department and Chief at ICOBox. In 2017 Dima became interested in blockchain and cryptocurrencies and started conducting limited-scope market research. He has his own columns on several Media Outlets in the U.S. including FXStreet.com, CoinSpeaker.com, and others.

SocialMedia.Market is a solution for influencer marketing based on blockchain technology and smart contracts. It is designed to solve such pressing issues of the industry, as fraud, unclear pricing models, complex partnerships, and complicated transactions. At the current state, an influencer marketing campaign consumes lots of time and resources, making it hard for smaller brands and companies to benefit from the strategy. The SocialMedia.Market ultimate goal is to create an easy-to-use marketplace with an accessible community that unites influencers, advertisers, and brands in a completely transparent ecosystem. All operations within the SocialMedia.Market platform are executed via a utility token – Social Media Token (SMT)

The project has gathered 7 553 358 SMT – approximately 1 286.86 ETH and 17.67 BTC during the pre-ICO. The main phase is scheduled for February 9 and will last until March 16. The SocialMedia.Market beta is already live and available to explore.