A Few Lessons From Facebook On Blockchain Mass Adoption 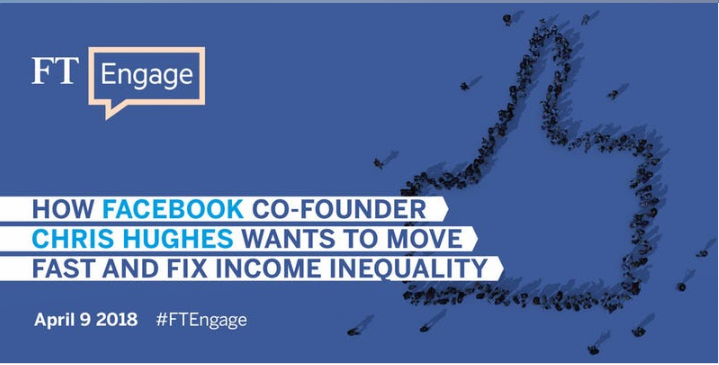 A Few Lessons From Facebook On Blockchain Mass Adoption

Chris Hughes became super wealthy thanks to his Facebook stock. Now, this entrepreneur from Silicon Valley wants to restore the middle class, and believes this can be done through his idea. His new book, Fair Shot, outlines a guaranteed income for the poor in the US.

“Most Americans cannot find $400 in the case of an emergency like a car accident or a hospitalisation, yet I was able to make half a billion dollars for three years of work. Something is profoundly wrong with our economy and in our country, and we have to fix it,” Hughes laments. Sounds credible?

Those in the media employs reputation management through the power of social media and this man intends to overturn bad publicity by getting the crowd’s good grace – through a presscon and a book. This event took place on April 2018 but we’re now on the last few months of 2018.

Whatever the long term results of this social media ploy, there are a few lessons learned by those in the Blockchain space after the Facebook scandal and we listed a few of them here.

This is a difficult lesson for Facebook but one that can easily pave the way for others to take on the widening gap for centralized social apps. With increasing disquiet and distrust over the use, sale and loss of personal data, the intrusion of unwanted advertising, diminishing rewards for content creators and a changing landscape, the time is now right for blockchain-based social apps to challenge centralized social platforms such as Facebook, Instagram and Twitch.

This has led to over 100,000 content creators registering with Patreon in a bid to connect more with their fans and benefit from their patronage and tips. However, many patrons are unhappy with the financial burden being placed upon them.

With newcomer Howdoo about to launch, we might be about to see an exciting challenge to traditional social apps and also to Patreon.

Howdoo has been quietly executing its goal of delivering a unique social experience that combines the best of social media and blockchain without compromising on the user experience. The second lesson is that for Howdoo or any other blockchain social platform to take advantage of the current climate, it needs to scale fast and provide a unique user experience while appealing to the ever-changing demands of social media users.

Before it can challenge the incumbent centralised platforms comparison, Howdoo first needs to be benchmarked against its main blockchain competitors Mithril and Steemit: 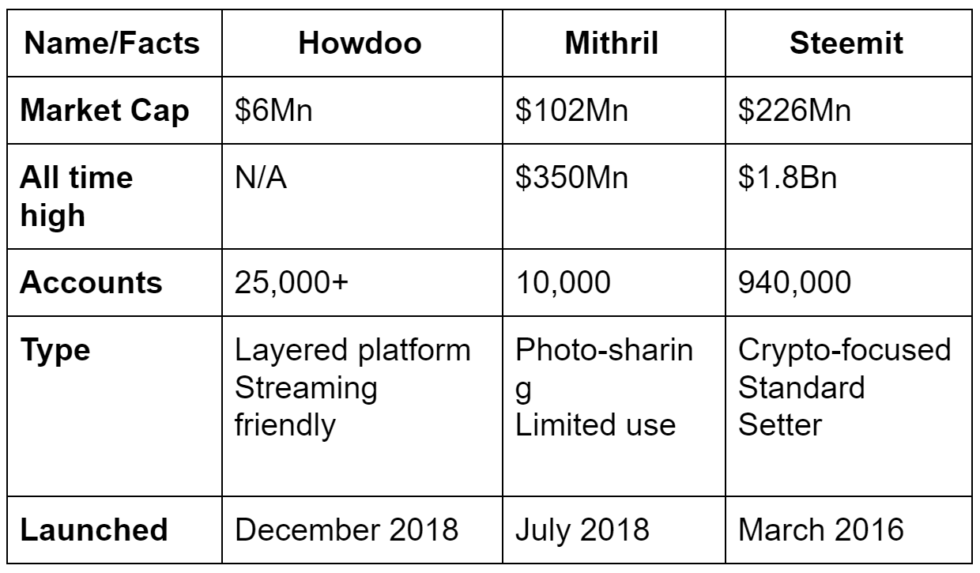 Like Mithril and Steemit, creators and anyone that engages with content on Howdoo will be able to earn udoos (the Howdoo token) for liking and sharing content while there will be a unique gamification layer that rewards users for regular usage and adds additional value to the platform

Furthermore, other unique features missing from both Steemit and Mithril are live streaming, tipping and paywalls. A user can tip or donate with a click of a button, with the content creator receiving 100% against 90% on Patreon. With Howdoo there are no service or processing fees.

For a project to keep abreast of other strong contenders for the same space, it must have its token on crypto exchanges. A lot of projects suffered because of this hindsight. Fortunately, Udoo is listed on several exchanges as well as Blockfolio, with the most volume being on Coinbene. With a current market cap of $6m and an improved platform and user experience, it can easily match and surpass Mithril.

This is a valuable lesson for the other projects to base their strategies on – keep your project going with validation through the crypto market. Since Howdoo offers something even more unique, it is not unrealistic to expect Howdoo to corner a large stake in a market currently being dominated by centralized social platforms.

Advertising is a key component of any social media platform with Facebook generating $6.18 to $26.76 per user each quarter. With $50 billion annually spent on digital, in-game goods, it is essential to have thriving, engaging and supportive communities that will attract advertisers.

While some have argued that “social apps on the blockchain cannot compete for contented subscribers and advertisers on incumbent centralized platforms” I have noticed that respected Musicians, Gamers and other high profile content creators across beauty, fitness, and lifestyle are signing up as supporters of Howdoo.

Last month, Howdoo announced that it was accepting username reservations. Over 25,000 users have already signed up for their usernames with more being added every day.

Content creators who act early should be able to register the usernames they desire before the platform’s public launch this December. Quickly following its December release, Howdoo will be launching its paywall, where content creators can start to sell premium content or monthly subscriptions.

“Something is profoundly wrong with our economy and in our country, and we have to fix it,” Hughes writes. True, but we on the blockchain space see the solution differently. As exponent of the blockchain, we are inclined to believe that as projects on the blockchain massively disrupt every sector of society, including the financial world, the fruits of labor will be distributed more evenly among those who labor.

[Disclaimer: This is is a guest post. The opinions expressed within are the author’s own observations on the direction social media is moving in, and the author claims to not own any token from any of the companies listed above.]