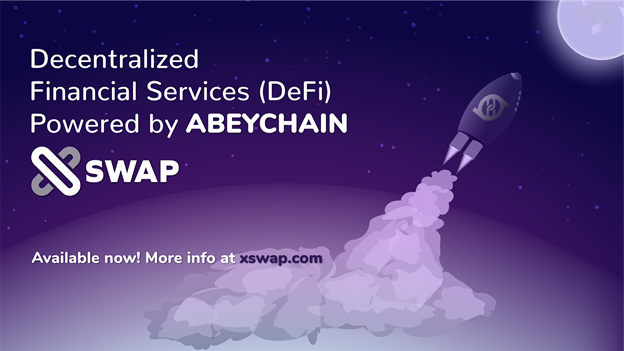 As DeFi continues to grow, the ABEY Foundation is launching XSWAP, making sure to keep a presence in the space as it continues to grow. XSWAP is decentralized exchange (DEX) and decentralized finance (DeFi) service and the first of many DApps on the ABEYCHAIN blockchain. XSWAP’s services fill gaps that have long gone ignored in the market. It provides traders a completely decentralized platform to trade without the need for a central intermediary. The XSWAP is the latest project to launch from the ABEY Foundation.

Built on the ABEYCHAIN blockchain, which leverages a hybrid consensus mechanism to provide a multi-layered, programmable blockchain, XSWAP has taken decentralization one step further with its new features. XSWAP’s launch on ABEYCHAIN’s blockchain gives its access to ABEYCHAIN’s growing user base of over 100,000 community members. An ecosystem that allows developers to leverage smart contracts and create DApps on a network that is significantly faster and cheaper than its most prominent rival, Ethereum.

A New Way To DeFi

XSWAP comes barreling into the market with never-before-seen features. Features that are poised to redefine the very way trades are carried out on decentralized exchanges. These include an automated liquidity protocol and an ‘automated market maker’ system. Both these features are neither operated nor controlled by a central intermediary, unlike its traditional, centralized exchange counterparts.

Automated market maker is a new and innovative feature created by XSWAP. It uses a proprietary mathematical algorithm run by the XSWAP protocol to determine the price of every token on the platform. The algorithm determines the price of a token using the supply and demand volume of that asset. An asset’s price will rise or fall based on the ratio of coins available in the token’s pool.

In addition to its unique features, XSWAP provides an extensive list of DeFi services for its users. Staking, lending, yield farming, and more are available to users on the XSWAP DeFi platform. Users can send digital assets to liquidity pools for various tokens to get an annual percentage yield (APY). While also reserving the right to pick which tokens their earnings will be paid in.

XSWAP supports a multi-chain, multi-wallet, XBridge, which provides inter-chain liquidity for ABEYCHAIN transactions, DApps, and services provided on the XSWAP platforms. All ARC-20 tokens are supported by XSWAP, along with multiple cross-chain assets, including Bitcoin, Ethereum, Litecoin, BNB, DOT, and AST. XSWAP also supports infrastructures such as non-custodial and open-source wallet services from the ABEY Wallet and MetaMask.

XT token is the governance token associated with XSWAP. The token facilitates transactions on the platform by serving as a way to pay transaction fees. Users will need to hold XT tokens to carry out trades on the XSWAP platform.

XSWAP’s token was first released via airdrop on August 17 to much anticipation from the market. The airdrop concluded in just four hours due to the high demand of the tokens. Due to this, more airdrops will be scheduled to take place soon to provide more supply to match this demand.

Users can also get XT tokens by participating in liquidity mining on the platform, where 1.2 billion XT tokens are planned to be released. XT tokens are currently available to trade on XSWAP.

To learn more about XSWAP visit the website https://xswap.com.