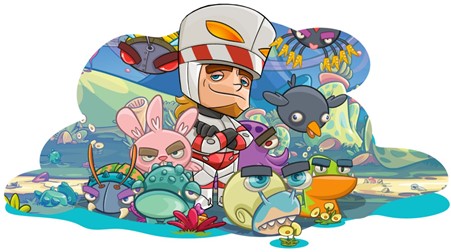 Action-Packed NFT Game Wonderman Nation Could Be Next Axie Infinity

Every day, it seems, a new play-to-earn project raises millions in capital, launches to considerable fanfare, or sets fresh transaction volume benchmarks. The booming gamified finance (gamefi) sector represents a valuable new use case for blockchain technology, and the most optimistic voices believe gamefi will steadily chip away at the near $200 billion global gaming market in the coming years. You’d be brave to bet on the momentum slowing anytime soon.

One upcoming release you’re likely to be hearing a lot more about is Wonderman Nation. The brainchild of a triple AAA team whose experience spans game development and film production, the title is built on Phantasma’s lightning-fast, carbon-negative blockchain, a network created expressly for gaming and NFTs. Developed based on the belief that gamers shouldn’t have to sacrifice user experience to enjoy blockchain-based games, Wonderman Nation offers compelling gameplay that combines elements of Axie Infinity, CryptoKitties, Pokémon and Final Fantasy.

The enigmatic Wonderman has crash-landed on a strange planet, one that’s teeming with many-hued Arcadian creatures possessed of unique properties and abilities. The goal? To feed and breed these quirky little characters, all of whom are tokenized as tradable NFTs.

Discovery is a major part of the gaming experience, with players compelled to explore in order to discover both food and NFTs representing vital parts of Wonderman’s downed spaceship. By reconstructing the craft, players can blast off into space and encounter over 100 different species of creature, which can in turn be interbred with those residing on the original planet.

Hybrid creatures not only generate genomic breeding royalties but possess qualities Arcadians could only dream of – giving them more resale value on the open market.

As with other gamefi projects, Wonderman Nation rewards players for their time and effort, as well as for their stimulative effect on the ecosystem via NFT trading. There is more to the release than breeding and trading, however: players can also compete in Final Fantasy-esque battles, participate in governance by holding WNDR tokens, and form teams to unlock new abilities and actions. While Team Wonderman has the stronger offense and a greater propensity to find ship part NFTs, Team Hometown is known for its superior defensive capabilities and penchant for locating food NFTs.

As in blockbuster games like World of Warcraft, tactical players can utilize the game’s vast environment for strategic, offensive and defensive purposes, with rewards waiting for the victors of various skirmishes. Those who hold a suite of valuable creature NFTs can also ‘stake’ them to earn yield, which in turn allows other players to rent the tokens for a share in the spoils. The better you perform, the more NKTR tokens you earn; and if you lose a battle with a rented NFT, you don’t pay any fees. Use cases for the NKTR token include breeding, buying spaceship parts, entering tournaments and renting creatures.

Like all promising gamefi projects, the intrepid team behind Wonderman Nation has been busy selling the dream to investors – and so far they’ve managed to attract a slew of them.

In private token sales, the project raised a seven-figure sum after winning investment from no fewer than 10 VCs, among them Shima Capital, Fomocraft Ventures, Jump Capital, Maven Capital, and Chainboost. Public sales are next up, with a trio of IDOs scheduled for April 21 (ChainBoost) and April 28 (Polkastarter, Blockius). These events will give the lifeblood of gamefi – players – the opportunity to get in on the ground floor.

The interest Wonderman Nation has generated so far is hardly surprising, particularly given the public’s seemingly insatiable appetite for play-to-earn. If the trailer is anything to go by, players can look forward to a humorous release that doesn’t take itself too seriously – yet builds on what has gone before. The era of Gamefi 2.0 is upon us, and gamers couldn’t be better placed to take advantage.