Bitcoin and the entire cryptocurrency market have been caught within bouts of sideways trading throughout the past few days and weeks.

The present lack of momentum has struck a blow to altcoins, as concerns regarding a potentially imminent downtrend have caused investors to flee from higher risk positions.

That being said, one analyst does seem to believe that a move lower is imminent, although this may result in a consolidation phase that comes before Bitcoin’s next intense rally.

Bitcoin Consolidates as Bulls and Bears Reach an Impasse

At the time of writing, Bitcoin is trading down just over 1% at its current price of $10,715. This is around the price at which it has been trading at for the past couple of days.

Ever since BTC was rejected at $11,200 last week, both sides have been unable to garner enough strength to create sustainable momentum.

As the consolidation phase narrows, however, it does indicate that an explosive move is nearing.

Here’s Where One Analyst Thinks BTC Will Trend Next

One trader explained in a recent blog post that a previously important support level is now acting as strong resistance – which favors bears.

“A pretty important level that used to be support, but is now acting as resistance which is a more bearish signal when it comes to reading just pure price action.”

The chart he references below indicates that he believes this resistance will cause BTC to plunge into the mid-$9,000 region before kicking off a prolonged consolidation phase. 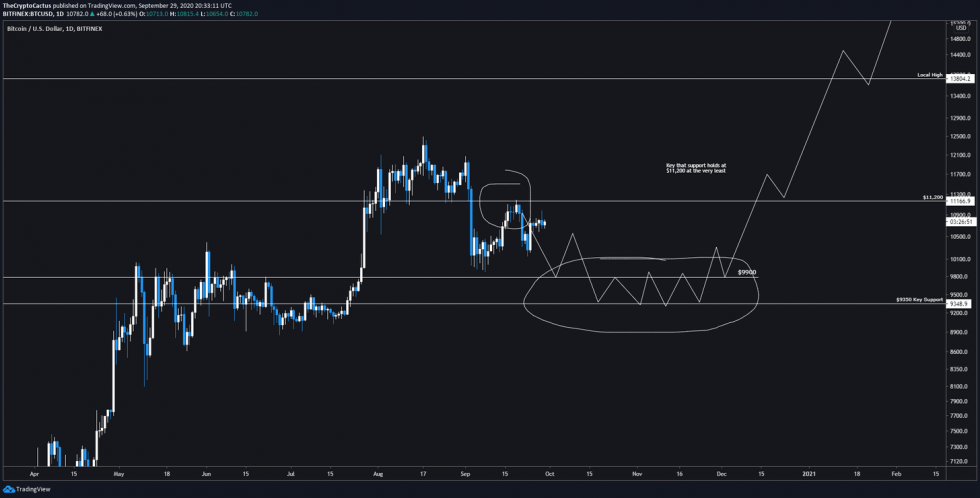 He does further add that holding above $10,500 is a positive sign in the near-term, but the lack of any potent support between $10,000 and this level suggests it may need to plunge lower before it can start its next strong uptrend.