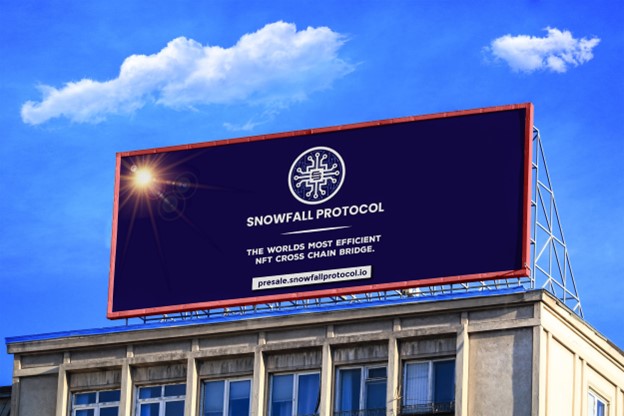 While major industry players like Bitcoin (BTC) and Ether (ETH) continue to fall in value, investors are now shifting their funds to projects that show colossal potential going forward and that are still strongly rooted amidst the ongoing bear conditions. Among the projects favored by movers dumping Ethereum (ETH) and Bitcoin (BTC) networks is Snowfall Protocol (SNW).

Snowfall Protocol is the first cross-chain transfer ecosystem designed to swap fungible and non-fungible assets between EVM and non-EVM compatible chains. Snowfall Protocol, which is still in the presale phase, has already demonstrated signs of challenging Bitcoin and Ethereum in the future. After a spectacular performance in November, Snowfall Protocol is set to pump even harder in December as investors continue flocking to the protocol. Other tokens to keep an eye on include ApeCoin (APE) and meme token Dogecoin (DOGE).

In the past week, ApeCoin’s market sentiment has climbed from the red turning bullish. At press time, the ApeCoin, an ERC-20 governance and utility token within the APE ecosystem, was trading at $3.95, up 2.2% in the last 24 hours and 31.99% in the last seven days.

This recent price performance by ApeCoin, which is expected to extend into the end of the year, can be attributed to Snag Solutions’ launch of the ApeCoin DAO marketplace. ApeCoin DAO marketplace is an NFT marketplace for users to buy and sell NFTs from the Yuga Labs ecosystem. Launched on November 24, the marketplace allows transactions of the BAYC, Mutant Ape Yacht Club, and Bored Ape Kennel Club NFT collections.

ApeCoin is also planning to launch APE staking on December 12. Investors should expect ApeCoin to soar further in the days leading up to this event. However, technical analysis reveals a volatile ApeCoin, making losses for short-term holders all but certain.

Once again, Dogecoin maxis are pumping their beloved meme token after the last rally corrected during the FTX fiasco. At the time of press, Dogecoin was trading at $0.09372, down 9.92% in the last 24 hours but up a solid 23.82% over the previous seven days. Dogecoin’s post-Black Friday surge comes as rumors of its integration into Twitter resurface and the launch of the DOGE-1 lunar satellite approaches.

Elon Musk announced the DOGE-1 Mission in 2021 as a mission to the moon paid for with Dogecoins. On integration, crypto influencer David Gokhshtein, through a Twitter post to his 700,000 followers hinted that Ethereum (ETH) co-founder Vitalik Buterin would soon be collaborating with Mr. Musk to improve Dogecoin ahead of its integration, most likely as a means of payment in Twitter.

However, these rumors are just that—rumors. And probably another pump-and-dump scheme by a whale looking to make unwary investors his exit liquidity.

Snowfall Protocol (SNW) has closed November on a high after extending its success into the last weekend with a spectacular 650% price uptick. The price of Snowfall (SNW) is now holding steady at $0.075 with the Stage 2 selling out one day early! This represents remarkable growth since the first stage of the presale campaign when the price of SNW was just $0.005.

The latest price increase for Snowfall Protocol results from Snowfall’s alluring Black Friday deals (now expired) and the influx of new investors before yet another significant price mover, KYC audits. However, the KYC audit is not the only important event for Snowfall Protocol (SNW) in December. Other events that will further boost the price of Snowfall to the moon include the release of dApp and wallet features, SNW staking, and SNW-holders’ benefits.

The third stage of the presale campaign for Snowfall Token (SNW) will begin with an additional 150% price increase to $0.075. Snowfall Protocol is set to officially launch on January 3, 2023, making now an excellent time to purchase SNW at a discount. Moreover, Snowfall gives you a 20% referral bonus this holiday when your family or friends join the presale using your referral link.

To learn more about Snowfall Protocol: