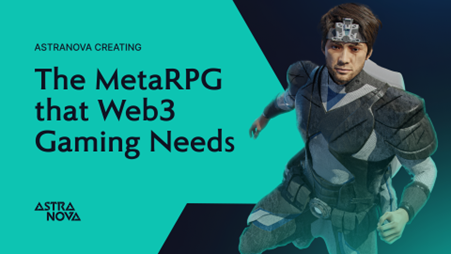 Blockchain gaming is still in its infancy, yes, but the quality of games that integrate with web3 are, so far, rudimentary. It’s understandable, synthesising decentralised technology with the hyper-strenuous act of coding a video game is no mean feat. It’s no wonder early movers in the space are still getting to grips producing fantastic gaming experiences.

Yet for other projects, it’s perhaps for a lack of trying. Focused exclusively on their utility and tokenomics, some blockchain games stop being a game at all. Click the buttons, get the tokens, trade the tokens, move on. Perhaps they are merely DeFi in game’s clothing. Or ‘RPGs’ where the only real progression that can be made is by spending money on NFTs. That’s not a game, that’s an addiction.

Astra Nova is doing it differently. Its MetaRPG will be an RPG: It will tell beautiful stories, let players fight mobs, and each other, in action-packed real-time combat, and provide a sprawling, immersive world for players to get lost in. It will let players progress through gameplay, and acquire value through their actions. And the meta part? That will be its blockchain architecture, the fact that using the technology will allow players to begin owning part of the game world they contribute so much to, and earning real-world, transferable value that can be used throughout the metaverse and beyond.

Digital ownership is what makes the next generation of MMORPGs so exciting. Horror stories of players losing access to their gaming account when it’s provided by a centralised service abound. Tens of thousands of hours of love, work, and craft evaporated at the click of a corporate button. Even if they did let you back in, you never owned any of it in the first place. In web2, you pay for access, in web3, you pay for ownership. Rent versus buy. Expense versus asset.

Applying that to the innate feeling of collection and growth that comes with an MMORPG makes for a heady mix. Suddenly, that Thunderous Sword of Azar is worth something real. As stories of its deeds mount up over the years, about the legendary events it was a part of, the clutch raid boss finales, the tournament duels, so its value will increase. The same for every item in the game. It’s not just its power level, or what it grants you, it’s also its history. All of it is inscribed forever on the blockchain.

The Trinity of the MetaRPG: Story, Gameplay, Web3

Astra Nova knows this. What the blockchain gaming industry needs is a truly fantastic game that allows all the potential inherent in the blockchain to manifest. Astra Nova’s MetaRPG is set to the backdrop of cosmic war, the players jettisoned on the liferaft fashioned by the ancient Gods of order, a final attempt to stave off total annihilation from the all consuming Accretion.

An Open World MMO on the Blockchain

The Astra Nova world will be vast, populated by friendly NPCs, dungeon-lurking enemies, and Deviants – Astra Nova’s first in-game NFT. Fully rendered in stunning 3D, and looking very much like the traditional MMORPG you might expect to play on legacy gaming interfaces, the world of Astra Nova will come to life for the players as they seek to rebuild civilisation under the light of their new star.

The combat wil take place in real-time and will emulate the great action-RPGs like Witcher, Zelda, and more. As players roam the world, either alone or in teams, they will quickly rumble with passing enemies who may attack them at a moments notice, perhaps under the spell of a nearby Deviant, lurking in the shadows. In general gameplay, the world will be akin to the classic World of Warcraft MMO, with players wandering from place to place to seek out new quests and discover more about Astra Nova and the beings that reside within it.

A Story That Changes With the Players

Regular story updates from the team will actively affect the world. The story of Astra Nova is one of cosmic proportions, and as the battle between dark and light rages, so will the five worlds that orbit Astra Nova, each an amphitheatre for the desires of gods and monsters. Players will explore the five worlds, and play as one of the 15 races that inhabit them. As the trials of the endtimes continue, and the story progresses from month to month through player-led events and tournaments, the five worlds will morph, change, succeed, and fail, rise and fall.

Blockchain gaming must, first and foremost, be a great game. It must have a great story, have interesting mechanics and gameplay loops, and be fun to play. Web3 integration with these gaming experiences has the opportunity to expand the horizon of experience even further. With the benefits of digital ownership and permissionless access to a game world, games can truly take on a life of their own. Rather than the players being spoon fed by the creator, instead they come together to choose the path for their new world, their new star. Astra Nova has that vision, and will be a final light in the dark that players far and wide will choose to call their home.