Altcoin mining has gained huge popularity over the past year as people use high-end GPUs to secure networks, and major computer part makers are taking notice, developing products for this emerging market. Now a manufacturer has released a motherboard that can support 20 GPUs.

ASUS announced the H370 Mining Master earlier this week, boasting the ability to support a whopping 20 graphics cards. This motherboard is specifically built for cryptocurrency miners, and the design was done in a way that allows for much more efficient connectivity by letting USB riser cables plug directly into the PCB ports rather than PCIe. This motherboard aims to make maintenance on fickle GPU mining rigs much easier, as the company stated that this new format is much better than adding GPUs via PCIe. This motherboard also has drastic improvements to diagnostics, an essential tool for miners.

The mining industry already has a razor-thin profit margin, and if your cards aren’t hashing what they’re supposed to be hashing, you’re losing money. High uptime is one of the top concerns for all miners.

Ever since the initial big altcoin boom in early/ mid-2017, GPU shortages have been commonplace for most popular online retailers. As manufacturers struggle to keep up with demand, GPU prices have risen hundreds of dollars for top-of-the-line hardware. Gamers have been outraged as well, as they’ve been unable to get the components needed for the latest, and most graphics-intensive, games at reasonable prices. 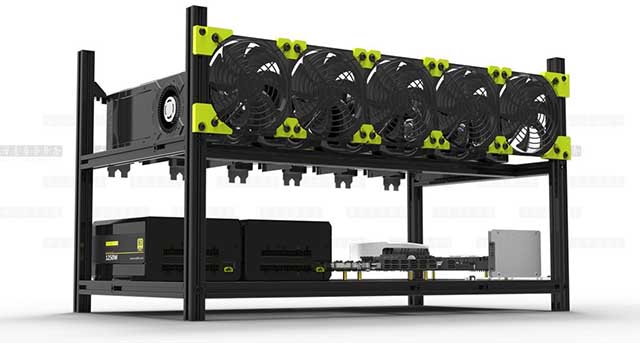 Along with the price gouging, however, cryptocurrency mining has opened a huge potential market for existing hardware manufacturers. Rumor has it that NVIDIA and AMD are working to build their own cryptocurrency mining ASICs to compete with current Bitcoin mining companies. The addition of two major tech giants would definitely provide some much-needed market competition.

Are you mining any coins on your home PC? Are you interested in a motherboard that supports a whopping 20 GPUs? Let us know in the comments below!