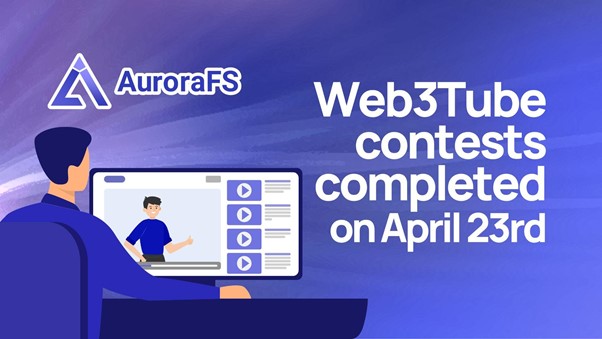 Web3Tube is an AuroraFS development empowering video content creators, while simultaneously displaying the ability of the AuroraFS decentralized content distribution network for future AUFS clients with significant data storage and distribution requirements. Web3Tube contest participants were tasked to download AuroraFS decentralized application, Web3Tube DApp, and then upload videos to compete in two different activity types which are used to determine winners and ranking.

Content creators uploaded videos with the intent to share with others existing on the network platform, and additionally to add new users from their own networks. This system encouraged organic volume to be added to the AuroraFS decentralized user base in this still pre-mainnet launch, while content creators were also rewarded in the process. The two contests for new subscribers and likes officially ended on April 23rd, and winners will be airdropped rewards in AUFS in early May.

A new contest was also added as a part of the AuroraFS latest news and updates. The AuroraFS team has introduced a new metric they have coined, flow energy. Flow energy is affected by the amount of time a node spends watching videos on the Web3Tube platform. The more view time a node is engaged in, the greater the flow energy value of that node. The campaign is geared to increase play on the network through incentivizing users to play videos as part of the rewards structure. In this way, creators and non-creators who are on the network mostly for entertainment and to find content relevant to their interests are all being rewarded. The warm-up period to begin measuring the flow energy was April 18-22.

Flow energy has been used to measure for campaign rewards since the campaign launched on April 22nd. The newest campaign for AuroraFS will continue until the team announces only 3 days remaining. Essentially the campaign will be ongoing for an undisclosed amount of time for now. This gives participants a good amount of time to earn rewards based on the newly-incentivized metric. The top 500 winners will each win up to 5 AUFS future airdropped tokens each named round for as long as the contest runs.

Other updates on AuroraFS contests

A non-staking mining competition was also ongoing as a part of the AuroraFS Web3Tube and decentralized network sneak preview to the public forum. The final round of the AuroraFS broadband mining competition was increased from 100 to rewards for the top 200 mining participants, before closing. The unit of measure used to calculate the total bandwidth dedicated by any given node, is called a “cheque”. The more ‘cheques’ for any given node on the AuroraFS, the more AUFS airdropped tokens it will be rewarded. A total of 1,000 AUFS were designated for airdrops to be sent out to miners for performing network actions on the filesystem network.

Broadband mining is the incentive-based system the AuroraFS utilizes to implement the global broadband data resource pool. This global pool is what commercial clients gain access to in order to support Web 3.0 content storage and data distribution requirements needed for highly efficient processing of DApps built and powered on AuroraFS. AuroraFS is built to handle the most extensive data needs. Metaverse processes, video distribution, decentralized social applications, media and other apps can be supported seamlessly on the expansive AuroraFS p2p content network.

Final points and next steps for AuroraFS

With each contest, contest updates, and new contest announced, the AuroraFS team grows closer to its mainnet launch set to take place some time in the upcoming Q3. Activity-based contests and adoption competitions have so far proven to allow more organic use of the AuroraFS content storage and distribution network.

Specifically, the team is hopeful about the further adoption of the Web3Tube decentralized video content distribution platform. Creators will have power to charge varying amounts of cryptocurrency based on their own standards, and in this way, take control of their own content creation and monetization processes to a large degree, through the AuroraFS development. Web3Tube updates, news, and general AuroraFS updates can all be followed on relevant social media channels and the group’s community Telegram channel.