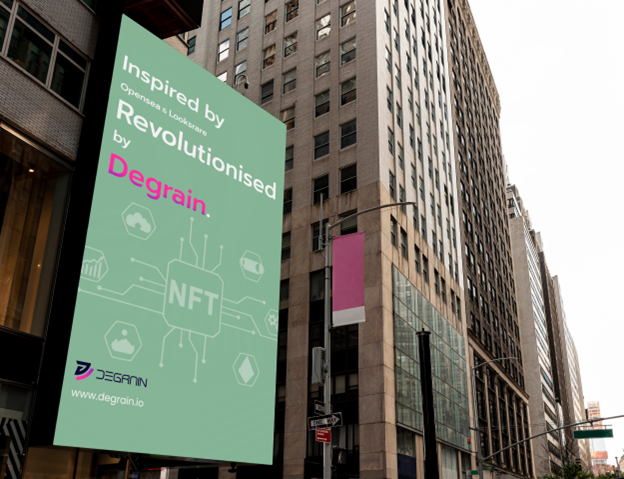 The innovative concepts that gave birth to Axie Infinity (AXS) and Helium (HNT) have made them successful cryptocurrencies. These cryptos could eventually perform better, but the new token Degrain (DGRN), inspired by a concept that will likely fundamentally alter the cryptocurrency and NFT industries, is the main subject of this article. We will analyze how Degrain is likely to overtake Axie and Helium in 2023.

Axie Infinity (AXS) is facing a slippery road ahead

Blockchain-based commerce and NFT game, Axie Infinity (AXS) are run and partly owned by their users. In Axie Infinity, players can gather, breed, grow, combat and trade token-based animals known as Axies. Well-known franchises like Pokémon and Tamagotchi inspired the game. Each Axie is a non-fungible token (NFT) with unique abilities and capabilities. With Axie Infinity (AXS) you can employ them in 3v3 combat, with the winning team receiving extra experience points that can be applied to body part evolution or start leveling. Axie Infinity (AXS) current live price is USD 14.81 at the time of writing, while  its 24-hour trading volume is USD 173,077,755.

For Internet of Things (IoT) devices, there is a decentralized blockchain network called Helium (HNT). The Helium manner, introduced in July 2019, enables data transmission and communication between low power wireless devices over its node-based network. Nodes are “Hotspots,” a hybrid of a wireless gateway and blockchain mining hardware. The native cryptocurrency of Helium (HNT), is HNT which is mined by users who run nodes. Since its birth in 2013, Helium (HNT) has been focusing on identifying shortcomings in the current infrastructure and preparing IoT communication for the future.

Degrain is a world’s first new concept, an NFT cross-chain marketplace that rewards its holders, users and stakers for engaging on its platform. Degrain is launching a unique idea, imagine wanting to buy an NFT with BNB but the seller has listed that NFT for sale on Ethereum. With Degrain (DGRN), it’s made possible by their AI smart contract which allows payments for NFT’s in multiple cryptocurrencies.

Users that buy, sell, trade or fractionally invest in an NFT on their marketplace will earn Degrain’s native currency, DGRN tokens. The company will be distributing 100% of trading fees to stakers allowing investors to earn a passive income of around 18% per year. Creators will also receive all royalty payments at the point of sale. Users that purchase during presale will also receive 100% off trading fees for life and priority to a variety of rewards.

Presale Phase One went live on 7th July at the price of $0.01, investors are able to swoop up an extra 30% bonus for being one of the early investors into the project. The project which is now in presale accepts twenty well known crypto currencies as payment for DGRN tokens. Phase One is due to end on the 8th August and top crypto analysts have predicted a 5,000% gain before Phase Two of the presale concludes on September 30th. Degrain could change the way we buy and sell NFT’s and with their sophisticated concept, it’s no wonder some top crypto analysts have tipped Degrain to be the next 1,000x investment. You can enter the Degrain presale below.