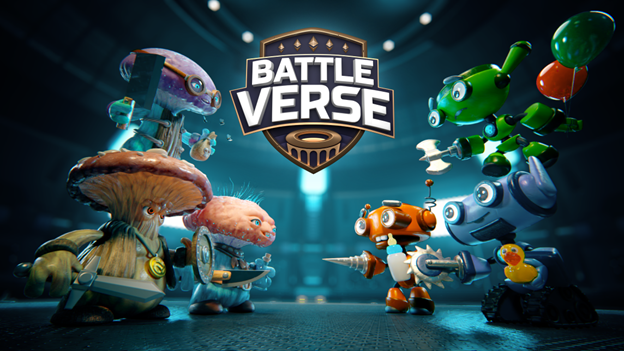 BattleVerse announces $5,000 BVC giveaway for its private sale and IGO

by Bitcoinist
in Press releases
10

BattleVerse, a free P2E online game powered by DeFi x NFT announced a $5,000 giveaway in its native token $BVS during its private sale of Seedify. The BattleVerse IGO will take place on Seedify’s launchpad on the 17th of February. To celebrate this IGO they’re giving away $5000 worth of BVC. The major purpose is to provide users with the option to earn game tokens while having fun, especially if they are new to the world of Play-to-Earn (P2E) games. Every action a player takes in the vast game environment, whether it’s a battle, resource extraction, or fulfilling objectives and tasks, generates money. Apart from Seedify, BVS is confirmed to launch on Enjinestarter, Equinox, BullPerks, Gamestation and 0xbull.

The BattleVerse story began in the second quarter of 2021 when a group of enthusiastic people had the idea to create a unique, fun, and interesting world populated by many races trading and fighting with one another, competing in exciting tournaments, and singing songs over a campfire (they say that this is the tradition that still preserves Baby Combats Bots, although humanity itself died out centuries ago). And by the middle of last year, the core concept and initial notions of the first race, which debuted in BattleVerse, had already been defined. The play to earn metaverse game is aiming to make 2022 its own year with a slew of developments and partnerships, some of the key milestones include

The ability to engage with other players and participate in various gaming activities across different blockchains is a unique feature of the BattleVerse! All gamers, regardless of which blockchain their digital asset originated on, will be able to move any gaming asset to another blockchain. Because of the rapid growth of blockchain technology and the ongoing introduction of new protocols, the BattleVerse Metaverse must be scalable in order to interact with any protocols and blockchain platforms. The fundamental technological concept is to build a gateway that can transport data from one system, protocol, or platform to another. Based on private decentralized technologies, this gateway will operate in an automated fashion.

What makes Battleverse the potential Gamefi metaverse of Web 3.0?

The basis of the game is the BEP20 platform, which houses the game’s basic decentralized technology. Copies (phantoms) of game items (heroes, cards, project tokens, etc.) are formed on other platforms (at the first level – ERC20 and Polygon, at the second stage – other protocols). There is a basic service (gateway) operating in a closed (private) infrastructure that polls the connected platforms at a predetermined interval of time, such as once per second, and records the presence of each player’s game assets on all protocols in the game’s basic blockchain.

Initially, all game assets are created in the basic blockchain protocol BEP20 and placed in the system wallet, then the service (gateway) reads update transactions and places (creates) full copies of what was created on the basic protocol in system wallets on other platforms.

Combat is started with a specified address on the fundamental blockchain protocol BEP20. This is the address where users send their Battle Fundings. Within the boundary of any supported protocol, battle funding can be placed. The gateway, which tracks transactions in supported protocols, commits a transaction on behalf of the system, stating the address of the player who provided the Battle Funding, in the case that transactions are made to the battle’s target address. The system performs a transaction to fix the outcome in the basic BEP20 protocol after receiving the combat result, and the gateway distributes the profits among the players in the protocols in which they participate.

BattleVerse is a huge gaming universe inhabited by a wide variety of races with their own unique characteristics. The BattleVerse project began with a desire to create a collectible NFT game that was open, transparent, and community-governed. The BattleVerse Council is the method via which the community of $BVC holders will regulate and maintain the protocol, as well as the types of improvements that can be suggested.

Holders of $BVC can nominate a candidate for a council seat and delegate their vote to a nomination in order to elect council members. Candidates for council members must be proposed before the event’s deadline, and a formal voting period must follow. After that, the mvDAO will compile all of the suggested members from the BattleVerse Voting Channel and determine the results. This technique will be used to eliminate plutocracy by reducing the voting power of large $BVC holders. This approach has been successfully implemented in a variety of other protocols, including Grants.

The new governance structure is divided into two primary components: The BattleVerse Council will be made up of nominees who will be voted in by $BVC token holders, allowing community representatives to discuss and distill technical improvements while also ensuring that major $BVC holders do not have disproportionate voting power in the result of proposals.

Meta-Governance. Changes to the $BVC council will be necessary for some circumstances. Any suggestions for meta-governance must be decided by a majority vote.