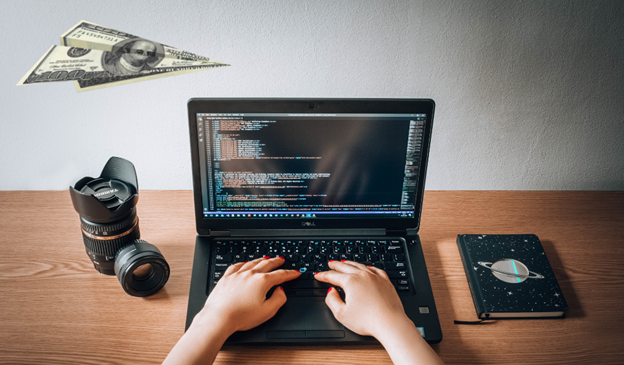 Best Ways To Make Money As A Web3 Developer

If you’re looking to get rich from blockchain and crypto but don’t want to invest your hard-earned savings, perhaps there’s an opportunity in putting your equally hard-earned programming skills to use. These days, there’s huge demand for blockchain developers who are capable of building next-generation applications that will power the internet of the future – otherwise known as Web3.

Blockchain and Web3 technologies have emerged as an extremely promising solution for some of the biggest problems in the enterprise today, with use cases around decentralized finance, supply chain logistics and more. Indeed, the latest research suggests the global blockchain solutions market could be worth as much as $15.9 billion by the end of 2023, up from just $2.7 billion in 2019.

With so much money being poured into enterprise blockchain projects, the demand for developers with the skills to bring those ideas to live is rapidly rising. What’s more, because blockchain developers are few and far between, they can earn a lot of money. Indeed, a quick check on the website Glassdoor shows that the average blockchain developer in the U.S. earns an annual salary of $101,661, with some of the very best stretching that to as much as $165,000 per annum. Even the worst paid blockchain developers can take home more than $60,000 per year.

The Web3 developer’s role is well paid because it involves complex work, designing and developing a multitude of applications and solutions built on blockchain technology, and very few people in the world are capable of doing so. In general, blockchain developers are responsible for the development and optimization of protocols. They’re also tasked with defining the structure of a blockchain system and smart contract creation, as well as designing the applications that make use of them.

How To Become A Web3 Developer

Basic coding skills are essential, so that will be the first port of call. Assuming you have no skills whatsoever, it would be a smart move to learn the basics, such as a programming language like C++ or JavaScript. These are both good choices because they serve as the foundation for smart contract programming languages such as Solidity.

Once you have a basic grasp of programming it’s important to get to know the basics of blockchain development. Not only should you familiarize yourself with what blockchain is and what’s it’s used for, but also some blockchain programming basics. A good place to start might be Udacity’s basic course, which provides a basic overview of blockchain’s architecture and fundamentals, and dApp development using smart contracts and oracles.

Armed with this foundation of knowledge you’ll then be in a position to learn more and specialize in a particular area of Web3 development. Specializing is important, as it will allow you to gain more experience and competency, which is the key to making a higher salary.

For many Web3 developers, specializing in Ethereum is a no-brainer considering that it remains by far and away the most popular blockchain platform of all. The vast majority of Web3 apps, metaverses and crypto tokens are based on Ethereum, and despite its scaling problems that’s likely to remain the case for some time to come. So learning Ethereum and Solidity, its smart contract language, can serve as the foundation for a long and rewarding career in dApp development.

As mentioned, Solidity is a good starting point because of its similarity to C++ and JavaScript, though it will take some time to get to grips with. Luckily, the Ethereum Foundation provides a wealth of developer resources on its website, with multiple docs that elaborate on its core concepts and an array of video-based tutorials. Once you’re confident enough to get started, Ethereum’s site even allows you to get started using a test development environment, where you can create your first dApp.

Another good option is to learn how to code for Solana, which is often referred to as an “Ethereum killer” thanks to its fast transaction speeds and low-cost infrastructure. Solana’s DeFi ecosystem has emerged as one of the biggest in the crypto industry and it’s crying out for developers. There’s a multitude of learning materials available on Solana’s website, with developers able to choose between building dApps or else working to improve Solana’s codebase.

Ethereum and Solana are among the two largest blockchains in terms of their developer communities, and what’s more they’re growing rapidly too. A recent study by Messari shows rapid, year-over-year growth in the number of developer contributions to each project, and that growth is unlikely to slow down anytime soon: 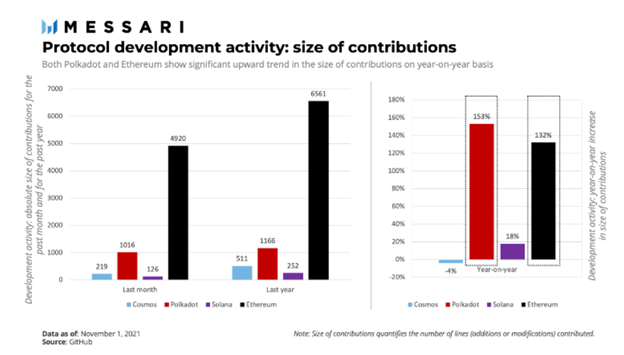 More ambitious developers may want to take an alternative route as they carve out their Web3 development career, specializing in a project with much bigger potential for growth. In an interview with Decrypt, Fantom Foundation CEO Michael Kong stated that the blockchain industry is extremely competitive, with anything from 20 to 30 networks all vying to become the next Ethereum. Kong said this is a good thing because it will result in more innovation and better technology. Ultimately though, he believes there will only be five or six winners.

“I think in the future, you might not have 20 or 30 different chains… but I think you’ll have a few chains out there, and I think they will get a large market share,” Kong said. “People use multiple different blockchains, that’s the case today, and I think that will continue to be the case into the future.”

If Kong is right it means that there is a huge opportunity for developers who choose the right alternative blockchain. That means looking at only the worthiest of contenders, and few are more compelling than the Tezos blockchain.

Tezos is extremely scalable and has been widely recognized as one of the most energy-efficient alternatives to proof-of-work blockchains like Bitcoin and Ethereum. This is key because sustainability is a key concern for enterprises today, which are looking to reduce their carbon emissions any which way they can. When they shift their applications to blockchain and Web3, they’re likely to want to use an environmentally-friendly network and Tezos certainly fits the bill.

Tezos relies on a novel Liquid proof-of-stake consensus mechanism that allows it to validate transactions rapidly with low fees and minimal energy consumption. The blockchain can store functions that replicate a vast range of services that, when linked to a web interface, become Web3 dApps. Tezos is also known for its open, streamlined on-chain governance, where the community gets to vote on all key decisions regarding its future. It has a small but growing ecosystem of dApps, including various NFT marketplaces, DeFi apps, play-to-earn games and others. There are some notable heavyweights invested in Tezos, such as Switzerland’s Inacta, Crypto Finance AG and InCore Bank, as well as the real estate firm Elevated Returns, software firm UbiSoft, and other big names like Red Bull Racing Honda, Groupe Casino and Société Générale.

Given how new it is and the interest it has attracted from major enterprises, it’s no surprise that Tezos is crying out for new developers. Luckily, Tezos provides a ton of useful online resources that minimize the learning curve, with a selection of tutorials for learning Archetype, its smart contract language, LIGO, an alternative smart contract language also used by Tezos, and  SmartPy, which is a framework for building Tezos smart contracts with Python.

An Alternative Path on the Ethereum Network

For those developers who believe in the future of Ethereum, a second alternative could be to specialize in a so-called Layer-2 solution that intends to scale the world’s most popular decentralized network. With Ethereum creaking under the strain of so many transactions, most dApp builders have embraced the idea of Layer-2 solutions that offloaded transactions to sidechains, where more can be processed in bulk without congesting the main network.

One of the most interesting Layer-2 solutions to emerge is Boba Network, which is an optimistic rollup on Ethereum that enables faster transactions for DeFi applications with lower gas fees. Boba Network is a relatively new scaling solution that only launched in August 2021, with the aim being to increase Ethereum’s throughput while reducing fees and compute resources.

Boba does this through optimistic rollups, a technique that assumes transactions are valid unless challenged. It ensures transactions are processed extremely rapidly, while providing a way for any of them to be challenged and verified or rejected when required. One of Boba’s greatest capabilities, and the reason for its potential, is its NFT-bridging functionality, which makes it possible to mint, move and sell NFTs across Layer-1 and Layer-2 solutions. This makes NFT development easier for developers in the GameFi industry, which is one of the fastest-growing applications of blockchain today.

Boba Network provides a wealth of developer resources for those looking to get started either building on, or improving its infrastructure. Developers can explore Boba’s documentation on GitHub, or else check out its extremely busy Discord and Telegram channels for more information and to get their questions answered.

The Future Of Programming Is Web3

As we’ve learned, the demand for Web3 developers is going through the roof and it’s only likely to increase as the shift towards a decentralized internet infrastructure accelerates. Web3 and blockchain are the future of the internet and anyone who possesses the skills to build it will surely be able to command a very high salary, especially if they have some kind of blockchain specialization.

What’s more, the space is so young that it doesn’t necessarily matter which area you choose to specialize in. Fact is, if you have Web3 development skills, you’re going to be one of a very elite bunch of programmers who’re capable of helping the world’s largest companies build their next generation of apps. Whatever blockchain skills you decide to learn, they’re going prove to be extremely beneficial both for your bank balance and the rapidly growing audience of Web3 users.