After stubbornly resisting a $3000 price point for weeks, Bitcoin has managed to effortlessly sail towards its latest $4000 all-time high in a matter days following it’s breakout last week.

It’s a bullish time for Bitcoin. Investors were exuberant last week as Bitcoin finally broke its infamous $3000 price point. Now the bulls are out of the pen, and Bitcoin prices continue to soar.

Yesterday, prices finally pushed past $4,000, setting a new milestone in Bitcoin history. Although the digital currency briefly fell back down to $3800 after grazing its high water mark, it has since recovered and is now trading for around $4,135 at the time of this writing.

So far 2017 has seen Bitcoin smash record after record. Not only did Bitcoin post all-time high prices on a nearly daily basis leading up to this benchmark, but it has also done so barely a week after its previous high of $3000.

A Rising Tide Lifts All Boats

Bitcoin was not the only digital currency to see bullish trends this past week. Ethereum’s price spiked up past $300, up from $220 following the breakout earlier this week. It has yet to return to its previous high of $400 seen in mid-June right before the end of the cryptocurrency market’s previous bull run.

Bitcoin Cash’s price also recovered some following losses during its first week of trading. From starting prices just above $200, BCH rose sharply to $378 on August 9 before settling again at around $300. 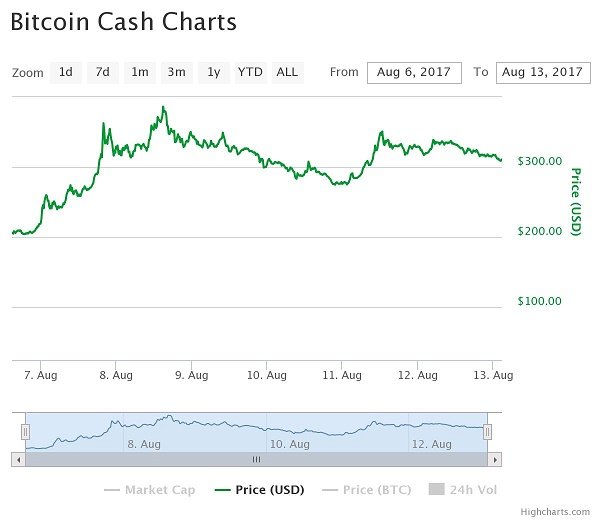 Litecoin also saw modest gains this week, up $2 from $46 last week. Ripple remains a notable outlier in this group. Although last week’s frenzy gave it a brief boost to $0.19, it has since fallen back down to its previous average of around $0.16

Chaos is a Ladder

The South China Morning Post attributes the rising value of cryptocurrency to heightened international tensions between North Korea and the United States. The paper calls digital currencies “an unlikely safe haven… as traditional refuges such as gold and US Treasuries lose some of their lustre [sic].”

Caught in between this fiery rhetoric is South Korea, a current hotspot for digital currencies. According to the SCMP, South Korea went into an Ethereum buying frenzy following US President Donald Trump’s threats against the DPRK:

The Korean won makes up more than 40 per cent of ethereum trading volume, the highest among currency pairs, according to CoinMarketcap. Ethereum rose 4 per cent on Thursday to US$304, near the highest since June.

The SCMP also notes that although Bitcoin’s notorious volatility is about 10 times that of gold, its decentralization promotes it as a safeguard against government turmoil. Bitcoin’s recent surge should, therefore, come as no shock to anyone.

The new price point confirms Goldman Sach’s own predictions on July 3 that Bitcoin would eventually hit $4,000. Goldman Sachs chart analyst, Sheba Jafari, predicted Bitcoin would fall to a low of $1,875 during a “corrective 4th wave” before recovering: 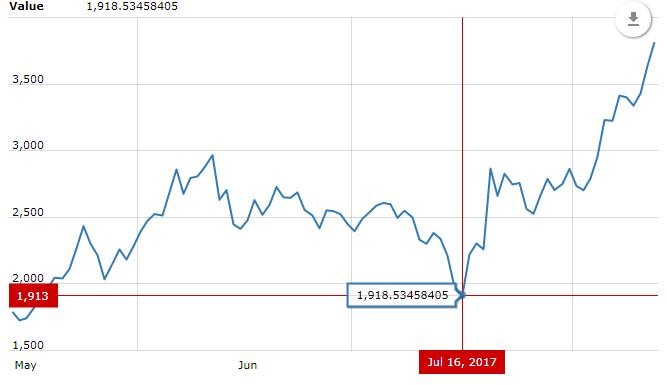 So far, both of these predictions have proven true. Bitcoin fell to just over $1,900 on July 19 amid the scaling debates leading up to August 1’s UASF activation. It quickly recovered following signaling for SegWit2x and has now soared past both of Goldman Sach’s min and max prediction.