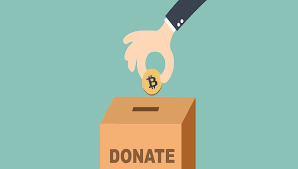 Bitcoin Donations Are Aiding Ukraine In Fight Against Russia

Bitcoin is helping to fund the Ukrainian fight against Russia. The conflict that has been on for a while has continued to rage on. This has led to a higher need for funds to aid in the fight. Volunteer organizations that provide the Ukrainian military with weapons and medical supplies have turned to crypto donations to keep the boat afloat, most especially bitcoin.

Elliptic, a blockchain analysts firm, has released a report that shows a trend in bitcoin donations to Ukrainian volunteer groups. The report showed that crypto donations to these volunteer organizations have grown significantly by more than 900% in just the span of a year.

Ukraine’s volunteer groups have been one of the leading support in the fight against Russia and they provide the services that they do through donations. The conflict which has now spanned a decade has been fought by volunteer groups who had to step in when the Ukrainian military could no longer do so. Together, these groups provide soldiers, weapons, and medical supplies to aid in the fight.

Mostly, the donations to the volunteer groups have come from private donates using mediums like bank wires and payment apps to donate funds that have run Ito the millions of dollars, the report notes. However, crypto-assets are fast becoming a popular way to provide donations too. It has grown into an important funding method for the volunteer groups with over half a million dollars already donated.

2021 was a year that crypto donations to Ukrainian volunteer groups shot up. During the same year, crypto donations had become more popular around the world with various causes choosing it to avoid sanctions from banks and the government. The growth recorded by volunteer groups in 2021 was significant given that in 2020, the number of crypto donations received by the groups was less than $50,000. This number had risen sharply the following year to over $570,000.

Volunteer group, the Ukrainian Cyber Alliance has received $100,000 via bitcoin donations, while Cyber Partisans has raised $84,000 from crypto donations.

Crypto donations to other volunteer groups around the world have also been on the rise. Recently, the Canadian truckers’ protests had received significant support with bitcoin donations. These donations have since ramped up with more than $680,000 in bitcoin raised by a single volunteer group alone.