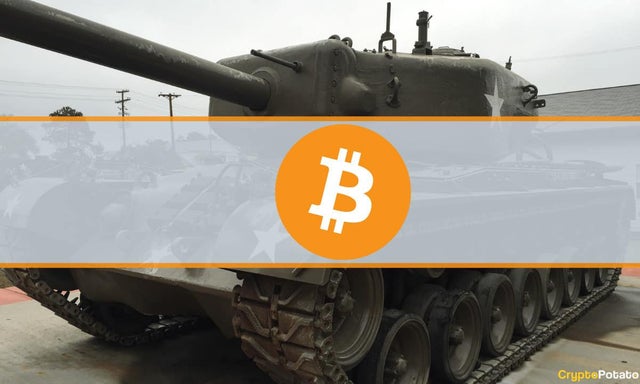 Bitcoin For A Tank — Hacker Group Offers $52,000 For Russian Troops To Surrender Their Tanks

Bombing your adversary is no longer the most effective method for winning a war. For example, this group of hackers is attempting to bargain with Russian troops fighting Ukraine by paying $52,000 in Bitcoin for a tank they give up.

Ukrainians have been retaliating digitally in order to hold their ground and prevent Russian military vehicles and artillery from rolling into the country.

Mykhailo Fedorov, Ukraine’s youngest minister, said a few days ago that the government will establish an “IT army” in an attempt to ward off the Russian invaders.

“We are in desperate need of digital talent. Everyone will have a task. We will continue to fight on the cyber front,” Fedorov was cited as saying by numerous news organizations.

The Bitcoin for a tank offer comes in the wake of reports that Russia is refusing to open its stock market on Thursday morning. This, despite initial assurances that it would delay the opening for a few hours.

Anonymous, the hacking collective, has launched multiple cyber-attacks against the former Soviet republic.

According to Ukrainian news sites, they are now offering Russian tank crews RUB5 million for each surrendered combat vehicle.

Anonymous advises Russian soldiers to lay down their guns with a white flag and scrawl the word “million” to indicate their acceptance of the terms.

Anonymous is a global “hacktivist” organization and movement most known for its numerous cyberattacks against various governments, institutions, and agencies.

Their motto is: “We are known as Anonymous. We do not pardon. We don’t forget. Expect us Anticipate our arrival.”

“Russian military and anybody else who wishes to live with their families and children and avoid death, the Anonymous global community has collected RUB1,225,043 in bitcoin to assist you,” Anonymous stated in a message.

At the end of February, Anonymous declared war on Russian President Vladimir Putin.

Putin Has Been Warned

At the time, the group warned Putin that if he continued his onslaught on Ukraine, he would suffer “unprecedented cyberattacks from all corners of the globe.”

Anonymous stated on Twitter “Hackers from all around the world are waging a cyberwar on Russia and Belarus in the name of Anonymous.

The group added: “Inform them that we do not forgive or forget. Anonymous owns fascists, always.”

Ukraine’s Ministry of Defense has also reportedly stated that it will grant amnesty to Russian forces surrendering.

Meanwhile, many Russians have turned to cryptocurrency as an alternative financial tool in the wake of the sanctions.

Despite several calls to discontinue servicing such individuals, prominent digital asset exchanges such as Binance and Kraken have chosen not to comply.